The most enduring images in American political life are those drawn from the natural world—rivers and springs reflect the ever-changing course of politics, monsters suggest the carefully apportioned boundaries of congressional districts, and animals have come to represent the major political parties.

This “Gerry-Mander” cartoon first appeared in the Boston Gazette, March 26, 1812, and was quickly reprinted in Federalist newspapers in Salem and Boston. The cartoon expressed opposition to state election districts newly redrawn by Massachusetts’ Jeffersonian Democratic-Republican Party, led by Governor Elbridge Gerry. Fearing that the Federalist Party would gain power in the 1812 election, Gerry consolidated Federalist voting strength in a salamander-shaped voting district. The practice—though not invented by Gerry—became known as a “gerrymandering.” 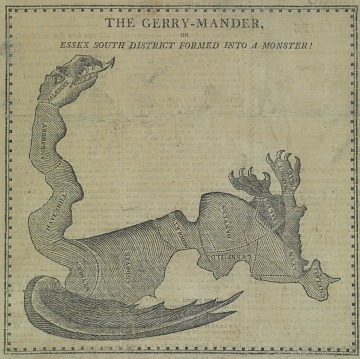 Gift of the Honorable Michael V. DiSalle in memory of Thomas H. Williams

The Rise and Fall of American Political Parties

“Diagram of the Rise and Fall of American Political Parties, from 1789 to 1880, inclusive,” from Conspectus of the History of Political Parties and the Federal Government, by Walter R. Houghton, 1880

This ambitious chart presents U.S. political history on a single page. Moving from left to right, a timeline of parties, policies, persons, and events courses like a river through graphic space marked in four-year intervals. The analogy between politics and springs and rivulets (that jump and rejoin their banks) is the most conspicuous feature of the timeline. The parties appear in different colors. The ascendance of a party is gauged as its stream rises above the centerline, and above the streams of other parties. The thickness of a stream indicates the party’s strength. The diagram is meant to dramatize U.S. political history in a more accessible shape for educators and to offer a ready reference for scholars, statisticians, and statesmen.

‹ Promoting the Candidates up Frontier Democracy ›