Voting rights expanded, contracted, and expanded again as Americans dealt with shifting issues of politics, race, class, and wealth. Each addition to the electorate brought a change to the balance of power and led to collisions between practical politics and America’s democratic ideal of government “by the people.” While some established voters believed that extending the vote to more Americans would strengthen the nation, others questioned including people who might not share their concerns, or who could threaten their control of the country’s political, social, and economic structures. 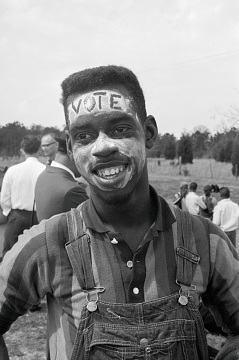 A young participant in the Selma voting rights march

The Constitution leaves the states to determine which of their residents can vote and how elections will take place. It gives the federal government authority to make laws concerning federal elections and an obligation to guarantee to every state a republican form of government. Constitutional amendments and some federal laws have attempted to protect voting rights from discrimination based on race, color, or sex, and to make voting easier.

1870: The Fifteenth Amendment stipulates that the rights of citizens, including the right to vote, cannot be denied because of race, color, or previous condition of servitude.

1875: The Supreme Court rules in Minor v. Happersett that the Constitution does not guarantee all citizens the right to vote.

1920: The Nineteenth Amendment stipulates that the rights of citizens to vote cannot be denied because of sex.

1942: The Soldier Voting Act guarantees the right of soldiers to vote in presidential and congressional elections during wartime.

1961: The Twenty-Third Amendment gives residents of the District of Columbia the right to vote in presidential elections.

1964: The Twenty-Fourth Amendment prohibits the use of poll taxes for federal elections.

1965: The Voting Rights Act requires preclearance before changing election procedures in designated areas where racial discrimination had prevented African Americans from voting and sends federal examiners to the South to register voters. The Act would be amended in 1970, 1975, 1982, and 2006.

1966: The Supreme Court rules in Harper v. Virginia Board of Elections that conditioning the right to vote in state elections on payment of poll taxes is unconstitutional.

1971: The Twenty-Sixth Amendment lowers the voting age from twenty-one to eighteen.

1974: The Supreme Court rules in Richardson v. Ramirez that states may deny the vote to convicted felons.

1993: The National Voter Registration Act allows voters to register by mail, while renewing or applying for a driver’s license, or at other public agencies.

‹ A Vote, A Voice up Sometimes It Takes an Amendment ›