What do we owe each other?

Religion and science have shaped debates over ethics, justice, and the greater good.

Just months before Henrietta Lacks died of cervical cancer in 1951, doctors harvested cells from her tumor without her consent. They found that Lacks’s cells were unique: cultured in the lab, they reproduced indefinitely—a first. Her cells revolutionized the development and testing of drugs and treatments, while earning pharmaceutical companies millions in profits. Yet the story behind HeLa cells, as they are known, is part of the long, tragic history of medicine’s exploitation of Black patients. Even as they continue to be used by researchers today, HeLa cells raise questions about patients’ rights, medical ethics, and systemic racism in the face of a perceived common good.

[THE FACE] For a long time Henrietta Lacks was lost to history. The Baltimore resident—raised on a tobacco farm in rural Virginia—was the working mother of five children. She lost her life to cervical cancer at the age of 31.

[THE WALLPAPER] The “Flower of Life” pattern of the wallpaper is a symbol of immortality. In a way, Henrietta Lacks is immortal. Cells taken from her body in 1951 are still alive today—which some people consider a miracle.

[THE HAT] The hat (or is it a ring of light?) suggests a halo, long used in art as a marker of holiness. Some of Lacks’s family members are devout Christians who believe the ongoing life of HeLa cells makes her a kind of angel.

[THE DRESS] The pattern of her dress suggests the replicated HeLa cells that have played a role in countless medical advances. The missing buttons on her dress symbolize the taking and using of her cells without her consent.

[THE BIBLE] The artist depicts Lacks holding the symbol of her faith over her body where HeLa cells were harvested, suggesting that scientific discoveries are open to religious interpretation. 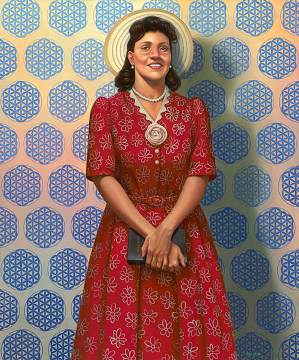