Expanded global trade and industry brought more ivory to more Americans than ever before.

By the mid-1800s the United States produced most of the world’s cotton, and it was so popular in Africa that merchants could use it to purchase vast quantities of ivory. At the same time, mechanized factories began to turn more tusks into more goods at a lower cost. From billiard balls in every saloon to a piano in every parlor, growing American ivory consumption contributed to shrinking elephant populations. Early warnings of the species' decline had no effect on the killing or consumer desire.

“This ruthless destruction of elephants cannot continue long. They cannot be bred in a year or two, and when once destroyed in any region can never be replaced.”
—Joseph Thomson, English explorer, 1881

Trading in tusks in East Africa, around 1900

Ivory had been traded around the world for centuries, but America's major supply centers gradually shifted from West Africa to East Africa over the course of the 1800s. The decline of the West African slave trade was crucial in this shift because the same trade routes brought enslaved people and ivory from the African interior to the coast for exportation. By the time Connecticut trader Ernst Moore posed for the photo here in Zanzibar with African porters and Arab and Indian merchants, 75% of the world's ivory shipped from that East African port. 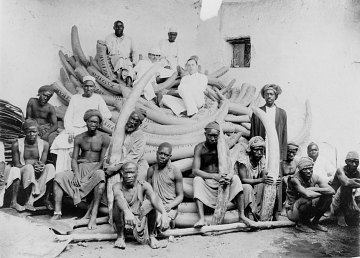 The opening of the Suez Canal in 1869 gradually made it faster and cheaper to import tusks from a range of ports in India and Europe rather than directly from East Africa. Tusks arrived from abroad in New York, then moved by smaller ships to Essex, Connecticut, and finally overland by wagons like this one to the ivory factories of the Connecticut River Valley. 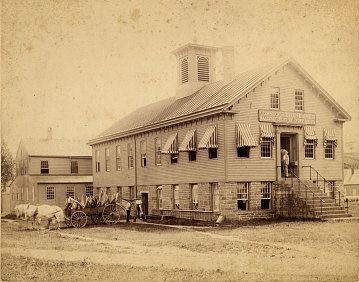 In the 1830s the cotton mills of Lowell, Massachusetts, began to supply plain undyed cloth to markets in East Africa. Known as merekani or amerikani in Swahili, this type of cloth was exported in large quantities for decades, and was a valuable medium of exchange for elephant tusks in the interior of East Africa.

Transfer from U.S. Department of Commerce, Bureau of Foreign and Domestic Commerce Dating from the days when local banks issued their own paper currency, this banknote featuring elephants reflects how crucial the ivory trade was to Connecticut’s economy.

Gift of The Chase Manhattan Bank

Craftsmen cut combs by hand, until in the 1790s inventor Phineas Pratt of Connecticut created a way to saw combs with a machine that saved time and labor. This effort helped transform the Lower Connecticut River Valley into the U.S. ivory center by the Civil War.

Gift of Comstock, Cheney, and Co. Machine-made comb, around 1890
Gift of Comstock, Cheney, and Co. 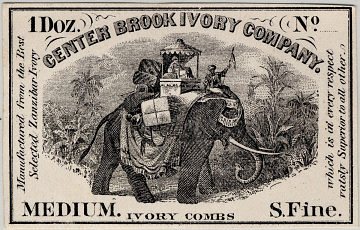 Advancements in making pianos made the instruments more affordable, just as the middle class that could newly afford them was expanding. Hundreds of thousands of pianos were made and sold between 1850 and 1930—and elephant ivory covered the white keys. With the widespread adoption of mass production techniques, consumers could afford even everyday objects made from ivory. “What a number of poor beasts have died for this ivory!”
—British Army Colonel Charles George Gordon, October 1875

Ivory’s strength made it ideal for billiard balls, but manufacturing them called for huge quantities of elephant tusks. Balls had to come from the center of a tusk in order to roll straight, so no more than five came from any one tusk. Because heat and humidity made balls lopsided over time, they were shaved down regularly and discarded once they were smaller than two inches. In 1863 a billiard hall owner concerned about the “dreadfully dear” price of ivory balls offered a prize for the invention of an ivory substitute. The competition led to the invention of celluloid, a plastic made in part from natural cellulose. Celluloid proved useful for countless products, but it was not as stable or hard as ivory. Box for Bakelite billiard balls, around 1910 “Every time someone buys an ivory bracelet, earrings, or some other trinket, they should realize that they are helping to put an elephant in his grave.”
—Wildlife conservationist Oria Douglas-Hamilton, 1980

Ivory products have continued to attract American buyers. The African Elephant Conservation Act of 1988 reduced the production of goods like these earrings in the United States. A stricter ban in 2016 on imports, exports, and interstate domestic trade of elephant ivory further constrained—but has not eliminated—Americans’ ability to fulfill their desire for ivory goods made elsewhere. “There is a lusciousness to the touch and feel of ivory, a smooth coolness, a purity. . . . I feed on it, I hunger for it, I can't get enough of it.”
—Ivory collector Dr. Samuel A. Schneidman, 1977