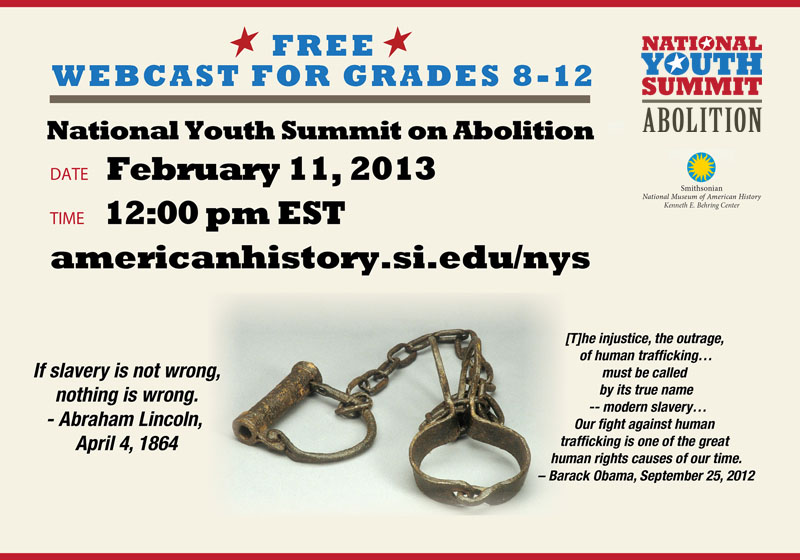 The Smithsonian’s National Museum of American History encourages students and teachers to use the lens of American history to understand current issues through an online-outreach program called the National Youth Summit. A Monday Feb. 11 National Youth Summit on Abolition will link the move to abolish slavery in the 19th century to today’s efforts to eradicate modern-day slavery and human trafficking. Experts, scholars and activists will join together in a live moderated panel discussion that combines film clips from the documentary The Abolitionists which recently aired on the PBS series, American Experience. Participants can visit https://americanhistory.si.edu/nys/abolition  to register and view the program streaming live either in classrooms or on personal computers at noon EST.

Through a partnership with the D.C. Arts and Humanities Education Collaborative, more than 240 public school students in Washington will convene at the museum and concurrent programs will take place at two Smithsonian Affiliate museums, the National Underground Freedom Center in Cincinnati and Heinz History Center in Pittsburgh.

The National Youth Summit is designed to provide students with an opportunity to share their views and debate an issue, and the program aligns with the Common Core Standards for Speaking and Listening. Panelists and the audience will explore tactics used by abolitionists and how those tactics are used today against modern-day slavery and human trafficking. Classroom teachers and other participants will receive a conversation kit, designed to provide ideas for leading discussion topics on abolition and modern-day slavery in age-appropriate ways.

The Abolitionists weaves together the stories of five of the abolition movement’s leading figures: Frederick Douglass, William Lloyd Garrison, Angelina Grimke, Harriet Beecher Stowe and John Brown. Their stories will be the basis of the Youth Summit panelists’ discussion. Panelists include  Lois A. Brown, Class of 1958 Distinguished Professor at Wesleyan University; Kenneth B. Morris Jr., founder and president of Frederick Douglass Family Foundation and descendant of Douglass and of Booker T. Washington; a representative from the U.S. Department of State Office to Monitor and Combat Trafficking in Persons and Hartford, Conn., student Ana Alarcon, who is president of Student Abolitionists Stopping Slavery. Alison Stewart, an award-winning journalist and former host of the PBS news magazine Need to Know, will moderate the discussion.

“The study of American history illuminates lessons learned and highlights possible ways of moving forward,” said John Gray, museum director. “With 2013 marking the 150th anniversary of the Emancipation Proclamation and the 50th anniversary of the March on Washington, the National Youth Summit on Abolition will help young people make connections between the past and present day issues.”

The National Youth Summit on Abolition is presented by the museum in collaboration with PBS’s American Experience and Smithsonian Affiliations and through the support of the Verizon Foundation. The program and its supporting materials were developed with the help of the National Underground Railroad Freedom Center, the U.S. Department of State Office to Monitor and Combat Trafficking in Persons, Polaris Project and Slavery Footprint.

The museum is currently renovating its west exhibition wing with new galleries on American business, democracy and culture; an education center; new spaces for the Lemelson Center for the Study of Invention and Innovation; public plazas; a Hall of Music for live performances; and the addition of a first-floor window wall with views to the Washington Monument. For more information, visit https://americanhistory.si.edu. The museum is located at 14th Street and Constitution Avenue N.W., and is open daily from 10 a.m. to 5:30 p.m. (closed Dec. 25). Admission is free. 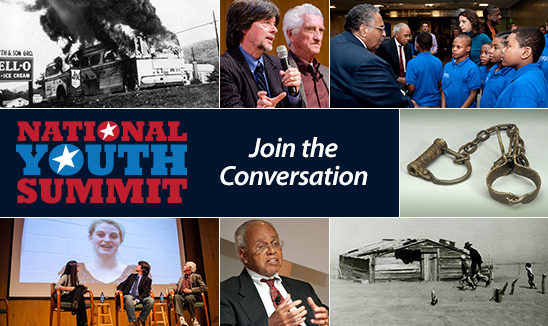