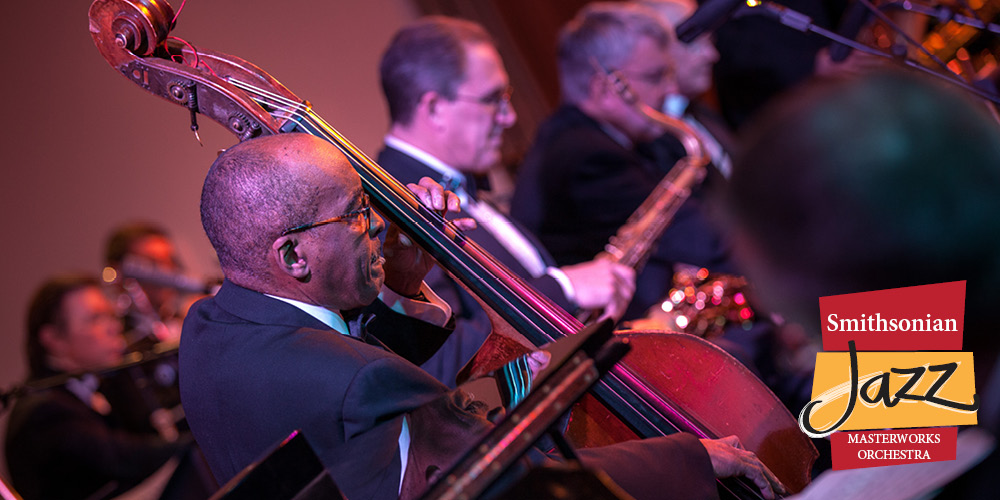 Purchase a 2019-2020 subscription and attend all four concerts at the museum for the price of three. For more information on subscription tickets, visit our FAQ page.

Recognized as one of the most prolific composers in world history, Duke Ellington composed purposeful music. Forever inspired by his insightful view of the world, Duke was able to capture his insight in sound and orchestrated musical genius. Among the 2000 compositions credited to Ellington are a number of large scale suites. The Smithsonian Jazz Masterworks Orchestra will present a concert celebrating the golden anniversary of Duke Ellington’s “New Orleans Suite,” a work dedicated to the rich heritage of the city. This concert will be presented by the DC Jazz Festival. Tickets and location will be announced at the end of January 2020.

Women in Jazz: On and Off the Concert Stage

Though often overlooked, the contributions of women have had, and continue to have, a dynamic impact on jazz. Their influence can be seen in the ways they’ve embraced opportunities for creative expression in the multifaceted field of jazz. As performers and conductors, as educators, and as producers and directors of jazz festivals, they’ve made their mark but still struggled for recognition on par with their male counterparts. To kick off our Jazz Appreciation Month festivities, the SJMO will highlight contributions to the field of jazz by select women, including Mary Lou Williams, the Sweethearts of Rhythm, Amy Shook, Leigh Pilzer, Jennifer Krupa, Amy Bormet, and those who have contributed off the concert stage.

"The President" Music and Legacy of Lester (Prez) Young: A Jazz and Cultural Giant

Saturday, February 22, 2020, at 7:30 p.m.
Nicholas F. and Eugenia Taubman Hall of Music
National Museum of American History
Tickets: $30 (15% off discount for students, young patrons 26 years old and younger, and members of the military)

Arguably, no musical instrument conjures up as clear a mental image of jazz as a tenor saxophone. Being a primary influence for many noteworthy musicians, including Charlie Parker and Stan Getz, tenor saxophonist Lester Young forged a voice in jazz all his own. Embracing a gentler approach to playing, Lester's style stood in bold contrast to the aggressive tenor styles of his era. Equally, Lester Young was the template for popular cultural jazz aesthetics. His jargon, dress, and swagger fueled generations of hip and cool—even before it was cool. The SJMO will present the music of Lester Young spanning three decades.

The undeniable link between Islam and jazz music led one critic to proclaim that the faith was the "unofficial religion of bebop." Alongside early converts such as William Evans (Yusef Lateef), Frederick Russell Jones (Ahmad Jamal), Leo Morris (Idris Muhammad), and Art Blakey (Abdullah Ibn Buhaina), many jazz musicians discovered a spiritual foundation that inspired strength and dignity through Islam. From Eastern modes to Western melodies, the impact of Islam on the soul of American jazz ranks second only to that of Southern black churches. In the big band format, the SJMO will present a program of jazz created, performed, and inspired by practitioners of Islam. Join us for a pre-concert talk by Hussein Rashid, PhD, lecturer at The New School, and founder of islamicate, a consultancy focusing on religious literacy and cultural competency. This concert is part of the Sounds of Faith series, examining the religious roots of American musical traditions.

Sounds of Faith programming is made possible by the generous support of Lilly Endowment Inc.

Saturday, October 26, 2019, at 7:30 p.m.
Nicholas F. and Eugenia Taubman Hall of Music
National Museum of American History
Tickets: $30 (15% off discount for students, young patrons 26 years old and younger, and members of the military)

Switching from piano to drums at an early age, Pittsburgh native Art Blakey embarked on an impressive career in jazz. After establishing a strong foundation through working with Mary Lou Williams, Fletcher Henderson, and others, in 1954 Blakey collaborated with pianist Horace Silver and cofounded the Jazz Messengers. Through its 35-year history, the Messengers was the fertile ground that nurtured the careers of some of the most important names in modern jazz. The SJMO will stroll down memory lane performing the music of Art Blakey in celebration of his centennial year.

Smithsonian Jazz is made possible through leadership support from: