Tesla: Inventor of the Electrical Age Lecture and Book Signing 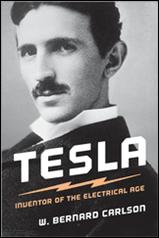 National Museum of American History
Warner Bros. Theater, 1st Floor
Tesla-related objects from the Museum collections will be on view!

In his new biography, former Smithsonian Institution and Lemelson Center fellow Bernie Carlson places the legendary Serbian-American inventor Nikola Tesla within the cultural and technological context of his time and focuses on his inventions as well as the creation and maintenance of his celebrity. Drawing on original documents from Tesla's private and public life – including collections at the National Museum of American History - Carlson shows how he was an "idealist" inventor who sought the perfect experimental realization of a great idea or principle, and who skillfully sold his inventions to the public through mythmaking and illusion.  This major biography sheds new light on Tesla's visionary approach to invention and the business strategies behind his most important technological breakthroughs.

The lecture is free and open to the public - first come, first seated.

Presented by the Smithsonian’s Lemelson Center for the Study of Invention and Innovation, the NMAH Bookstore, and Princeton University Press.