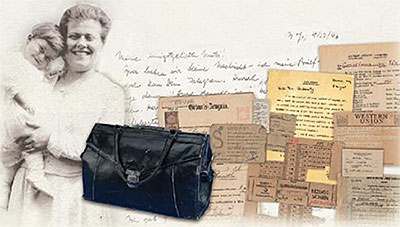 Holocaust survivor Camilla Gottlieb’s ordinary life in Vienna was upended by World War II into crisis, imprisonment, and ultimately a new life in the United States. Her purse, discovered by her family after her death in 1964, contained letters and papers that trace her trials and triumphs. These documents reveal a compelling story of captivity in the Theresienstadt concentration camp to eventual reunion with her daughter in New York.

On view in this exhibit were the purse; her 1884 birth certificate; the suitcase, with her identification tag, that she carried during her journey to America; and various personal items collected from her time in the camp through her new life in America.