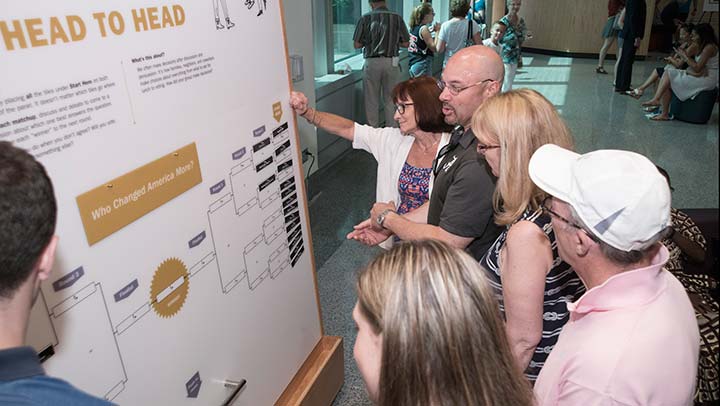 From the halls of Congress to the community centers in our smallest towns, America was and continues to be built by the participation of its people. Wallace H. Coulter Unity Square, at the heart of NMAH’s second floor transformation, is where history will inspire you to participate—in the museum and in civic life.

At the heart of Coulter Unity Square sits one of the Museum’s treasured artifacts, the Greensboro lunch counter. Racial segregation was still legal in the United States on February 1, 1960, when four African American college students sat down at this Woolworth counter in Greensboro, North Carolina. When the students politely asked for service at this “whites only” counter, their request was refused. When asked to leave, they remained in their seats. Their sit-in drew national attention and helped ignite a youth-led movement to challenge racial inequality throughout the South.

An interactive theater program, “Join the Student Sit-ins,” brings the story of the lunch counter to life on selected days of the week. Check the calendar for days and times.

Please note: To help slow the spread of COVID-19, the American Experiments activities are temporarily unavailable.

Unity Square is home to American Experiments, a set of activities that invite you to explore, play, and connect with the people around you. Four experiments bring to life the themes of the surrounding exhibitions—participation, commitment, negotiation, voting, protest, and pluralism. You’ll reflect on the history of the nation we build together and consider your own role in creating the nation of tomorrow.

Do Americans share a common set of ideals? This multiplayer card game asks you to match words commonly associated with American ideals with images you feel best represent them. Next, compare and contrast: what did your fellow players choose, and why?

Some goals can only be achieved when people work together. Join hands to complete a circuit and trigger iconic American songs. As the music plays, enjoy the monumental vista of our National Mall and learn about the historic celebrations and protests that have taken place there.

After exploring the U.S. Naturalization Oath of Allegiance taken by candidates for citizenship, reflect on what it means to be a good citizen. Share your thoughts via social media using #myfellowcitizens.

What food is more American? Who changed America more?  Use this oversized sports playoff-style bracket to persuade, negotiate, and vote to determine an answer. This simple activity reveals a complex set of beliefs, stories, and perspectives that color our sense of who we are as a nation.

Where Do You Stand?

Questions about voting and protest in American history spark conversation about how individuals view their rights and responsibilities as members of a democracy.

“American Experiments” was developed by the National Museum of American History in collaboration with the Exploratorium of San Francisco, and was made possible by a gift from the Julie and Greg Flynn Family Fund.

Four historical images from the museum’s collection frame Unity Square—each depicting people coming together to participate in civic activity, from protest to celebration.

See related classroom resources that challenge students to think about their roles and responsibilities within their democracy.