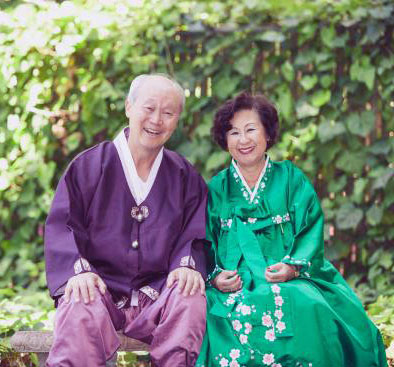 Bill and Mary Kim, Chairman and CEO, Louis Raphael/Kizan International, Inc.; excerpted from an interview with Bill Yeingst of the National Museum of American History, November 19, 2014.

Bill: I came to America in 1964. I was 18 years old. Korea was very poor—I think the GDP of South Korea then was under $500 a year, so you can imagine the life conditions. So for an adolescent, I wanted the opportunity to broaden my dream, become successful, and go to college. All this was my dream, so when I was allowed to come to America, it was just a blessing. When I landed in Los Angeles I could not believe my eyes, how wide it was. When I saw the Santa Monica Freeway I didn't know what it was. It looked like a huge parking lot. My brother drove me and I thought he kept going on parking lots.

I couldn't speak the language, and I had to work right away to feed myself. In fact, my brother bought me the plane ticket, and the day when I came he gave me this book. It turned out to be a payment book to pay for my plane ticket. The next day he took me to Social Security Office and got me a Social Security number. The third day I started looking for job. I found a job working for a beach umbrella manufacturing company where I was a painter, painting the beach umbrella pole, all day. It was hard work, but I did it and I knew that I was making money, so this was just how I started.

America was always a dream place for us to go. I went from very old village, farm village, to medium sized city to Taegu, then went to Seoul, and then went to United States. I’d never left Korea but it was such a dream, and the dream overcame any kind of fears about the trip. Life was very difficult because I had to go to school; I had to work odd jobs and different kinds of jobs that can give me income. I slept probably four or five hours a day, and it was difficult, but of course, I was young and very ambitious. In 1967, I started selling wigs. I wasn't shy [and would] go to beauty salons and face the ladies, and show my wig collections. If I sold one or two a day, that was enough income. I got married in 1968—we met at the language school actually, in 1964.

Mary: I came from Seoul. My brother was here in the United States. He came to the United States in 1957 and then I came 1964. My brother encouraged me to come to go to college. Unfortunately, when I came to the United States, my father got ill so [my brother] could not help me. Like Bill's brother did, my brother gave me a payment book to pay for my airplane ticket. I had to get a job right away. I got a job at the assembly factory; I was minimum wage. Later on, I had three children and [when] my youngest child went to first grade, I went back to school.

Bill: I went to really selling wigs. I moved to San Francisco in 1972, and I started my company, Kizan International, selling wigs. “Kizan” [comes from] my “K,” “I,” and my classmate/partner, Japanese American Mike Shigezane, with “Z,” “A,” “N.” So we put it together and made a name, Kizan International. We imported wigs and distributed as a wholesaler to beauty salons and beauty suppliers, wig shops. So it was a wholesale company. I already had some selling experience so I did very well. But the wig business started going down probably about 1974, 1975, so I knew I had to start something else. So I started searching and I found [the] LED watch—it’s watch that you push the button and the light comes on. Light Emitting Diode, that's LED. When I saw that product, I said, “This is fascinating and I want to change my career and go into electronics.” I went to a module manufacturer in Silicon Valley, and I said “I am an importer of wigs, but I do have some connections in Korea. I can manufacture watches, and I'd like to purchase modules.” So I did, and then I took the modules to Korea. I put together watches, [and] I started selling. I did very well. The cost was low and there was a lot of profit to be made, and I started immediately – it was very successful. So that drove me to think that if I really built big volume, I could make a big success out of it. I purchased 10,000 units, and I went to a bank and borrowed money and started really expanding. But like most electronic products, the price started plummeting, and in less than six months the market was down to actually below my cost. So I lost my shirt. I was in big debt.

What other good business can I expand into? It was the clothing. Clothing was the natural progression in [the] importation business. So clothing was something that I wanted to start, but I didn't know how to start it. I saw these gabardine pants and [my friend] said, “This fabric comes from Korea, and if we can manufacture these pants, you will be able to sell a lot, and you'll make a lot of money.” So I said, “Let's do it.” Then I was still very young, so I took that information and went to Korea, and located the fabric manufacturer and placed the order. I refinanced my house. I told myself, “This is it. If I don't make it, I'll lose everything and will have to bankrupt the company or lose everything.” Well that shipment of pants that I brought, I started selling, and I went to trade shows, different small trade shows and I displayed my pants and started selling. It was amazing, I was selling and there were people who were coming to look at the pants. I bragged [about] being a businessman, and I have background in Korea. They thought I really had the big support! So I kept selling, and I had clients, and they liked the pants. I just learned as I went, and I had this entrepreneurial spirit. These days I do some public speeches for young Korean-Americans. My topics are always about entrepreneurial spirit. You have to have that entrepreneurial spirit and the real desire. Of course, you have to analyze, you have to really have many sleepless nights, but after all, it's a conviction [to] take certain risks and execute your idea.

America is still the place where immigrants like us can achieve our dreams. I think it's different than when we came 50 years ago, and I'm sure our life was different than when Andrew Carnegie came. But I think there are opportunities, chances for pursuing your dreams. There may not be as much labor work as it was, looking at Silicon Valley for instance. One thing about Americans, they will accommodate new commerce like they did for us.

Mary: When we have a New Year, we have Korean food together, and I cook. My children enjoy the cooking. We have Korean dress, everybody wearing Korean dresses, and we bow for Happy New Year to elderly people. So that's tradition, culture – that's the day we feel Korean. For Thanksgiving, I usually cook turkey. Now my daughter is married so we go to our daughter's house, and her mother-in-law and father-in-law invite us, and I share. We just blend and have a good time. We get together and celebrate like Americans do at Thanksgiving.

Bill: One of the things that I like to teach our children is Korean heritage. I think it's very important to continue, so I have my father's book collections that I think is very valuable. I do try to teach our children Korean traditions such as Confucianism; the meaning behind how Koreans have historically survived history itself. These are very important things. I think there are American values that blend with Asian-Korean, for instance. There are really good traditions such as (talking about food) kimchi became really international. There are a lot of traditions that should be preserved, and I like to be part of that tradition and help the next generation.

Mary: Our daughter, she cooks Korean food and now she has a six-year old daughter. Whenever I go to Korea, I buy Korean storybooks and read for her. My daughter, she's open minded. She's very westernized. My friends around us, our generation, they ask [their] children, “Become a lawyer, you better become a doctor, you better become a professional.” But I [wanted] them to travel. Because when they travel, they open their eyes, open their minds, they see our world. Other Korean mothers, Asian mothers, they don't allow children to go far away, even during the summer. But not me. I sent them every summer to somewhere.

Bill: The world became so small. You know, it’s amazing. We go to Korea, and Korea became very advanced. I do miss old traditions and luckily, I came from an old traditional family. We still preserve a lot of old shrines, family shrines and the home, so we're very lucky in that aspect. 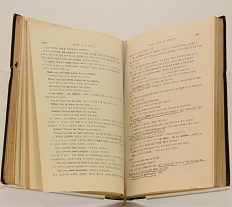 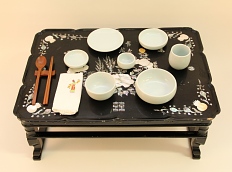 Place setting and tray used by the Kim family to serve Korean food.