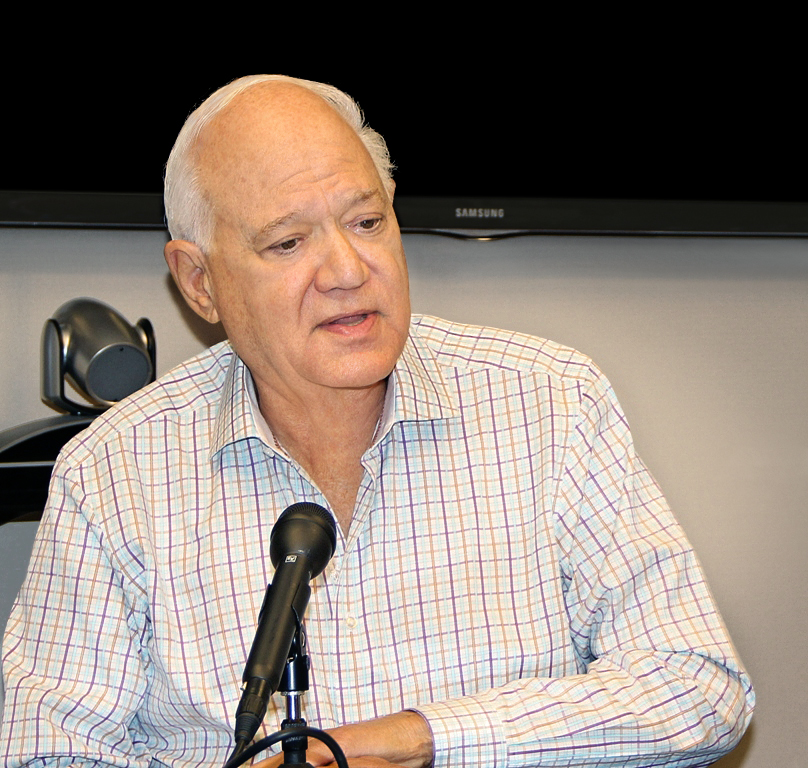 Mr. George Feldenkreis, Chairman and CEO of Perry Ellis International; excerpted from an interview with the National Museum of American History, July 17, 2014. Edited for clarity by Mr. Feldenkreis, March 2015.

I was born in Havana, Cuba. My mother and father arrived to Cuba in 1923 from the region that is today Ukraine. At that time, there was an immigration influx of Eastern European Jews trying to enter the United States.  Unfortunately, around that time, the United States had passed the first quotas of immigration [The Immigration Act of 1924 limited the number of immigrants allowed into the United States based on national origins], so most of the Jews who arrived to Cuba in those years were denied entry into the United States beforehand. The same was true with my mother and her father.  My father’s brother had arrived to Cleveland in 1913, and I suppose he was trying to help my father come in. There are several versions as to why people migrated to Cuba, one of the most popular being that it was a cheaper fare than going to México or Argentina, which explains the scope of the Cuban Jewish community in Cuba.

My father felt that if I knew English well, it would be enough to make a living in Cuba.  Therefore, as a teenager he enrolled me into an English school for adults, and I reluctantly attended. I was always the youngest kid in that school.  However, as much as I hated it at the time, it was what truly saved my life and put me on the right track because when I came here, I had a respectable understanding of the language – although I have not been able to drop the accent. I like to think that my English grammar and spelling is better than that of many people who have had their education in the United States.

At the age of 15, I began my first job working for the Zionist organization in Havana in their fundraising office. I was a pretty good typist. Two years later, the Israel Bonds organization (which is different from the Zionist organization) opened up an office in Havana. At the age of 17, I was hired as a representative of the office of the Bonds in Havana.  This job allowed me to go to law school and become an attorney. During my last year in law school, I started to write letters to many Japanese companies – some of them quite large – offering my services as their representative in Cuba, a business I learned from my father. Once I was given the opportunity to represent them, I began hiring salesmen with my brother, who had a store and a little bit of money (while I had none), and we started to develop a business selling Japanese products.

I had many friends who were involved in the revolution, some of whom I helped--the university students were very involved throughout the entire process. On January 8, 1959, when I was 23, I got a managing position with the revolutionary government as an “Interventor” (controller-trustee) of a large construction company with more than 700 employees, which has been taken over by the government. Once Che Guevara became the president of the National Bank of Cuba on December of ’59, he completely destroyed the private enterprise sector. After this transpired, I told my brother it was time to go.  With the experiences I had undergone with some people in the higher echelons of the revolution, I knew it was a done deal: Cuba was going to become communist.  As a result, my brother and his family came to Miami in May of ’60. I visited them a couple of times to see how they were doing. On February 16, 1961, I came to Miami, arriving with only $700. My 8-month pregnant wife arrived on March 18, one month later, with my son, Oscar.

A few days after my arrival, I received a call informing me that the Cuban police was searching for me. Some of my friends had been caught by the police, and my name was on a list. So I never went back to Cuba. In April, the Bay of Pigs invasion failed and I knew I had to stay in the USA and decide how I was going to support my family.

A few months later my brother told me, "Look, we have more opportunities in Puerto Rico. We speak the language, we know the culture, let’s go." I told him, "You know something; I don’t want the experience our father had, coming from Ukraine to Cuba, only to have to leave Cuba as well. I want to live under the American flag. I don’t want to go anywhere else."  And that is what I did.

I would regularly frequent the US Department of Commerce office in Miami to learn about what was being imported into the United States. I knew that Miami wasn’t the greatest business place, especially in 1961, so the idea was to find those items imported into the United States which I could get the opportunity to represent, or that I could obtain from Japan at a cheaper price than wherever anybody else was buying. It was through this channel that I met some friends I knew from Cuba who had a small sum of money. They became my partners, and I received one-third of the company that we formed to sell automobile parts and anything else we could acquire.  With this opportunity, I officially began my business career in the United States, and more specifically, it is how I started in the automotive and motorcycle business under the name Carfel Inc.  At the time, motorcycles were becoming increasingly popular – beginning with Honda and followed by Yamaha, Kawasaki, and Suzuki.  Years later, Carfel became a pioneer in importing Japanese car automatic transmission parts.

On the apparel side, I took my children to Puerto Rico in ’66, so they could get to know my brother, who had become a manufacturer rep for American apparel importers. In Puerto Rico, public schools require students to wear a uniform, which consist of six colors of shirts (for boys), blouses (for girls), and pants. From a manufacturing standpoint, it was a very simple process to achieve. I found a manufacturer in Japan that could produce the uniforms; we became very successful and began importing apparel into Puerto Rico under the name Supreme International Corp. In 2000, Supreme became Perry Ellis International.

Fast forward three years, and every Cuban in Miami was asking for guayaberas [a traditional piece of menswear, it is distinguished by its four front pockets and two vertical rows--either pleated or embroidered]. I had heard that some people in Aruba and México were importing guayaberas from Japan, so when I went back, I sat with the Japanese manufacturer who was producing my shirts and I asked them, "Do you make guayaberas here?" Nobody knew what a guayabera was, so I got a pencil and sketched one for them right there. One Japanese looked at the sketch and said "Wait a minute, please!" He came back a few minutes later with a guayabera, and there was a sudden realization amongst the Japanese as one said, "Oh, a Mexican wedding shirt!" I asked them for the price, and they replied, "It’s $18.00 a dozen." I immediately said, "Give me 500 dozen," and we began selling them for $60.00 a dozen. With that, we developed what was a healthy profit in those days for us and we began to make real money for the first time.

Migration is not only difficult, it is also very traumatic if you have not gone through the experience. It’s very painful to know that you’re leaving all your friends, that you’re leaving your family, that you're losing the security – the sense of belonging. This is especially true if you arrive without money, because you are not sure where and when your food is going to come next, where you’re going to go to work, where you are going to live, and so on – the list of uncertainties is endless.  As such, the act of deciding to immigrate, to go somewhere else, is something very traumatic and something that is only done for very powerful reasons.

Personally, I feel that I’m a "bridge person," having been on the board of the Greater Miami Jewish Federation since the early '70s as the first Hispanic member. I have developed many friendships, and have made friends in many businesses. I have many friends from different nationalities and from different religious backgrounds. I am truly very proud to be able to represent a different culture among different ethnic groups. I feel very American, and I love this country more than most Americans who are born in the United States. I am very proud and lucky that I've been able to inculcate to my children the same things that my father taught me.  This is sincerely the best country in the world.

I am most proud of my family – mainly, because my son and daughter work with me.  Having a business where you can have your family come together for lunch every day is a completely different experience, to be able to sit down with your children on a daily basis. Secondly, I am proud of the fact that I employ over 2,000 people. We have been able to create and grow such an enormous company out of nowhere, out of nothing.  A few years ago, Perry Ellis International did not exist – I am very proud of that accomplishment. I am also proud of my charity work; I have always believed that if you make money, you should give back.  I am very proud of the contributions I have made to the lives of so many people that I know appreciate it very much, to be able to give and continue giving to society – I think it is important. And to this great country, I owe everything. I am wholly and completely American.