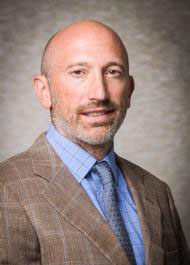 I was born in Santiago, Chile. I was actually born with a U.S. and a Chilean passport. My mother came to Chile when she was 19. She had dropped out of Northwestern, where she had been an undergraduate, and met my dad, who was a graduate student on a Fulbright Scholarship, and so they went back to Chile in 1966. The issue of "was I Chilean and then American," or "American and then Chilean" was probably something that was discussed in the waiting room as I was waiting to be born by my sets of grandparents. I think the only thing they could agree on was that I wasn't Italian (my grandfather on my father's side was an Italian immigrant who came to Chile).

The house I grew up in was in a bit of a rural area and my grandfather lived in one home, and he just spoke Italian. He had lived in Chile for 40 years and just spoke Italian. And my mother spoke to me in Spanish, which clearly wasn't her mother tongue. She didn't really learn Spanish until she was 19, so it was halting and jarring, but she did speak to me in Spanish. My dad would speak to me in English because I think he thought that was a great way to improve his English. My grandmother would speak to my grandfather in Italian just because she thought that was interesting. The whole issue of being born right in the middle between two cultures has been a big part of my journey as a human being. Even when I called up my mother and said, “There's this exhibition on the immigrants' stories at the Smithsonian.” She said, “But you're not an immigrant. They don't need to talk to people like you.” Even within my family as recently as three months ago [there is] this whole notion: “What's an immigrant?”

Being American in Chile at the time was definitely an advantage. Because of the economic policies of the Chilean government in the late ‘60s, there were food lines, and there were coupon ration books. I would go wait in a very long line with my grandmother to buy some chicken and bread, some basic staples and would come home. And then with my mother, we'd take the bus to the American Embassy [which] had sort of a mini-market where you could go, and buy a lot more stuff, and not wait at all. My mother ultimately was an American from Chevy Chase [Maryland, outside Washington D.C.] and for Thanksgiving we would have turkey. My grandparents in the U.S. would call on Sundays, and I was always just really fascinated with their phone calls. I would play with the phone constantly, pick it up, and hope they were on the phone. My parents would get so tired of me asking them repeatedly (as only a four or five year old really can), “What time is it in Washington? What time is it in Washington?” [So] over the mantle, they had a clock that always showed the Washington time.

As I got a little bit older, six or seven, [I felt] a little guilty that I had the opportunity to go and see my grandparents and my mother spoke English. I was able to speak English and a lot of the kids couldn't. It wasn't something we talked about a whole lot. I would come up and see my grandparents, then my grandparents from the U.S. would come to Chile. I remember the bicentennial. There was a bicentennial parade and I was nine years old. It was just the most incredible thing I could have ever imagined: people were dressed up in colonial clothes; some kind of mock battle scene; the hotdog stands; the fireworks. It really blew my mind and the people seemed so united. At the time in Chile, we had gone through this socialist experiment revolution when I was a kid, and that ended with a military dictatorship when I was six. In '73, there was this military dictatorship and coup. There was a curfew and things were very controlled. So coming here, this was just such a celebration of country. It seemed amazing to me. I saw people needlepointing and I was curious, so my grandmother got me a needlepoint kit that was quite large with an American eagle. She sent me back to Chile with that. My grandmother in Chile and I worked on it for the next few months. Then the next time I came up to the States, my American grandmother was so impressed that I'd made all this progress, that I had to admit that my grandmother in Chile had helped me with it. It was sort of one of these projects that showed me that even though my grandmothers were very different, this needlepoint sort of made them both literally be on the same page in my mind. I'm sure there were times that they must have had meals together, but they had a cultural barrier, a social barrier, a language barrier, all these barriers, but in this needlepoint of this American eagle, they both were able to meet.

We moved to New York City, and my parents bought a house in New Jersey. I just settled into being an American suburban kid. But I remember there was a random day in a gym class and the gym teacher gets me and says, “You speak Spanish, right?” I was like “Yeah, yeah, I think so.” It was literally like I hadn't even thought about that, when you just want to assimilate…It was almost like that was not who I was at that moment. There was a kid named Carlos who had just sort of shown up at the school. He didn't speak any English and they needed somebody to explain to him, and I still remember going into the locker room and the gym teacher saying, “Okay, explain to him this is his locker. Explain this, explain that.” It was very odd because I felt like I was becoming a different person and I actually began crying when it happened. It almost felt like this part of me that I'd been ignoring; it was sort of intruding a little bit on this image of myself. Then Carlos and I actually ended up being good friends and playing on the soccer team. Even though he wasn't from Chile, it was a real connection to my Latin roots in a way that probably if I hadn't met him, would have taken me longer to reconnect fully.

My parents came to the U.S. for economic opportunity and for democracy, I think like most people. I can say for my life that made all the difference. I would never have had the opportunities that I've had, had I stayed in Chile. And I say that sadly. I wish that weren't the case, but that's a reality. I went to Duke University. When I got to Duke, I felt pretty isolated. I did make a few friends. There was an Argentine friend of mine and a woman who was from Venezuela. So probably I was discovering my Latin roots in some way. I went to NYU Law School, and there was a Latino student organization and I was dating somebody from Latin America. I did really get the sense, “Okay, when I'm done with law school, this 10 years or whatever that I've been in the U.S., I need to go back to Chile and bathe myself in that copper-laden Chilean water. I need to go back and become more Chilean.” So that's what I did. After law school, I went back to Chile and was a lawyer at one of the leading law firms in Chile. It was probably 30 lawyers and I remember the first day walking around, sort of being introduced to every lawyer, and there were five Juans and four Juan Pablos. I don't think I'd ever been anywhere in the U.S., and certainly not at Duke, where there was one other Juan, and never a Juan Pablo. I remember feeling like I was a plant, like something that had been pulled out or clipped off a little bit, [and] was being given a chance to grow back.

I really feel like when I'm speaking English, I'm one person and that person went to Duke, went to NYU Law School and went to high school. When I'm speaking Spanish, I'm a different person and that person lived in Chile as a kid, lived in Puerto Rico, hugged his grandmother, “su abuelita,” and buried his aunts. I'm just a different person. I have different values. I think I cherish slightly different things. I don't know if it’s the language or it’s the experience I've had in the language. Miami is a city of 2.8 million people, and there's 2.2 million Latinos or Hispanics. For me, what's been actually really liberating is that I don’t need to worry or be concerned “am I Chilean or am I American?” I really do feel in Miami like I'm just home because there's so many people who have very different stories, but stories so much like mine. Miami allows me to care less about being American or Chilean. It allows me to focus on me.

For me the aspirational vision of being American is really being able to forget the class you're from, the race you're from and being able to focus on sort of the road ahead, the opportunity, how much work you're willing to put into it and how you define success. 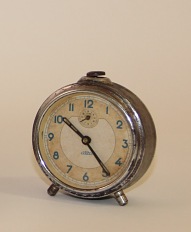 Clock used by the Cappello family in Chile to show the time in Washington, D.C. where Juan Pablo's American grandparents live. 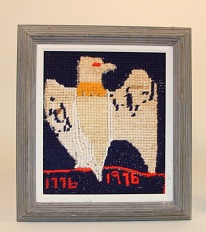 Embroidery of American Bicentennial Eagle completed by Juan Pablo with the assistance of his American and Chilean grandmothers.