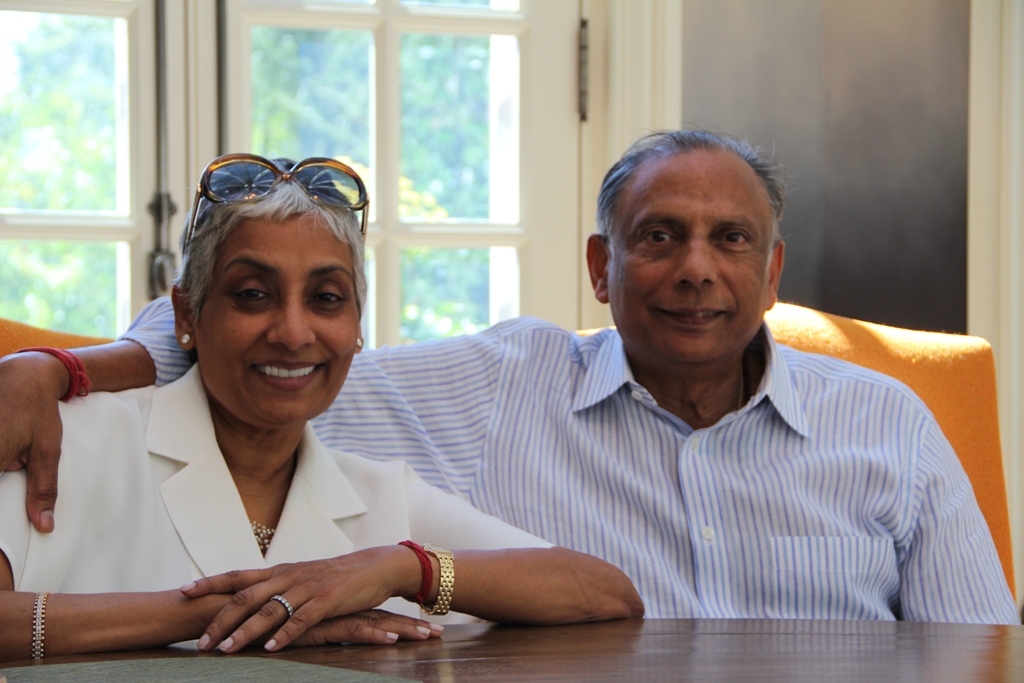 Rajendra “Raj” and Padma Vattikuti, Founders of the Vattikuti Foundation; excerpted from an interview with the National Museum of American History, September 8, 2014

Raj: I was born in Andhra Pradesh, India.

Padma: I also was born in Andhra Pradesh, India. In 1977, we were married.  Ours was an arranged marriage, so I followed Raj a year later and came to this country where I had no friends and no relatives and a husband who was practically a stranger to me. But if I have to marry him all over again now, in a blink of an eye, I would do it.

Raj: I came as a student. The first two days I was very depressed in Detroit, but then I had to make the best use of it because education was the most important.  So I had made a lot of friends--not only people here but also people from other parts of the world. We used to go to the Greek town in Detroit where we could for $5.00 get a nice meal.  We could even take a date for $5.00 in those days!

I was lucky right after graduation. I had a good job working in the automotive industry and learned a lot of things--how to manage a business, how to run a business. I always wanted to be an entrepreneur. So then it was difficult because I had company cars and everything else, but I had to give up all that and start from the beginning with five employees.

Mainly at that time, the technology industry was not matured.  Everything had to be very experienced people and projects are very expensive.  I felt [there was a] better way of doing it: you can take your college graduates, train them quickly and then do it.  So basically I wanted to change the whole technology model and that's what has helped to revolutionize the whole IT industry. I saw the great talent in India [but at] that time industry in India was only half a billion dollars.  Today it's over $100 billion.  It's a benefit for both the countries in terms of U.S./Silicon Valley able to scale up, grow, come up with a lot of innovation by leveraging their skill sets, and then India was really able to leverage the education.

Padma: America gave us such opportunity.  We had to think like Americans and become an American.  It took a longer time for me to come to terms with it because I always carried India in my heart.  Anytime I thought of home, I would always say I would like to go home, that meant India. Now when I'm visiting India and I say I'm missing home, it is America now.  As our lives evolved, our thought process changed drastically because of the opportunities America provided.

When I left India, one suitcase is all I brought because there were weight restrictions. But I paid extra money because he wanted me to bring my musical instrument.  I was learning sitar in India so he wanted to bring it back. There were a lot of things that families didn't know, because we were one of the earlier ones: what was available here or not? So they wanted to stuff things from groceries, thinking that we might be starving here! So they put all of this in the hand luggage for me and it was so heavy.  When I left India, I came here with such apprehension not knowing what my life would be like. It's an entirely different culture, no friends, no relatives. Raj did have a brother but I did not know them very well.  They turned out to be really lovely people and took care of me and guided me.

The reason that we have not moved from Detroit in all these many years is all of the people who made the fabric of our lives are here. We are so closely entwined in each of those lives.  That's a huge, huge support system for both of us and when we think of family, even though we are close to our families in India, they're so far away.  It's our friends here who we immediately think of as family. So that's one of the reasons I think we remained in this Metro Detroit area.

Raj: Really, learn how to blend both the cultures.  The American culture brings professionalism, opportunities, and the Indian culture is [a] give or take approach. Those are the kinds of balance a lot of our customers always like, compared to dealing with the big companies.  They dealt with us because we're always flexible. [The] give and take approach is what really helped us to forge a relationship with the customers. The two things that really helped me is Dale Carnegie, when I was in school, I read his book, [How to Win Friends and Influence People].  He always said you put yourself in the other person's shoes.  Think like them, everything will come to you.  I apply that always in myself personally.  Even today, I tell all my employees, “think what they want, what they need, what their challenges are.”  We can really do that. Second one is John Kennedy always said preparation, preparation, details, details.  That really also helped.

Raj: Initially when I came, I used to write letters but now you know, after four or five years, I stopped writing letters.

Padma: Phone calls were so expensive then.  I used to have a continuous letter that I would date and then every 10 days I would mail it, several pages of it.  Even to make a call, it was so difficult because you needed to speak to a certain person. You had to make a person to person call; and the operator, when she connected there, then they would call us back: sometimes half hour, sometimes [a] couple hours.  The world has changed.  It's become so small and how you can communicate, travel, all of that.

Raj: In terms of giving to the community, I think like [an] American very much more than Indian. When it comes to the values and the balancing the life, I think more Indian. When it comes to professional life, when being very professional, high integrity and honesty, a lot comes from the American aspect of life. And when it comes to really day to day giving and taking, a lot of the Indian life, so kind of balancing at each level. I guess it really doesn't matter--American or Indian--but how you apply yourself.

The spiritual life helps a lot.  Just sitting, I get so many ideas just thinking, sitting down and thinking about spiritually and things like that so, it's really…it's a blended aspect of it. I'm sure many people have the same way and even the Americans. I know a lot of my friends, they have changed quite a bit through traveling the world, seeing the people.

Padma: I find it a great strength giving back to the community.  The highs you get from doing so …you can't equal at anything else.  Thank god for the children, and Raj, and health, and all other things that we have, but I think helping people in need--that gives me great joy.

Raj: One thing learned in the giving [through the Vattikuti Foundation]: it's not just giving the money.  It's giving your time and your ideas and thought process and making an impact.  I think that's really very important.  I think younger children can give their time and effort. That's what we need, that's why we hope our children will spend more time doing that.

Padma:  To give effectively, and to scale up, and to have an impact on what we believe in. 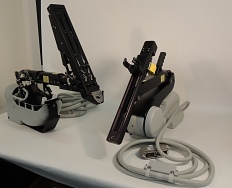 Robotic arm developed for surgery with the support of Mr. & Mrs. Vattikuti