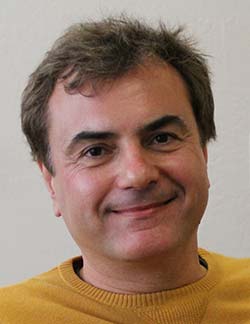 Alex Balkanski, CEO of Picarro Inc.; excerpted from an interview with the National Museum of American History, November 18, 2014

My father was born of illiterate parents in Bulgaria.  He escaped Bulgaria when the Communists took power right after the Second World War, and my mother was born in Casablanca, Morocco which was a French Protectorate.  They met in Paris in the late 50s, married in Paris, and I was born in 1960.  I went to public high school in France, stayed in France until I was 18, then left for college in the U.S, which was a rare thing to do at the time.  People in the late 70s, early 80s came to the U.S. to graduate school for a couple of years or more, but rarely came to college.  I have asked myself many times why I came to college in the U.S…It was such a watershed decision.  I have no better answer than the fact that there was a general sense of discomfort and a lack of belonging, or a lack of a good feeling about the society and the environment I was in. Once I arrived in the U.S. I felt like my entire world had changed.

[My] childhood centered around school and the pressures of performing. Maybe because my parents were immigrants, I felt they put a lot of pressure on us to perform in school.  I remember my father placing me in high school with students that were two years older than I was. I struggled being around them and I got used to being different and then one day, later being a foreigner when I came to the U.S.  I was different because I was younger, I was different because I didn’t have a French last name, I was different for so many reasons and I ended up reconciling myself with the fact that maybe I’ll be different the rest of my life.

Food is a very big part of the culture in France, and there is no doubt that some of the cooking of Morocco, some of the cooking of Bulgaria, has stayed with me and have been very important.  When we were married, I remember telling my mother that we wished to have--as our wedding dinner--couscous, the traditional Moroccan dish that I had so loved eating growing up.  My mother told me that couscous is a peasant dish that you don’t serve for the wedding of your older child.  She had different ideas about how the French “do” dinner for one’s wedding. She ended up relenting and we ate couscous…It was fantastic.

I applied to two schools, Harvard and MIT.  Both of them took me, and I remember at once people telling me that the educational system and the environment in France was plenty good enough.  Wasn’t it good enough for me?  What did I need to go to the US for?  I think a kid now would have an easier time [but] it was unusual then. I went to Harvard. I brought so little.  My mother insisted that I take two suitcases.  One of them was empty; the other one was half-full.  I didn’t have very much.  I had never lived outside home.  I had traveled a little bit, but mostly with my parents.  I didn’t have any idea what to take, what not to take, but she insisted on two suitcases. I thought, “I’ll take two suitcases; maybe I’ll sell one.”

I started going to school.  I started feeling very tired in the late afternoon. Thinking I was sick, I went to the health services.  They didn’t see anything wrong with me.  [Later] I realized that the concentration it took for me to try and follow classes in English was making me exhausted by the mid-afternoon. [Then] I had this astounding revelation that by being supported, and having teachers that wanted my success, I could do truly great things. I developed this perception that if you really want me to succeed, it’ll make an enormous difference, and I will do my very best to make you proud. I felt this amazingly, positively reinforcing environment. And then I came to Silicon Valley and worked with astounding people.  I discovered that it’s an environment where I thrive and where I am happy and fulfilled.  It’s the best thing that ever happened to me.

I thought I should really do this great American thing and start a company, but I certainly didn’t know what starting a company was all about. So I racked my brain to try to come up with an idea and I had met another fellow.  He told me if you move to the West Coast, maybe we can try to start a company. The company was called C-Cube. In the late 80s when I got out of school, video was analog. I thought “You know, it should really be digital.  Maybe we could create a company that would enable this transition. And if we did that, we could build semiconductors that did the compression and decompression of the digital video.”  My partner found the money…At the time the Japanese were eager to invest. Kubota Tractor Company gave him some money. So, we never had venture capital to start with. We had a tractor company give us money.

[C-Cube] became very successful, then had real challenges, then became successful again.  There's no one time when a company becomes a success.  It's more an all-absorbing and all-encompassing effort. We were in our most difficult position after we had gone public. I think it's a very personal, very trying experience, but I can't imagine doing anything else: doing my own show with people that care similarly. It's the great American thing to me.

After C-Cube, I joined a venture firm. I thought to get myself out of harm's way and help others be successful; [but] I don’t really much like the venture business. It's too remote from making things happen. So, today I am running one of my portfolio companies. So, I have found a blissful way to contradict every rule I set for myself, and I'm running a company again. I like it very much. It's my thing. That's what I do.

I met my wife at a rodeo--a junior rodeo they have on the Fourth of July.  My friends told me that I should come and see this, and I thought, "A French person at a rodeo?  I might get tarred and feathered, but it would be an interesting experience.” So, we met there. I don't speak French at home. My children are curious and interested about France. I tell them to ask their grandparents. I don't want to influence the children directly; on the other hand, I want to give them an environment where they can develop their interests and they can be intrigued and challenged and be curious. I like to think of the eye as being a muscle, and so, I go to museums constantly. I ask questions, and I read relentlessly, and hopefully, this will seep in and prove to be adventurous to them, but if it isn't, it's okay too. They're interested in languages. They are very comfortable traveling internationally.