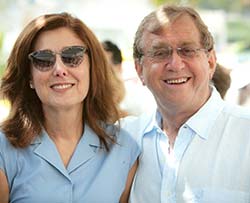 I was born in Saida, Lebanon, which is a sleepy, seaside town. Lebanon’s best desserts come from Saida, cooking and eating seemed to be the only pastime. We were a land owning family, and my father had orange groves, watermelon, fava beans, and so much more.

My father died when my sisters and I were very young. I grew up in a house with six women and with the knowledge that I was to assume the responsibility of the man of the family. My mother enrolled me in a Jesuit boarding school in Beirut, about forty miles from Saida, N.D. de Jamhour. Jamhour was a melting pot of people of diverse nationality, mentality, and background. People from the mountains, people from the cities—it was really accessible to everyone. This was made possible by having three tuition tranches: A, B & C – where the A tuition is the highest to support those who pay the lower C tuition.

Lebanon is made of minorities, the Lebanese constitution recognizes eighteen religious groups. And at the time, Beirut was at its height as a center for culture and commerce. It was very exciting.

I started Latin and had to attend to mass every day at six o'clock. I was good in Arabic, and I was reading Gibran’s The Prophet at age twelve and editing the college magazine in Arabic. I became a sports guy and spent a good portion of my days on the track. I became sprint champion of Lebanon in the 200 and the 400 meters.

Then I went to St. Joseph’s to study law and became president of the student council. I participated in a small revolution in the 70s and pushed for changes for the students. Of course, I had inherited the family land in Saida, and so I would leave university and work the land on the weekends—terracing and planting citrus and bananas. I took my first loan at the age of twenty-four to buy another piece of land, and we were making a good income.

When the war broke out, I was living in Beirut with little to do. How could I pursue law in this country under militia laws? I met my wife, Rita. She had just come back to Beirut without her family after living in London for much of her youth. When we got married, I moved to London and started working for my father-in-law, Edwin Abela, and pursued my interest in the property business. I learned the intricacies of property deals in Europe, America, and Lebanon. I had energy, I had creativity, and I had a passion to succeed.

I was investing in property in America before Rita and I moved here. And I had two really big failures early on. I learned right away that you can fail, try again, and still be successful in America. My father-in-law had friends in Harlingen Texas, ten minutes from the Mexican border. So I first went there and bought ruby-red orange groves. We paid twenty-five percent down and the balance over ten years. The first two years we did well, we made twenty-five percent return on money and bought another one hundred acres. I wanted to buy more! The third year, we had a severe frost and lost the crop. The fourth year, we had a freeze and lost the trees and had to replant.

What do they say? There are three ways to get poor, the most pleasant way is on women, the quickest way is on gambling, but the longest and most assured way is agriculture. I bought a  hotel in Atlanta that was going under—about four hundred rooms at $7 million. The hotel was right next to a stadium, I did not know that stadium arenas are not built in great central locations.  I lost money for ten years until the Olympic Games came, and I was able to sell it.

We moved to Washington in 1985. We had two children already; two more were born here. All of my children visit Lebanon with us, every year at Christmas time, but they really think like Americans. All four of them went to engineering schools at Duke, Columbia, and University of Pennsylvania.

I was determined to become a successful international entrepreneur. America gave me that opportunity. After I bought J. Paul’s in Georgetown, we built over twenty restaurants and our first creation was Paolo’s. It was the first open kitchen on the East Coast, and I really focused on making it perfect. I believe in atmosphere, lighting, and color. I believe my time in Europe helped me develop my design taste and an eye for beautiful detail. The objective for me is always to create a beautiful place in a great location—even before I know what the return will be.

When I dream here, I dream in English but when I go back to Lebanon, I dream in Arabic. Politically and economically, I feel very American. I believe in freedom and the democratic spirit of fair play, freedom of the speech and religion. I feel so lucky to live in a place where everyone has the right to succeed and to compete. I tell my friends in Lebanon who are just starting out, “Come to America! It is a land of opportunities. But don’t come to be a salary man. Come be an entrepreneur.”

After I achieved success, I knew I had to give back to my home country. The Prime Minister of Lebanon asked me to come back at a critical time. And for me: you do not come back to your country when it becomes five stars, you come back when it is two stars and you help make it five stars and so we opened twenty-six restaurants and four hotels in five years in Beirut. We planted trees in the streets and painted whole buildings white, off pink and yellow. We had only one goal: to bring life, hope, good vibes, and good food to the people of a very depressed country. I continue to find ways to improve my home country. For example, I am on the board of Children’s Cancer Center of Lebanon. We were only a few in the beginning who knew Alsac very well and helped convinced them to go to their native country (Dany Thomas and the majority of the founders were from Lebanese origin.)

More than any nation in the world, America is a nation shaped by immigration. When all these diverse people come together with their respective heritages, they make of America a wonderful kaleidoscope of representation made of a myriad of connotations and nuances, a melting pot of the world culture. But with all this said, it is still; the same nation. There is surely not one voice…it is a family of voices but with one face forming one great nation. America is what people decide they want it to be … and that is why I will stay. 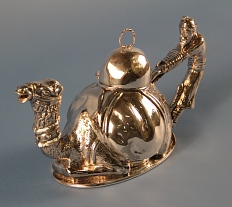 Teapot in the shape of a camel used in one of Nammour’s restaurants.

‹ George Marcus up Patrick Soon-Shiong and Michele B. Chan ›