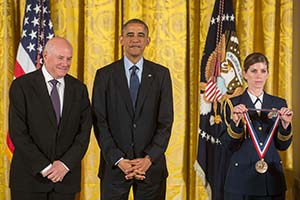 Harari receiving Medal of Technology and Innovation from President Obama 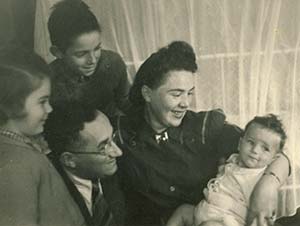 Harari with his parents, brother, and sister in Tel Aviv, 1946 (Harari is being held by his mother in the image)

Dr. Eli Harari, ‎retired founder of SanDisk; excerpted from an online interview with the National Museum of American History, May 4, 2016.

My parents, Abraham and Genia, came to Palestine as a young newlywed couple from Warsaw, Poland, in 1933, just as the Nazis took control of Germany. Fortunately they were able to bring most of the extended family to Palestine. As a young woman, my mother studied sewing at the Ort school in Warsaw and was amazingly fast with the pedal-driven Singer sewing machine. When my brother was born, she and dad started a pajama manufacturing business in their rented room, with my mother as chief (and only) seamstress and dad selling the output. After a while the business flourished, and they expanded beyond our home. By the time of my arrival, we were a middle-class family, at least by Israeli standards.

I was born in 1945 in Tel-Aviv. At that time, Palestine was a British controlled territory, but in 1948, Israel declared its independence in part of Palestine. In the war that ensued, five Arab countries attacked the new state. I was three years old when Egyptian planes bombarded Tel Aviv and my parents sent me away to a shelter outside of town until the war was won.

I have an older brother Zalman and an older sister Sara. Both are now U.S. citizens living in LA. We grew up in a warm house with loving parents who spoke Polish, Yiddish, and Hebrew. Israel was the Jewish homeland, a country of mostly Jewish refugees escaping persecution. It was a melting pot of people speaking many languages with many traditions and numerous ways to express Jewish rituals.

At age thirteen, I had my first encounter with America. I came with my parents to attend the wedding of my older brother to a Brooklyn girl. I have fond memories of that first visit; the Manhattan skyscrapers, Radio City, Times Square neon lights, Coney Island, and my first hamburger and coke. On the way back we stopped in England, and, to my surprise, my parents dropped me at Whittingehame College, an all-boys Jewish boarding school in Brighton, so that I could have the best English education. Although I initially resented their decision, in retrospect it was the best thing they did for me. It gave me an excellent education, taught me to be independent, and made me many lifetime friends from around the world.

My father passed away from cancer at age fifty-one when I was just fourteen years old. That was my first huge setback in life. When I turned eighteen, I fulfilled my draft obligation to the Israel Defense Forces, and then returned to England where I went to Manchester University for a bachelor's degree in physics.

I arrived in America in 1969 to commence my Ph.D. studies at Princeton University on a research scholarship from the U.S. Office of Naval Research. There was no way my family or I could have paid for the tuition, so I owe a lot to Princeton and the U.S. Navy. It was the height of the Cold War, and space exploration was the exciting new frontier. As with all aspiring physicists, my dream was to discover something important and win the Nobel Prize.

Princeton was an amazing little town and the graduate school was very welcoming. My brother lived in Brooklyn, and my sister was in LA. I didn’t really think of myself as an immigrant at the time. I reconnected with my Swedish girlfriend, Britt, who was studying business in Montreal. In 1972, Britt and I were married in the backyard of my sister's home in L.A. The next year, our first daughter, Michele, was born. Those two events cemented our ties to America.

We moved to California, where I accepted a position as a member of the technical staff at Hughes Microelectronics Research Center. After work, in the evenings, I pursued innovation. Somewhat to my surprise I was able to come up with one idea after another, some of them quite useful. I could not afford the high rates of patent attorneys, so I started attending evening classes at the local community college to learn about patents.

In 1988, at age forty-three, I founded SunDisk (later renamed SanDisk) in Santa Clara, at the heart of Silicon Valley, a stone’s throw from Intel’s headquarters, with a vision of a new kind of storage technology, a solid state memory that would have no moving parts and would store information for many years with no external power applied to it. This memory would be sufficiently compact to fit into my pocket so I could have my information with me anytime, anywhere. 1988 vintage cell phones were analog and brick-size; digital cameras were bulky and expensive; luggable computers weighed as much as a one-year-old child and were about as cooperative. There were no MP3 players, no World Wide Web and no apps. In that landscape, our vision sounded more like science fiction.

Ignoring the naysayers, with my co-founders Jack Yuan, an engineer immigrant from China and Sanjay Mehrotra, an engineer immigrant from India, our team set out to invent revolutionary solid state Flash memory from the ground up. Through a rapid succession of technological breakthroughs, by ferociously executing Moore’s Law over a quarter century, we shrank our Flash memory transistors to the point where today one billion bits of information—enough to store the entire Bible—are squeezed into an area the size of a grammatical period.

At home, our family has always cherished old traditions from both Israel and Sweden, and new ones we adopted from America. Our children went to Jewish schools, and we regularly celebrate the lighting of the candles to welcome the Sabbath, the eating of matzah in Passover, lighting the candles on the eight nights of Chanukah, and fasting on Yom Kippur. We also celebrate the Swedish Midsummer, Christmas Eve, Israel's Independence Day, the Fourth of July and Memorial Day.

I am seventy-one years old. I have lived in the U.S. for forty-seven of those years, which means I have lived the most recent two-thirds of my life in a country that I have loved from the first day I set foot in it. Israel, on the other hand, is my birthplace, the place where I spent my youth and the only Jewish homeland, where Jews from anywhere are welcomed with open arms. This makes Israel a very special place for me, although that is less so for my children and grandchildren, as our family is well assimilated into American society and lore.

On September 11, 2001, when the twin towers collapsed, I was at Heathrow Airport and grounded for three days. Our plane was the first flight to arrive at SFO, and standing beside the taxi runway were hundreds of U.S. employees waving and welcoming us back. It was a very special feeling of coming home. I really felt American on that day.

I have immense pride and joy of our family—our children, Michele and David, and our four grandchildren. I am proud of being inducted to the National Academy of Engineering and The Consumer Electronics Hall of Fame and being honored by President Obama at the White House with the 2012 National Medal for Technology and Innovation.

With all its flaws, America still is the land of limitless opportunity and near infinite possibilities. America must remain the beacon of light for the world, leading the monumental task ahead. Immigrants made America great. New immigrants coming to this magnificent country will continue to be its source of energy, diversity, optimism, passion, hope, and willingness to work hard and make the sacrifices needed to ensure a better America and a more sustainable earth for their children and generations to come.