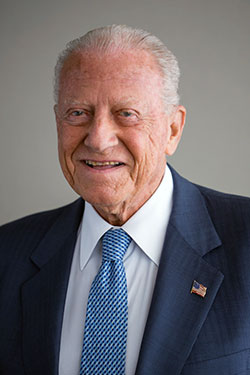 I was born in Milano, Italy, in 1930. When the war ended, I was about fifteen years old, and so

I remember the bombings in my city. My father, Antonio Cecchi, was the head engineer of the city of Milan. My mother, Carla Cecchi raised my brother, Piero, and me. In Italy you follow family traditions more so than in America. So I came from a family of engineers—my grandfather, my father, my uncle—so logically I would have to be an engineer.

We were a typical Italian family. Very close, very catholic, and rooted at home. I strongly believe that family is the pillar of the society, and I'm blessed because I have all my children here in Washington with me. Three out of the four work for me at IDI. I have eleven grandchildren and they’re all nearby. That’s part of my Italian heritage that I brought with me and cherish.

I went to the University of Milan to earn a degree in engineering and then went to work in the planning department of a real estate development company for two years before I was called to complete my military service. I returned to work at Società Generale Immobiliare, which was a huge public company, and in 1959 they decided to open branches in New York, México City, and Montreal. I had been on vacation in the English island of Jersey for two consecutive summers so I had picked up some British English. I applied to go, and they put me in the group that went to New York to scout for development opportunities.

I spent about six months in New York. When I arrived, I couldn't understand any English, and people talked very fast in New York. By chance and good fortune, I stumbled upon a way to learn the language, which was also fun since I didn’t have any friends or a social life in NYC yet. Near my apartment on 42nd Street, near Broadway, there was a line of movie theaters, one next to the other, and I would go in after work and watch double features of western movies. At the beginning, I would just see the action without understanding the dialogue, but then I would hear words repeated and pair them with the action on screen. I did that for about two months and then I had a great vocabulary, and I was able to communicate in English.

An opportunity came up for a project in Washington. I came here in June of 1960 and I’m still here. I remember as we flew into Washington and peered down from the sky, my colleagues pointed out this development site on a beautiful river a few blocks from the White House, and we thought it must be the best location in Washington. We didn’t know that Foggy Bottom was a second rate area back then. Our president came from Rome with a ten million dollar check, and the acquisition of what would become the Watergate was a big event.

We hired the number one architect in Italy, Luigi Moretti, to design this project, and I supervised. It was a pioneering experience because the Watergate was the first mix use project in the District. When we approached the Planning Commission, which we felt was a key factor to get support, they explained that there would be a national cultural center built right next to us, and it was planned to have three round buildings surrounded by curvilinear roads. So we told Luigi Moretti that our project would have to be complementary to this round construction, and that’s how he came up with the Watergate design which is also curvilinear. But later on, when they started building the cultural center, they changed the name to Kennedy Center to honor President Kennedy and hired a new architect that brought a box and columns design. So we ended up being complementary to a design that was never built. We just celebrated the fiftieth anniversary of the first Watergate building last year.

After Watergate, in 1975, I founded International Developers Inc. (IDI), and over the last forty years, I developed numerous projects throughout the Washington metropolitan area.

I got married in 1968 to Mercedes. She was the last of nine children and grew up in Uruguay in Montevideo with parents of Spanish descent. She had lived in the States for a year when I met her and was a month away from going back home. I caught her just in time. Here I was trying to improve my English, and then I had to quickly learn Spanish too so I could go to Montevideo, impress her large family, and ask for her hand!

We had our first child in 1969, and we became Americans in 1982. We had a family, we were happy here, and so we decided we should become citizens. We have four sons, four daughters-in-law, and eleven grandchildren. A family of twenty-one!

My wife and I cook mostly Italian at home. In fact, the first time I was in the paper, the Washington Star, it was an article about bachelors in Washington and they published my recipe for spaghetti con le vongole. We speak a mixture of Italian and Spanish, but I never speak English with Mercedes. My children are very proud to be fluent in Spanish and in Italian. All of them, I forced them.

I feel very American. You know, to become American by choice is much different than being born American. When born American, you may take your freedoms for granted. But to become American while also giving up our native citizenships as was required at the time, that was a big choice. We are very proud of the life we made for our family in America. 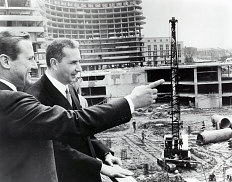 Cecchi at Watergate building site while under construction

Cecchi and his wife Mercedes on their wedding day in 1968

Cecchi during his service in the Italian Air Force 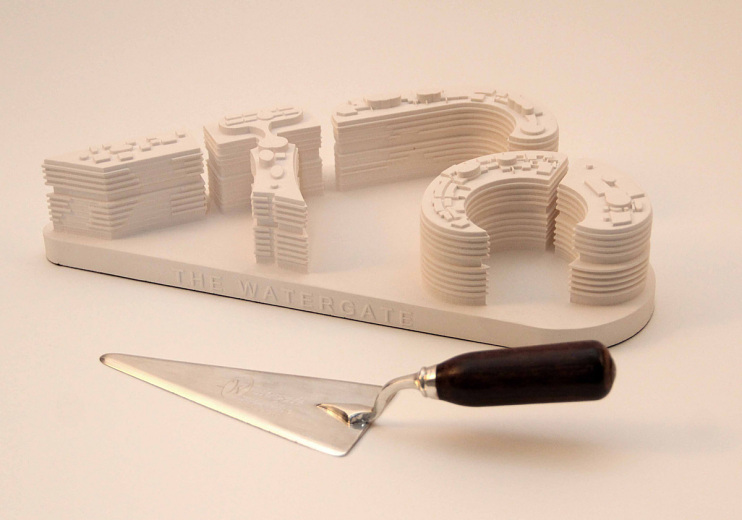 Cecchi was given this trowel during the grand opening ceremony of the Watergate’s east building in 1965 and, later, this Watergate model.