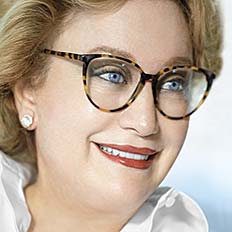 I was born in Caracas, Venezuela…a long time ago. It is not typical for a Venezuelan woman to confess her date of birth. When I arrived in the States, I was shocked that in a magazine or a newspaper I would see a number after a person’s name, and it was not a shoe size; it was their age! I think it's a way of determining your date of expiration.

My father was born in Caracas and my mother in Maracaibo on the western part of the country. My mother was born of a German father who was headed for Brazil. His ship stopped in Maracaibo, and he fell in love with my grandmother. My father was the founding general manager of the Venezuelan International Airlines, Viasa. He was very smart, a wonderful guy with a great sense of humor. He started as a mechanic and then trained as a pilot. From his example, I developed a life that has been driven by projects. Since a young age, I cannot be without a project or two or three.

I have one brother whom I loved all my life. He was my hero, even though my mother clearly preferred him, and that's something that marked me from a very young age. I said, “I'm never going to do that.” I'm feisty regarding women's rights.

As a kid, I always felt that I was destined to be great in some way, and I think that's important. I didn’t know how I would be great–maybe a trapeze artist or maybe a singer. Of course, those were professions that a middle-class girl should not contemplate, unless show business was your family’s business. My mother was a home maker, and my father was a pilot.

My parents were upper middle class and did not have excessive income, so it must have been a huge sacrifice for them to send me to a Catholic school in upstate New York in my sophomore year to learn English. Afterward, they didn’t have the money to send me to college in the States but used the excuse that they were concerned that if I went back, I would never return. And soon enough that's what happened. But first, I studied economics and worked at a public utility in Venezuela. And, after three years, I became its treasurer. I was smart and determined to be financially independent. I mention that because I think that's critical, for anyone who really wants to overcome their circumstances, to have a very clear objective in life. So as a young adult, that was my objective–to be financially independent.

My marriage to an artist was not working, and I decided I needed to break with my environment. I knew there was a lot more about economics I hadn’t learned yet, so I went to the American consulate to find out more about Harvard (I had watched Love Story), MIT, Berkeley, and Chicago. This was not the age of the Internet. Here, I met one of the angels in my life, a woman who worked for the State Department for the cultural side of the consulate. Mrs. Fisher mentored me through the process of researching these universities. She was an extraordinary woman. I wish I could find her again. I flew to New York and to Boston and visited Harvard and MIT.

MIT was dry and scientific, and Harvard was the love story. So I said, “This is the one I want to apply to.” So there I was, the first Venezuelan woman looking to study at Harvard, and I got in.

I figured if I got in, I would find a way to finance it, but there were no scholarships in Venezuela for people in the private sector. I was running out of options and hope; and then one day, I arrived to the consulate to do some paperwork, and Mrs. Fisher was there and saw me crying. She said, “Well I didn't want to tell you until it had actually happened, but I applied on your behalf for a Fulbright Fellowship. I think you're going to get it, and that would pay for your tuition and your travel.” So I came here on a Fulbright. And it brings tears to my eyes, because when I couldn’t find scholarships in my own country to go to Harvard, America paid for me to study.

I met my husband, now of almost forty years, and that cleared the path to Washington, D.C. The World Bank assigned me to a fascinating consulting project to come up with a formula that would allow the World Bank to price its loans fairly outside of political compromises with different constituent groups. Six months later, having finished my consulting assignment I looked for and found a permanent job at the bank, managing their pension fund, where I stayed for 12 years, developing a distinct process for managing assets globally that could deliver competitive returns.

So we began our family here. I have remained connected to my culture through Venezuelan cooking and of course close Venezuelan friends for all of my life. Since I was very little, I learned to make hallacas which is a sort of Venezuelan tamale made during the Christmas season, and it becomes a family enterprise. For two days a large group of family and friends gathers to cook hallacas. We still cook a typical Venezuelan meal, pabellon and arepas, once or twice a week–usually on weekends, so I can share that with friends.  There are now a couple of food trucks who sell great Venezuelan food in the Greater D.C..

I decided I wanted to be an entrepreneur and take to market the methodology we had developed for the World Bank. Make it available for other investors. It took me three years to develop a business plan, market it, and find the financing. But I got it done, and we started the Strategic Investment Group in November of 1987, right after the devastating crash. I was in a state of panic, thinking the world as I knew it might have come to an end. I've always said that I discovered, at the time, that fear is a much better motivator than frustration. Soon enough I developed positive scenarios of what could happen to let the world move forward. And forward we all moved!

I am immensely grateful that this country gave me the opportunity to become a successful entrepreneur. As a businesswoman, I am both American and Venezuelan. I have Venezuelan human values of openness and inclusiveness, Venezuelan hopes, and a Venezuelan sense of possibility. But, I'm very American in my sense of ethical values, the power of education, meritocracy, my sense of responsibility, and self- reliance. So, I am both. I have not gotten rid of my Latin American accent when I speak English. By now I like my accent.

The United States to me has always been an extraordinary place. I love this country, and that means I get mad when the country is not going in the right direction. No one gets as mad as an immigrant, I think, when they see their leaders misbehaving, because we are deeply invested in this miraculous place where everything is possible, where there is a meritocracy, where there is every opportunity for a woman or a man of any extraction to make a difference. 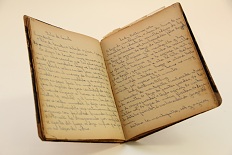 This cookbook was handwritten and passed down from Hilda’s mother. Hilda now uses it to cook for her family in the United States.

‹ Patrick Soon-Shiong and Michele B. Chan up Ann Ratner ›