Jerry: I was born in Taiwan in 1968. My father and my mother were English teachers in Taipei. My father died when I was two, so my maternal grandmother played a big part in raising us. It was a really wonderful time as a child. I remember celebrations with our extended family around the Chinese New Year. It seems like most of the globe has cultural celebrations around food, but certainly the Chinese—dumplings, noodles, etc. My grandmother would prepare fabulous feasts, and my uncles, aunts, and cousins would all be making dumplings together.

In the late ’70s during a time of uncertainty for Taiwan, my mom, my grandmother, my brother, and I left for the States where my mother’s sister was living, married to a Chinese-American. I was in the fourth grade, so it wasn't something I was consulted on, obviously; I was just told to pack up. You can imagine all the emotions: anxiety, nervousness, excitement. We left everything familiar to face a world we knew little about. I remember landing in Los Angeles, and it was the first time I saw people that were not Asian. Hispanics, Caucasians, African Americans. It was chaotic. Our aunt drove us to the suburbs near Pasadena, and I remember the blue skies—we didn't get too many blue skies in Taiwan in those days—and the California sun. And we had our family together, which was a big part of our strength.

We bought a house in San Jose about six months later, and I started fifth grade in a public school. The first couple of years I was in remedial English, but I excelled at math and science. My ability to rely on math and science as my strengths during the early years as an immigrant probably ended up helping me choose my future career path.

Akiko: My family is Japanese, and I grew up in Costa Rica. While working for a Japanese company called Toyobo, my father applied to be transferred to Costa Rica which, at the time, was actually more developed than Japan. I have two siblings, and we were very fortunate to go to a Japanese school. I would speak Japanese all day, Spanish during my after-school activities, and Japanese again at home. You can imagine in Costa Rica how difficult it must have been to get Japanese food items, especially in the ’70’s and ’80s. My mom made tofu herself, and we would receive special packages from my grandma every month. I remember opening these packages in the kitchen with all the Japanese treats inside. It was like Christmas every month.

I transferred to an American high school in Costa Rica, so it was quite natural that I came to the States for college. I applied and got accepted to Cornell University. You can imagine what a shock it is to go from a country like Costa Rica to New York. It was a rough transition, so I was thrilled when Stanford accepted me for my sophomore year.

I feel like Stanford played a major role in shaping who I am because of its very distinct ethos. They have nurtured a very positive ecosystem that fosters energy to change the world.

Jerry: Choosing Stanford was one of the biggest decisions that shaped my life. I was able to pursue a master’s degree while simultaneously finishing my undergrad coursework. I graduated in 1990 as an electrical engineer but couldn't find a job I was excited about. So I applied to the Ph.D. program, and I still don't know how I passed the qualifying exam.

During my Ph.D. days, I was part of a research group with some very talented people, including David Filo. David and I went to Kyoto one spring quarter in 1992, and I met Akiko while she was doing research in Kyoto University’s economics department and taking some time to get to know her roots. She had graduated the same class at Stanford, but we never met. And to think, my last name is Yang and she’s Yamazaki, both from San Jose, and we were on the same page of the yearbook.

We started dating in 1993, when she came back to California. This was in the early days of David and I starting Yahoo! She had become a successful management consultant and was in a suit every day, making the money.

Akiko: You know, I have to be very honest that I never thought it would become what it did. It was really two grad students—David and Jerry—in their shorts, not having slept for God knows how many hours, just tinkering around. That's what it felt like to me.

It was a very busy time, and we always joked it was like raising a kid, probably worse. We felt like we had a tiger by the tail and we were being dragged around everywhere.

Akiko: We got married in 1997. My mother was born in Taiwan and came to Japan when she was eight, but it wasn’t something my family talked about much. When we were going to get married, she gave me very true advice: “You know, just because you look very similar, being Asians, that can actually be very deceptive. We are very, very different cultures, and so you may have big differences, and you just have to know that.”

We couldn’t be living in a better place than California to be able to manifest all of our identities. I speak Spanish every day with people that work with me. My sister's family and my mother now live nearby, so I text them in Japanese. Our kids’ classmates are from every background. I don't think I'm just Japanese. I’m not just Costa Rican. I have these prominent roots, but I am American. Being American is acceptance of every kind. You come here with your history and heritage, but you become American.

Jerry: There is a lot of me that identifies with Chinese culture, but I feel my value system, both the way I view ethics and the way I do business, is uniquely American. The idea that I can be an immigrant from a middle-class family, start a business, and have the kind of opportunities that we've had—there's no place else in the world. America is a very accepting and embracing place. Here, we negotiate about the merit of the idea. That's the system that allows us to keep moving forward.

Akiko: I am an equestrian because my mother was an equestrian, and our children are also growing up as equestrians. Our team for the Beijing Olympics couldn't have been more

American. It only happens in America where the rider is a German-born American citizen [and] the horse is from Holland. I am the owner, a Costa Rican of Japanese decent and a naturalized American. The groom and vet were Mexican Americans, the farrier was French American, and the physiotherapist was an all-American boy from a gold mining town near Sacramento.

Jerry:  This is the America we have come to expect. Of the entrepreneurs I now invest in, we have French, Chinese, Indian, Israeli, African-American; we have men, we have women.

We are in this generation where our parents and our grandparents went to war, and so we're right on the edge of having direct exposure to their stories and their journeys. You know, nothing is ever handed to you, you have to earn everything. Even to this day, we are not that far away from that part of our history, and it’s been a core driving force behind our entrepreneurial spirit but also this notion that you can't get too far ahead of yourself. Really, it keeps you grounded, keeps you humble.

Akiko: I am most proud of being able to provide a full life for our families. Each generation has been able to live fuller, richer, more experienced lives.

Jerry: I am most proud of the fact that we both chose to help give back to our community. Being able to give back to education at Stanford was really fulfilling. 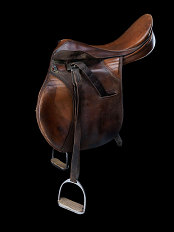 Akiko used this personal show jumping saddle as a young equestrian in Costa Rica and brought it with her to the United States. She and her daughters are competitive equestrians and they own some of the nation’s most decorated dressage horses. 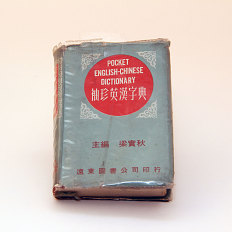 This English-Chinese pocket dictionary was a gift to Jerry from his uncle. Jerry used the dictionary to help him learn English after moving to the United States. 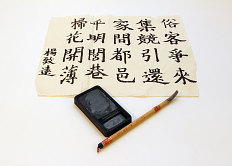 Jerry’s practice calligraphy writings made during the late 1980s along with the brush and inkstone set he brought with him to the United States from Taiwan.

‹ Dennis Wu up Family of Voices ›