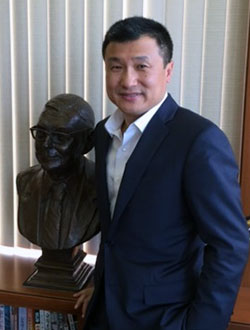 I was born April 1966 in China at the dawn of the Cultural Revolution which is probably the darkest moment in modern Chinese history. My parents and my grandparents were imprisoned or sent into labor camps merely for being intellectuals, and I spent most of my childhood rotating between foster families. I didn’t have much intimate connection with my biological family. I'm a survivor. I tried to identify with any family that took me in and learned to fit into whatever environment I found myself. I lost my then adopted family in 1976 from a devastating earthquake in my home town that killed 240,000 people and wounded much of the rest, the worst earthquake in recorded history. That was also the year when the Cultural Revolution ended, so my biological parents were freed, and I was reunited with them.

Growing up, I had wonderful teachers. I also learned from my own grandmother who was one of China's first women educators. She was the principal of the best primary school in her province, and she was among the first to take young girls into modern education. She was also persecuted for many years during Mao’s era but survived. In many regards, she was my hero. I started university in China in 1985 at Nanjing University studying physics. It was really the best physics department in the country, and I stayed there for nearly four years.

My generation was quite unique. We grew up during the Cultural Revolution, and then as we came of age, we experienced Deng Xiaoping’s “open door” policy. For the first time since 1949, China opened its doors to the rest of the world. We began to see a whole different world, so it was an era of great hope and idealism.

The students became very active in pursuing reform. In 1989, a series of different events transpired together, later known as the Tiananmen student protest, and I was fortunate to play one of the leading roles in that movement.

There were 300 or 400 different cities involved in the demonstration to varying degrees, and there was a general hope that things could change for the better, and it is everybody's responsibility to do something about the future of our country.

On June 4, 1989, the Chinese government ordered the army to open fire on the students and citizens. It was known as the June Fourth Massacre, and the government put a number of the students and intellectuals on the most-wanted list. I was one of those people, and so my picture began to appear on television and all over the streets. It was almost impossible to stay there.

I moved into hiding, and there were a lot of courageous people who really took it upon themselves to rescue us. It was through that underground railroad that I escaped through the South China Sea to Hong Kong, and from there to France, and from France eventually made my way to New York City at the age of 23.

I went to New York because my grandfather had studied at Columbia and got a Ph.D. At first, I enrolled in the American Language Program at Columbia to learn English. Over the summer, I studied from eight o'clock in the morning to eight o'clock at night in a very intensive program to learn English. In the fall, Columbia put me into the School of General Studies. At the time, I had studied for about three and a half years in China, but I could not get any transcripts. There was no proof that I had actually studied. So I had to do things all over again.

I got a scholarship, and then in the second semester I was transferred to Columbia College. A year and a half later, I was told that there was a joint program between the college and the law school, so I applied for it and got in. A year later, I heard there was a joint program between the law school and business school. I applied and I got in. I ended up joining all three schools—college, law school, and business school—over a six-year period. When I graduated, I was probably the first one in the history of the University who graduated with three degrees simultaneously. I don't think it would have been possible anywhere else. America is really quite unique in that regard.

One of the classes I took involved reading the great classics that helped to shape Western civilization. The idea is that all those great classics contain our original ideas that continue to shape the way we think today. That really helped me understand America and contemporary Western society. I no longer felt alien to the culture.

We also had a class called the extended core, which examined, in the same way, the great classics in the form of the Confucian tradition as well as the Islamic tradition. I also found a great deal of kinship with the intellectual ideas and ideals of the culture that I came from. I began to see the two cultural traditions live in peace with each other inside myself. In my forties I came to an epiphany that I am both 100 percent Chinese and 100 percent American.

I now feel that one plus one equals eleven, and that's what really makes America powerful, and as long as this country continues to have the ability to attract people from different cultures it will be wonderful.

When I was a student at Columbia, I was very poor and I looked at all the bills and all the debt, and I wondered how I was ever going to be able to pay it back. I asked my friends how to make money. One day, they handed me a flyer and told me, “If you really want to learn how to make money, you have to go to this event.” I took the flyer, and it said there would be a lecture with a buffet. So I thought, at the worst, I’d get a free lunch. I went and there was no buffet; it was this guy named Buffett.

Warren Buffett opened my mind, and over the following year I tried to find out everything about him and read everything he wrote. A year later, I bought my first stock, and I continued as an amateur investor throughout my Columbia days. By the time I got out of school, I was looking at my balance sheet and realized, I didn’t have to work for anybody, I can just do this, and so I became self-employed.

About six to seven years into my career as an investment manager, I was introduced to Mr. Charles Munger by a mutual friend. Charlie Munger has been Buffett’s partner for more than fifty years. We talked for five or six hours, and at the end of the conversation, Charlie mentioned casually that under certain circumstances he might become an investor in my fund.

A few months later, he became my largest investor, and the rest is history. He lived in Los Angeles, and he urged me to come to California, so that's why I moved here. I don't think that leading businessmen of any other country would trust their money with immigrants from a different country. Your ability, your energy, your integrity, and nothing else—that is uniquely American. That's what makes America so successful in terms of business; everybody has an equal opportunity.

I've been blessed and extremely lucky. Halfway along the way, I figured this is too easy; we've got to do something harder. So instead of making money by buying and holding securities, we decided we should probably start businesses. I started a venture capital business, and we funded a dozen or so different companies from the ground up. Half of them failed right away, but the other half turned out to be very successful.

My wife is Chinese and grew up in China like me. Our children speak both Chinese and English. We celebrate traditions from both cultures, which is good because we have double the celebrations. The holiday that I love the most is Thanksgiving because it is the day that no matter who you are, where you come from, whatever the religion or non-religion, whatever the culture and race and different beliefs, we can all celebrate and feel grateful.

I take pride in the fact that I've traveled a long way. I couldn't make it by myself. You've got to cross a lot of bridges, cover a lot of roads, to get here. The people I met throughout my life, those people are my bridges, my roads. I certainly did not take myself along without their help. The only thing I did was simply take the journey.  Each step of the way you have to constantly improve yourself, constantly learn new things, and that's really what makes life fascinating to me. 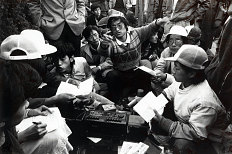 Lu at the Tiananmen student protest in 1989 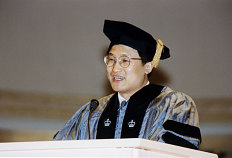 This statue known as the Goddess of Democracy recognizes Lu’s contributions to the democracy movement worldwide.