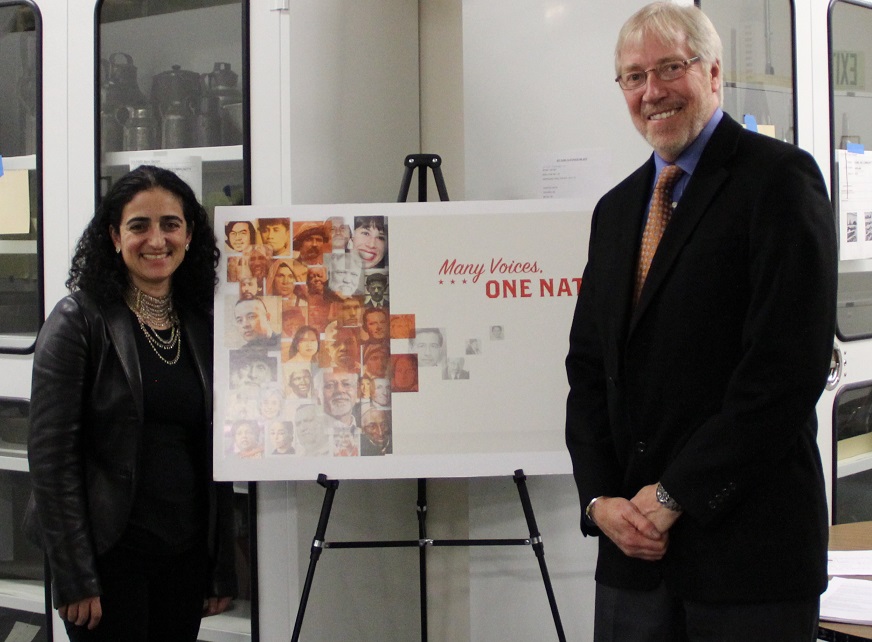 We came to the States two separate times. When I was born my parents were quite young. My mom got a scholarship to attend Northeastern University. My dad came a year later, and then they sent for me. I actually attended preschool in Boston while they finished their graduate courses. Then we packed up and moved back to Iran in the early 1970s. My parents were quite Western, I suppose. In 1979 when the Revolution happened, we ended up leaving the country quite suddenly. I went to an American school, and over the course of that year, as the revolution sort of took speed, more and more of the students and the teachers would leave. But we stayed. We stayed until the Shah had left, and then there was an interim government that was put in place that was supposed to be more of an attempt at democracy. After Khomeini arrived in Teheran, Dad got wind that he was going to get blacklisted. We went to the airport like we were going on vacation. We went to Paris, and we actually did go on vacation to Majorca. When it was clear that the revolution wasn't going to be a fleeting thing, we went back to Paris [for a year]. Because my parents' second language was English, we decided to move to the States. We were fortunate my parents had had green cards because they had lived in the US in their 20s, so we were able to get papers quite easily to move to the States.

When we moved to California we moved to a suburb of San Francisco's called Lafayette. I ended up showing up for seventh grade in this very lily white affluent suburb. We were very adaptive kids, or as a family we were quite adaptive. My parents looked Western, and my sister and I didn't speak with an accent, which made a big difference. I showed up the first day of school. Everybody's in Izods and Calvin Klein jeans. I showed up in a pink T-shirt, poofy pink skirt and lace up ballet shoes because I was coming from Paris. I spoke more French than the French teacher. I went to the math class, and I knew more math because math was more advanced in Europe and Iran than it was in the States. By the end of the day, they decided I needed to skip seventh grade all together. I was sort of the odd kid in the odd outfit who spoke French and who was brainy because she skipped seventh grade. That immediately made me stand out pretty significantly in that population.

It's funny, I didn't really get pinned for being Iranian, per se, and it was not far after the hostage crisis. In that year that we lived in Paris my parents didn't have anything to do with themselves except wait. That's anxiety-provoking, so my mom and a friend took a baking class at Le Cordon Bleu. So when we moved to Lafayette they decided to open up a French bakery. We opened up the first French bakery—Le Croissant—in Lafayette. Because of that, even though people knew I was Iranian, they just considered me French. We Americanized our names. Maryam became Mary and I think my mom, whose name is Gity, was called Kathy. We were like chameleons. You dropped us anywhere, we sort of studied the terrain. I don't think it's coincidental that I'm in marketing. I basically would read the room and see what was going on and try and analyze what was going on and figure it out. You quickly learned, "Okay, I need Calvin Klein jeans and Izods in order to fit in." You were never going to fit in totally, but that got you closer. You read customs and behaviors and patterns and how people were with new kids and whatnot. In junior high, I joined every club that there was. It didn't even occur to me not to join or to think of myself as other. I mean I just didn't see myself that way. I joined every single after-school club including bowling, and I was the worst bowler. Or softball—I couldn't even hit the ball, but I joined. I signed up and I went. I went to everything. It's funny then in high school I actually did become a cheerleader.  I remember my father came to a game ONLY once and he said to me, "Why would you cheer other people on? Why be a cheerleader, go be a football player." My senior year, I had two cheerleading outfits. One of them said Mary and the other one actually said Maryam. So already by senior year I had come more into being confident or more into myself.

Then I ended up coming to New York for college. It turned out to have been a really great thing for me. Being in New York and at Barnard College was like being a kid in a candy store. There is no one way to be in New York. The miracle of New York was that you could be anybody you wanted to be, because there were thousands of different kinds of people in New York. The place I have lived the longest is New York. I have been in New York since 1985. I spent a summer in London. I lived in Paris during college. I moved to Buenos Aires after college. And I have lived in San Francisco. I have lived in a lot of places, but really the place I've lived the longest, and I think the place where I came into my own, was New York. If I had to pick, I would consider myself American. There was a while I wasn't so sure I would consider myself American. Probably when I was in college and I thought about joining the Peace Corps. But I think the thing that makes America so unique and different, and in many ways wonderful, is the incredible freedom. In the States there is an incredible sense of meritocracy.  There's an incredible amount of freedom of speech.  There is mobility.

I think I come from a line of very strong women. But honestly I think Iranian women in general are quite strong. I think with my career, I never saw myself as a woman or a man or an Iranian. I sort of just put my head down and did the work and pushed through. I spoke up. I think sometimes when people are immigrants, or they're new in a setting, they don't think they can speak up. I think I was never afraid to speak my mind. I was fortunate that way. For better or worse, I always spoke up.

My daughter switched schools for high school, and she would talk about how a lot of people thought she was African-American. Now remember, I'm married to a nice Jewish boy from Cincinnati! She would come home and be like, "Why do people think I'm black?" It's not something she actually took offense to, it was more she was confused by the whole thing, because it would happen to her multiple times. We would joke about it – because it was so like our society to want to categorize and label people. Soon after that, I remember reading my journals from when I spent a summer in the UK, and it's so weird. And I found my writings from a trip I had taken to Henley to see the boat races. On that trip some British boys had apparently called me Whitney Houston! When I go to Mexico, people speak to me in Spanish because they think I'm local.

[My daughter] is never afraid of her opinion, and never afraid of standing out in some strange way. Same with my son. I was always trying to fit in. So it's interesting that I gave my children a life where they could totally fit in, and yet they are choosing not to fit in. 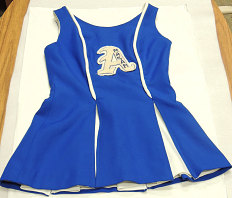 Maryam’s cheerleading uniform with her given name, which she was comfortable wearing by her senior year. 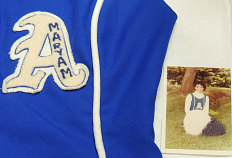 Detail with photo of Maryam in her uniform