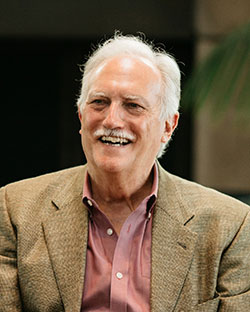 My name is Miguel Bezos, although most people call me Mike. I was born and grew up in Santiago de Cuba, Cuba, in a family of five: my parents, my brother, and sister. I have great memories of my childhood. Our house was always full of cousins who would come to the city from the smaller towns they lived in to go to school and attend university. At any point in time, there would always be a couple of cousins living with us. It was a very busy household but full of life.

My dad was a businessman. He didn’t have a formal education but he had a tremendous business mind. He owned a lumber mill where he would purchase timber from other places and cut it in different sizes and sell it for construction. My mother was mostly a stay at home mother, but she also had her own store where she sold baby clothes and fabric.

For many years before Castro’s rise to power, there had been a lot of activity in Cuba by activists to try to get rid of Batista. Long before Fidel came into the picture, there were a lot of shootings and acts of violence against the local government.

On July 26, 1953, Fidel and a group of followers came into Santiago and attacked the military base close to our house. The coup failed and Fidel was incarcerated. There was a lot of shooting going on, and government security in the city was very strong. A few years later, Castro was released from jail. He went to Mexico where he formed a group of combatants that came back to Cuba and started the revolution that everybody now remembers. On January 1, 1959, Batista left Cuba, and the guerrillas were able to come into the cities and formed a new government.

The first sign that Castro had extreme ideas for the country was the elections kept being put off until the decision was made that they weren’t going to happen at all, and we were going to be a Marxist Leninist government. Then, Castro nationalized foreign industries and afterwards, Cuban businesses. My dad’s little business was taken over. I was in the office with him when the army came in with the papers that said they would be taking over the business.

At about the same time, schools were being closed, and reopened under a new curriculum to reflect a socialist, communist story. My family decided to pull me out of school. I started going to work with my dad until his business was nationalized. That was the genesis of the idea of getting me out of Cuba. My parents became aware of U.S. visas that were being given almost freely. Everybody was copying them and, with that in hand, my parents and I applied for a passport. The time between when I applied and I was given permission to leave was about a year.

I had no desire to leave Cuba and had never thought of coming to the United States, but my parents really wanted me out because my future was very questionable if I stayed in Cuba. They did not anticipate this being a forever decision. They thought it was a temporary decision for a few months or years, and then I’d be able to come back and be reunited. Of course, it didn't happen.

My parents knew from other families that with this visa there would be someone on the other side that would “take care of us.” There was somebody out there that would feed us and give us shelter. That was the extent of the information we had.

I remember getting a telegram that said, “Your departure time is on the 21st of July.” I think we had just a day and a half to get from Santiago to Havana where the departure was. My parents were not allowed to stay at the airport, they just dropped me off, and I walked into the airport with my little suitcase.

I boarded the airplane and landed in Miami. Upon arriving, I was taken aside and joined a group of kids that had also arrived by themselves, and we were put in vans and taken to one of several camp locations. I ended up going to Camp Matecumbe, which I believe at that time was one of the largest camps in terms of size.

There were about 400 kids at Camp Matecumbe. The purpose of the camps was to hold kids, feed them, and shelter them, until their relatives came from Cuba and they could be reunited. In the meantime, they would try to find a place for the kids with host families, foster homes or orphanages so we could continue our education. Later we were known as the Peter Pan kids.

My cousin Angel (who came out of Cuba one day after I did) and I were sent to Wilmington, Delaware, where we attended high school. There were eighteen of us, Cuban boys between the ages of fifteen and seventeen attending high school, and we lived in a house run by Catholic Charities. There was a priest in charge of us, and it was a tremendous experience for me. I'm sure you’ve heard sad stories about what terrible experiences some of the Peter Pan kids had, but for us in Wilmington, we had each other, and we became very close. To this day, a lot of us still talk to each other and visit once in a while. We also visit with the priest that was in charge of us. In the middle of all the chaos, it was a wonderful experience.

There wasn't a lot of real anti-refugee, anti-immigration feelings at the time, but obviously you always encounter some negative feelings. One of my friends was the only Cuban on the high school football team, and he made a lot of American friends. He was our insider and taught us a lot about the American way of life.

My cousin and I, we were extremely fortunate in that we went into the high school as seniors. We graduated from high school when we were seventeen, and were out of the program. We went to Washington, D.C., where a cousin of my cousin and her husband lived. They were also very young, and the four of us shared a one-bedroom apartment.

Some of the jobs that we ended up having were not what we expected so, ultimately, we decided, “Let’s go to school. Let's go to college.”

I looked for colleges and universities that gave scholarships to Cuban refugees, and I ended up being accepted to the University of Albuquerque in New Mexico. I wanted to go into mechanical engineering. I was taking a lot of math and physics courses and a few engineering courses. After being there for four years, I found out that I could finish my mechanical engineering, but it would take another year. However I could graduate in math and computer science right away. By this time, I had gotten married, and had adopted my wife’s son, Jeff. So I said, “I'm a mathematician,” because I needed to get a job.

I graduated at the end of the fall semester of 1968 and went to my interview with Exxon. They offered me a job in Houston, Texas. Soon we had two other kids to complete the family and we began our nomadic life. We moved from place to place with Exxon.

I'm a Cuban first, but I always feel very proud to be American at the same time. At home, the language was English, and it wasn't until later when the kids were growing up that we brought Spanish back, because whenever we got together with my Cuban family, it was all Spanish. Jackie, my wife, who speaks perfect Spanish, learned Spanish because she wanted to know what my mother was saying about her and she found out that my mother loved her.

My wife makes some amazing Cuban food, and my kids love Cuban food. You know, celebrating, getting our family together for Christmas, is big for us. I have never lost that Cuban identity and I never will, but at the same time I learned what Thanksgiving was all about.

I’d like immigrants to know that things are going to be different and that you have to adapt to new things, but you don't have to lose your identity. Things are not going to be like back home. On the other side, for those that are receiving new neighbors, the best thing that you can do is to help them assimilate. There is always that need to compromise on both sides.

I'm most proud of all my family. It is truly amazing. The three kids that we have, all married amazing people, and we have been given the gift of having eleven grandkids. I look back on my birth family and I'm extremely proud of my history, my heritage. Extremely proud of what they accomplished.

Bezos with his sister and brother in Cuba 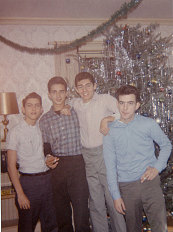 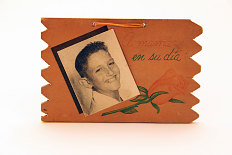 Mother’s Day plaque Bezos made for his mother. Spanish inscription reads “To mother on her day.” 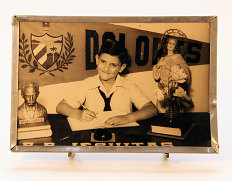 School photograph taken in 1953 during a celebration for the 100th birthday of José Martí, a Cuban patriot during the war of independence from Spain in the late 1800’s.