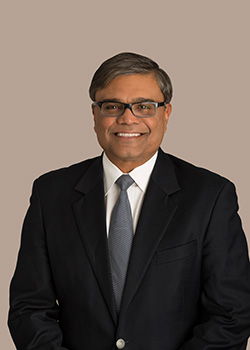 In 1898, my grandfather left India to go to Africa at the age of sixteen. His family was very poor, they didn’t have enough food to feed everybody, and during those times, Africa was the land of opportunity. He got a job and worked for an entrepreneur, and eventually he became a successful businessman. He and my grandmother had a large family. The eldest son passed away in his thirties, and my father lost his father at the age of eighteen, so he became the head of the household with his mother and his sisters.

I was born in Kampala, Uganda and grew up in an Indian community in a family of Ismailis, the followers of the Aga Khan, the spiritual and the secular leader. The community was very much closed even though there were other Indians around us—Hindus, Christians, and Sikhs. We stayed within our community.

At that time, we were a British colony, and when I went to school, my teachers were British and we spoke English. When I came home I spoke an Indian language called Gujarati, and with the African people we spoke Swahili. So we spoke three languages. Most of the African people in Uganda spoke English as well. They chose English as the national language because it unified the country.

Our food was Indian, but it would have items that are more African mixed in. One of the dishes that we ate a lot was cassava, which is an African dish, but we ate that mixed with Indian spices.

I went to Great Britain to study hotel management. Around that time, we really started noticing the Ugandan president, Idi Amin, making statements about Indians. He didn’t like that Indians didn’t intermarry with Africans and that they were successful. He gave us ninety days to leave the country. It was a shock to me because I thought I was a Ugandan. I just happened to be different from the African Ugandans.

I realized that the money my father was sending me to go to school was going to stop, and I didn’t know how I was going to make it. The first thing I did was try to look for a job. I came from a privileged background, so this was the first time I had to look for a job at the age of eighteen. Suddenly, I had to worry about money. I’d never experienced adversity like that, and that was a sort of blessing, because it made me focus on my studies. Eventually, I found a job at a CBS warehouse, packing LPs in boxes and shipping them out.

After Idi Amin expelled our family and because we were Ugandan citizens, no country would take us and our citizenship was revoked. Our family came as refugees to Canada, and in 1973, I joined my father and mother and my sister in Toronto and went to hotel school there at George Brown College.

Two years later, in 1975, I graduated and got married to my first wife, Julia, who was born in Hong Kong and is Chinese. I did something that was unthinkable at that time; I married somebody who was out of the culture, out of the religion. I loved cultures, I love different people. My ex-wife, she spoke Cantonese with her mom and dad and her sisters and brothers, and they spoke English too. It was another culture and new cuisine to learn. It was exciting for me.

I began my career working for Westin Hotels in Toronto, which was a great company. I was with them for twenty-three years. I started at the bottom, and the day I started, I made a goal that in ten years I was going to be a general manager. At year ten, I was the number two of a hotel, an executive assistant manager. So at year ten, I thought I was a failure, but I made general manager at year eleven.

Westin approached me to go to Kansas City in 1991. It was one of my dreams to move to the United States. I wanted to progress with Westin, and proving yourself in America was very important to move up the ladder. While working for that hotel, I became a permanent resident, and I got my MBA at Rockhurst University. The MBA really helped me learn about business and leadership in America.

I was then promoted to be an area managing director in Toronto. I went back from 1994 to 1998. Then I left Westin, and I joined a start up company in Vancouver from 1998 to 2003. In 2003, I got the opportunity to join Host. I had kept my permanent resident card and paid my taxes every year to the U.S. government, because my intention was always to move back to the United States. I've been here ever since.

When I married my ex-wife, religion and faith were never part of our focus. Eventually, we realized that there was something missing in our lives, so we started searching and learning about other faiths. I started studying the Bible with Jehovah’s Witnesses. We did that for a few years, but I had an issue with some of their teachings, because they don't believe in success. I couldn't accept that, so I said, “Thank you very much, but this is not for us.” My ex-wife and I then went to a Baptist church, and our family became Christians there. Fast-forward to today, we've been to so many churches, and I find that organized religion is like a business. Today, I’ve become a spiritual person, but I’m not religious anymore. I believe in loving people, but I don't think there's an exclusive way to God.

My children only speak English. We never taught them Chinese or Gujarati. We always spoke with them in English. If you look at my children, it's very interesting. They are all Christians, but at their weddings they included some Indian traditions, Ismaili traditions and Chinese traditions. They did all these things at their weddings to respect all the different parts of their cultural heritage.

My current wife, Shelmina, is an Ismaili from Tanzania, and she moved to America in the 1980s. I met her at a mutual friend's fiftieth birthday party in Houston. She and I were sitting together and discussing leadership and philosophy, and we had a lot in common. We've been married now for four years.

I consider myself an American with a global mindset. I'm lucky to have lived in Great Britain, Uganda, Canada, and the United States, so I have a worldly perspective. I consider myself very blessed that I have had the privilege to live in America, because this is truly the greatest country on Earth. To be American, there is a responsibility to your fellow Americans to be a good citizen, to abide by the law of the land, and to really have a heart for people. We want people to think of Americans as good, smart, honorable people. I love the fact that we're all immigrants in this country.

If you're a new immigrant, have a goal of what you want to achieve. It may not be a perfect plan, but have a plan so that you always know where you're going. I'd say America is one country where you can start from the bottom and become all that you can be. 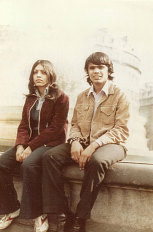 Minaz Abji with his sister, Nazmina 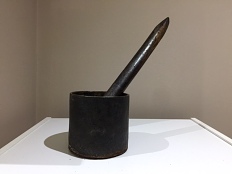 Mortar and pestle purchased by the Abji family in Uganda in the 1950s and used to prepare Indian spices. It was eventually brought to the United States and used here. 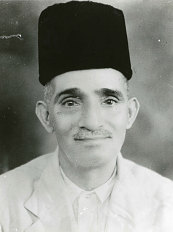