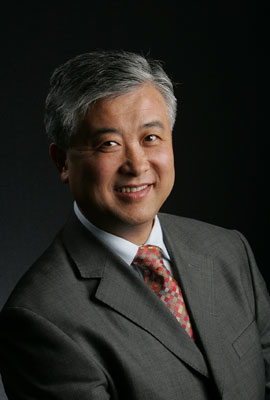 My name is Ming Hsieh. Hsieh repeated twice in Chinese means “thank you”, and Ming means “bright” or “clear” and often refers to the future. My father's name is Baoyan and his English name is Paul Hsieh. My mother's name is Ying Mo and her English name is Sunny. She is very upbeat and provides a continuous ray of light.

I was born in 1956 in Shenyang, China, in the northeastern province of Liaoning. Both of my parents were well educated, and we lived an intellectual, upper-middle class life. My father was a senior research scientist. For fun, we would take apart radios to examine their circuitry. My mother was a respected high school teacher.

I remember as a child, before the Chinese New Year, photographers always coming to our home to take a special family photo. Later on, I understood this to be Chinese media propaganda. They would send our family photos to my grandparents in Taiwan to show them how happy we were, trying to persuade them to return to China.

My father studied electrical engineering, and, after the war, he left Taiwan and came back to northern China eager to rebuild the Chinese power transmission network. In 1970, a few years after the start of the Cultural Revolution, we lost all of our privileges as good students, citizens, and neighbors. We were classified as suspicious or agents working for the Taiwan national government. We were forced to leave Shenyang. The government sent us to a small village in the countryside near Panjin for “re-education.”

I had lived a comfortable life in the city. Now, I could not go to school. We had no electricity, and life depended on the sun’s hours. My father proposed we work together to bring electricity to the village. He was able to locate some cables, insulators, and old transformers. My father and I constructed a crude power system that brought electricity to everyone. We even installed lights in all the ramshackle homes.

I was my father’s only employee. Since we could now see at night, my father began writing his textbook to educate me about electronics. When we had lived in the city, he had tried to teach me many times how to repair a radio he built, but I never had the interest. Now, I was focused. Soon I could repair a radio much faster than my father! My serious education in electrical engineering really began in Shenyang, amid great deprivation and suffering.

After the Cultural Revolution, I studied semiconductor physics at South China University of Technology for two years. It was a good fundamental physics education, but the technology was so far behind, especially compared to the West.

My uncle, P.Y. Hsieh, had started at the University of Southern California, earned his master’s degree in electrical engineering in 1952, and went on to have a successful career at TRW. I wanted to follow in his footsteps. I watched how hard he worked and how he built his own success and wealth. He was my role model.

My uncle introduced me to the world of American colleges and helped me apply as a transfer student. It was a very smooth process getting approval; I am the generation that benefited from the dialogue President Nixon started with China.

When I left China, parts of the country were rationing food. But when I came to the United States, food was everywhere. In China, there were no supermarkets and freeways, and only a limited number of cars. Everybody rode a bicycle. But in the United States I saw the freeways, the cars, and the supermarkets. Then I came to USC when I was twenty-four and saw this beautiful campus. And computers. I had never seen a computer before. I had no idea how powerful they could be.

I started at USC’s engineering school in January 1981. There were only four other Chinese students on campus at the time. We studied very hard. On the weekends, we would make Chinese food and talk about our studies and our future careers. We also watched USC football and the Lakers on TV. We were big fans.

I really never thought about owning my own company, because I grew up in China. There were no private businesses. But at USC, whenever my classmates and I worked on a project, we would ask ourselves whether it had any commercial value.

After I got my master’s degree, I decided to go to work instead of getting a Ph.D., like my mother wished. I worked as a design engineer at a semiconductor company to support my young family. In 1987, I started my first company, AMAX Information Technologies. It was a computer server and storage system company, and it was successful.

But I wanted to do something where we could build a product from scratch and own the rights. So I started Cogent. We developed fingerprint identification technology.

Within six months, we landed our first major contract with the Department of Health and Human Services to restore the integrity of our welfare system. It was a major success. We had revolutionized the fingerprint identification field for civil identification use.

We then competed against three other industrial giants for the FBI code competition but lost the contract based on our size; we were a three-person company. In the FBI briefing, we were told our technology was excellent but asked what would happen if one of us got hit by a truck.

The United States is the only country where you can compete equally, fairly. If you really have the best technology, you have a pretty clear separation. From the very beginning, we were different than our competitors. They were all using dedicated hardware and provider technology. We promoted an open system, our software solution, and tried using our innovative projects for image processing within.

In 1994, we started building our own acceleration hardware called Programmable Machine Accelerator (PMA). Through that architecture, we were able to use one machine to complete 200 servers, and that's why we were able to sell at a price lower than our competitors’. We really started to grow.

We built databases for the Department of Homeland Security to help secure our borders and fight against the terrorists. We helped law enforcement agencies solve crimes; the D.C. sniper and twenty hijackers were identified from our system. We helped the government locate more information about the 9/11 hijacking plot.

It makes me very, very proud because we built something that created value and benefited our country. Cogent became one of the world’s premier providers of automated fingerprint identification systems for law enforcement, government agencies, and commercial applications. “Business Week” ranked us no. 1 in its “Best Small Companies.” 3M acquired Cogent in 2010.

I was very happy with Cogent’s success, but I’m always moving forward. A year after I sold the company, I founded Fulgent Therapeutics. Fulgent is based on research around genetic solutions to help us find a new path to fighting types of cancer. I want to solve this problem.

My wife, Eva, has developed a very successful brand in the women’s fashion business, and we have two children. I am proud that my children were raised in America with so much freedom and opportunity.

My family celebrates Christmas and Thanksgiving. On Chinese New Year, we buy Chinese decorations and food, and drink Chinese hot liquor. We talk about our families; we talk about traditions. I am rooted in China, and that is why part of my current work and philanthropy is about trying to build the bridges—more dialogue, cultural exchanges, and understanding between our two countries.

USC opened my eyes and doors for me to know America and then build my American dream here. I give back to USC to improve a system from which I benefited. The university changed my life.

America is built by immigrants, and we all follow the same route. You come here with a dream, and once you reach your dream the issue is how to help the next generation fulfill their dream.

We cannot say America is perfect, but I think America still is the best place for opportunity, equality, and safety. 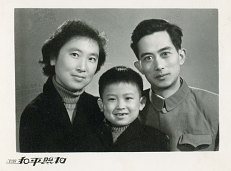 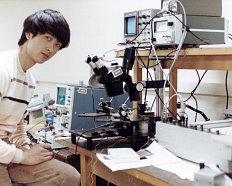 Hsieh working in a lab as a USC Engineering School student 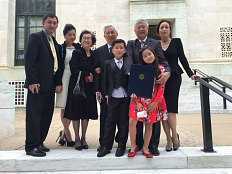 Hsieh was elected to the National Academy of Engineering, one of the highest professional honors accorded an engineer, in 2015. His family joined him to accept the award. 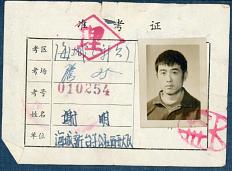 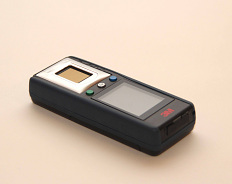