Patrick Soon-Shiong and Michele B. Chan

Soon-Shiong: Michele and I both come from Hakka families. The original Hakka in China believed in total community collaboration, and the warrior is the woman, and she is as strong as the man.

My parents came to South Africa after the Japanese invasion of China, and they were simple shopkeepers. My father was an herbalist in China, so in South Africa he was also a Hakka Association doctor, and every two months a metal biscuit can would arrive from China filled with foul smelling weeds. If anybody had a fever, a cough, or a boil, there would be a knock on the door, they'd walk into the house, and he would concoct something. I'd sit there and watch that whole activity. I think my father’s work drove a lot of what I'm doing today because it started influencing my belief that you have in your human body the ability to protect yourself from disease. You were given the innate capability to heal yourself.

I was born in a small town on the ocean called Port Elizabeth, and Michele was born in an even smaller town called East London. Looking back, my childhood felt normal, but it was a strange normal because we were not black, and we definitely were not white. We could get on the bus, but we couldn’t sit in the regular compartments with everyone else. I grew up with black friends, white friends, Chinese friends, Indian friends.

I met Michele my second year of medical school at a basketball game. To this day, basketball is the thing that keeps me sane. It's the only activity where I really truly relax.

Chan: My mom and dad were both born in South Africa. My grandfather was, as family legend has it, the black sheep of the family, and he was not expected to live. There were too many kids already, so they put my grandfather literally out in the pigsty to die. A servant brought him back, because he said, "He's not as weak as you think; he's living." My grandfather never felt appreciated, so he left home at the age of fourteen and lived in India and Southeast Asia, and then made his way to Cape Town. He didn't come in a wave of immigration, he was literally a straggler.

My grandfather became quite successful in his small town and opened three businesses. My parents inherited one of his businesses. We were raised Catholic, but the Catholic schools did not allow Chinese students. When it came time for my older brother to go to high school, my dad drove to Port Elizabeth to have a meeting with the archbishop and held his feet to the fire and said, "I'm raising my children Catholic, but you are denying a Catholic education for my children." The archbishop said, “Because it's against the law.” My dad said, “Whose law takes precedent? God's law? To whom do you answer?” My brother was the first Chinese student to receive a Catholic education. It was hard-fought, and so we don't take education for granted.

I attended drama school at the University of the Witwatersrand. The university had to apply to the interior minister for my permission to study. My parents were incredibly supportive, which is very unusual for conservative Chinese parents. At the time, Patrick and I were going through very similar things, which created this very unusual bond. He was the first Chinese intern to actually work in a white hospital. I was the first Chinese student in a drama school. It's given us an appreciation for how hard you have to fight for what you want, and it has made us a family of risk-takers.

Soon-Shiong: I was sixteen when I went to medical school and was in the top four out of 200 in my class, and still my first working experience in South Africa as a Chinese doctor required permission from the South African government and paid me only fifty percent of the salary of my peers.

We married in 1977 and went to Vancouver for my junior residency. I got accelerated right into UC Davis as a chief resident and then became the youngest professor of surgery at UCLA. A big transition for me was the business of medicine in this country. It is one of the biggest changes that I still haven't figured out.

Chan: LA had the same climate that we had grown up in, and we felt so completely comfortable.  California is incredibly accepting of everybody. It was probably the happiest time of our lives because we were just starting out and had nothing to lose. We had no car and an old TV that was handed down to us that we had to keep slapping on the side to work. It was perfect.

I remember we didn't understand Halloween that first year. I went to the bank to cash a check and the teller was dressed up like a witch but acting normal, and I thought, “Everyone’s gone mad!”

Disney hired me in 1984 on a show called Danger Bay. I worked on Danger Bay for about five years, then Hotel and MacGyver. I really loved the work. When we had children, I stopped working and was a stay-at-home mom until my youngest, who's twenty-one soon, went to college. Then, I went back to work, and I started Green Screen Studio in Culver City, and I became more involved in designing the NantWorks campus and the Innovation Center.

Soon-Shiong: In America, anything is possible if you work hard and you set your mind to it. That's what we did. I did the first two whole open pancreas transplants and kidney transplants at UCLA. I was thirty years old. Then I realized it's the most dangerous procedure. I went to my chairman and said, "You have to shut down the program for which I'm the director so I can do islet cell transplants." He said, “What's that?” I said, “Well, I think I can extract these cells and make the islet cells and wrap them in a membrane. And can you give me a sabbatical?” He says, “You don't get a sabbatical. You just got here.” Then I said, “What if you give me six months without salary, and I go travel the world to learn how to do this?” I went to Michele, and she was making much more money than I was, and she said, “Go do that.” I came back after six months, and I did the first islet cell transplant at St. Vincent's Medical Center.

There is a universal molecule called albumin that drives all cancer cells, so I decided if I could make a nanoparticle of albumin, I could trick the cancer to feed, not starve. So I invented that, and then went to the National Cancer Institute and said, “Here you have got to develop this.” They said, “Who are you?” I explained that I'm a surgeon doing diabetes and whole pancreas transplants; I’m a NASA scientist, and I think I have a treatment for all cancers. I have this letter to this day which said, “We tested this, it's fantastic, but please go away. We can't manufacture this.”

I began to see the incongruity of how we've been trained. That by giving maximum tolerant doses of chemotherapy, wiping out the immune system, you're wiping out exactly what you've been God-given to protect your body. I decided after I launched Abraxane to sell everything and to go, so to speak, underground to prove to myself and to the world this hypothesis. If in so doing we will truly change not only cancer, but things like MS and diabetes and rheumatoid arthritis and infectious disease, because it's all the same continuum of the same biology, which means we need to really interrogate the human body down to the peptide and protein level.

The first thing we needed to do was to build an infrastructure. I took over a printing press building in Culver City in 2005. Now, NantWorks has thirty acres between here and El Segundo. The pen and the quill in the NantWorks logo represents a perspective of the world the way da Vinci may have seen it. Now I always say, “Imagine if da Vinci had a supercomputer in his hand as opposed to that quill.”

I'm proud that we've been able to do this crazy work and retain our marriage and create strong family values. I'm proud of the fact that I see people that have been with me on this journey for twenty-five years.

In Chinese tradition, what we are doing is for the next generation. I tell my children, “Find your passion, be persistent, and pursue your dreams. Be patient, allow yourself to grow and flourish.”

We were able to fulfill our dreams here in a way that we never could have anywhere else. It was a lot of hard work, but it would not have been possible if America wasn’t the open and giving society it is. I hope we stay that way. 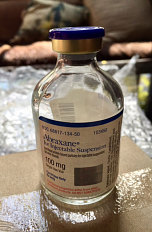