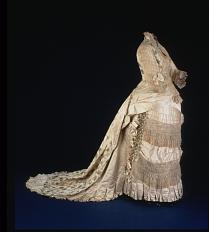 Gold damask and cream satin gown worn in 1880 to the White House New Year’s reception and later to the February reception for diplomats and members of Congress. It was made by Mrs. M. A. Connelly, a New York dressmaker.

Lucy Hayes had a distinct and unfaltering personal style.While following current fashion, she favored modest clothing that covered her throat and arms. She received both praise and criticism for her restrained wardrobe.