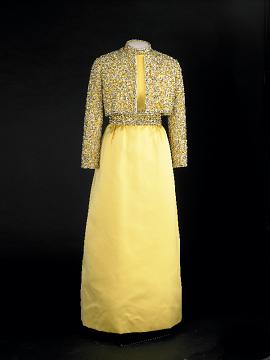 Mimosa silk satin gown embroidered in gold and silver and encrusted with Austrian crystals. The designer was Karen Stark for Harvey Berin. Pat Nixon carried a purse by Morris Moskowitz and wore shoes made by Herbert Levine.

Pat Nixon considered many ideas for “first lady projects,” but encouraging volunteerism became her primary focus. At home she expanded public access to the White House and added more than 500 pieces of antique furniture to its collections. Abroad, her skill at personal diplomacy resulted in visits to eighty-two countries, both with the president and on her own as his personal representative.