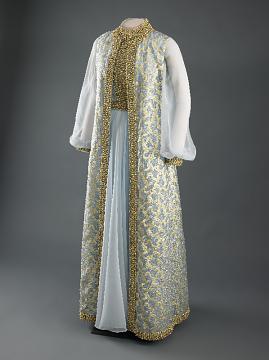 Rosalynn Carter had previously worn this gold-embroidered sleeveless coat over a gold-trimmed blue chiffon gown to the 1971 ball celebrating her husband’s inauguration as governor of Georgia. The dress was designed by Mary Matise for Jimmae. For the 1977 inaugural balls Mrs. Carter carried a purse by After Five.

Rosalynn Carter planned to be a social advocate and established a Projects and Community Liaison staff to work on social policy issues. A top priority was the President’s Commission on Mental Health, where she was the honorary but very active chair. Always her husband’s partner, Mrs. Carter traveled as his representative for talks with Latin American leaders, provided support during the 1978 Camp David peace talks, and actively campaigned in the 1980 election.