As the Eisenhowers prepared to enter the White House, newspaper and magazine stories discussed Mamie Eisenhower’s clothes, her bangs, her happy family, and her open and friendly style. The stories assured Americans that the new first lady’s years of experience as a military wife, including entertaining dignitaries as the wife of the NATO Supreme Allied Commander Europe, made her uniquely qualified to run the White House and serve as the president’s hostess. Housekeeping and entertaining would be Mrs. Eisenhower’s main occupations, they reported, and she hoped to “make White House entertaining, and the White House itself, less stiff and formal….”

“Mamie Eisenhower is fondly expected to touch off a social renaissance and to lend a new warmth to the affairs of the presidency.”
—Time magazine, January 19, 1953 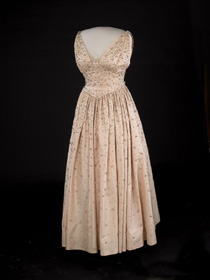 Mamie Eisenhower wore a pink peau de soie gown embroidered with more than 2,000 rhinestones to the 1953 inaugural balls. The dress was designed by Nettie Rosenstein.  Despite urgings to release details of the dress, Mrs. Eisenhower waited until the week before inauguration to reveal descriptions of her sparkling pink gown, along with formal photographs, for the newspapers. 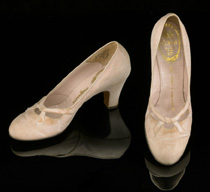 Gift of Mrs. Dwight D. Eisenhower
Mamie Eisenhower wore gloves that matched her gown, and rhinestone-and-pearl earrings, necklace, and bracelet by Trifari. She carried a purse beaded by Judith Leiber (then an employee of Nettie Rosenstein). Her shoes by Delman had her name printed on the left instep. 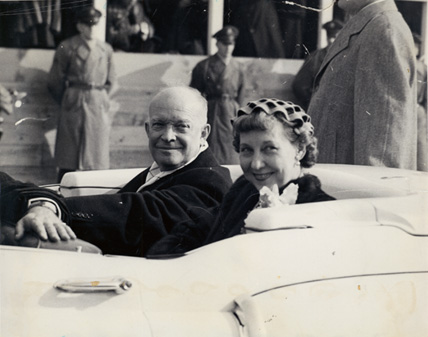 Mamie Eisenhower in her inaugural gown, 1953 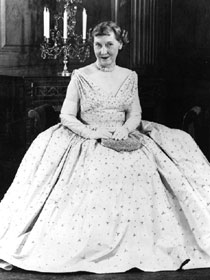 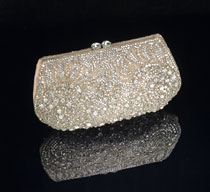