Nancy Reagan: A Change of Style

Style—in fashion, entertaining, decorating, and influence—was the subject of articles leading up to the 1981 inauguration. The press reported on Nancy Reagan’s wardrobe, film career, skills as a hostess, and plans to redecorate the White House family quarters. As lavish white-tie inaugural celebrations were planned, articles speculated on a subsequent transformation to a more glamorous “Hollywood” White House. “Everybody has his own way of doing things,” Nancy Reagan summed it up in interviews. She downplayed stories about her influence over her husband, indicating that she would not play a policy role in the new administration. Instead, she planned to become involved in antidrug causes and continue her work with the foster grandparents program.

She has flair and style, and she won’t be like any other First Lady.”
—Reagan friend Bonita Wrather, New York Times, November 9, 1980 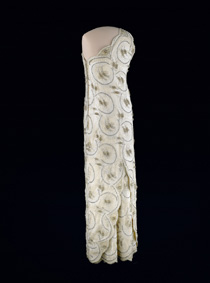 Nancy Reagan wore this white beaded one-shouldered sheath gown of lace over silk satin to the 1981 inaugural balls. It was designed by James Galanos, who also designed the one-shouldered white gown Mrs. Reagan wore to her husband’s first gubernatorial inaugural ball. In interviews, Galanos said that he wanted to make Mrs. Reagan look glamorous, “... elegant and in keeping with the new formality.” 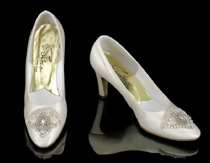 For the inaugural balls, Nancy Reagan wore white gloves by James Galanos and beaded shoes by David Evins. She carried a purse designed by Judith Leiber. 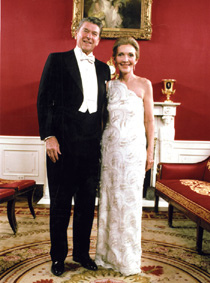 Nancy and Ronald Reagan posing before the inaugural balls, 1981 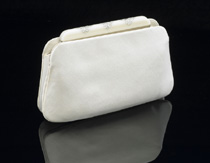