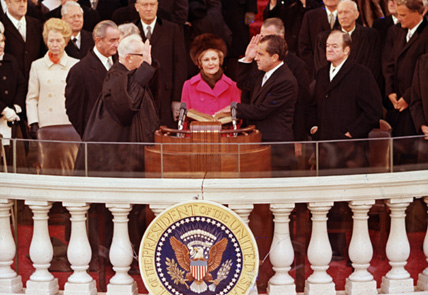 In the weeks before the 1969 inauguration, press coverage of Pat Nixon often had the tone of catching up with an old friend. She had become a familiar public figure in the 1950s when her husband, Richard Nixon, served as Dwight Eisenhower’s vice president. Some articles noted her smart new designer clothes. Others reported speculation, later confirmed by Mrs. Nixon, that the former teacher’s projects would be education, along with job training and community self-help programs. Reporters remarked on her connection and appeal to middle-class America. They concluded that Pat Nixon, with her years of “on-the-job training,” would make the executive mansion a friendly and welcoming place for both foreign dignitaries and average American visitors.

“But the next First Lady will see to it that every visitor, whether it’s the littlest Girl Scout or the most regal potentate, is made to feel welcome.”
—Los Angeles Times, November 11, 1968 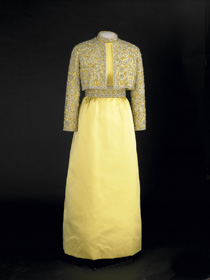 Pat Nixon wore this mimosa silk satin gown to the 1969 inaugural balls. Designed by Karen Stark for Harvey Berin, it was embroidered in gold and silver and encrusted with Austrian crystals. At the ball held at the Smithsonian Institution, President Nixon announced, “I like all of Pat’s dresses, particularly this one tonight, and, … when she gets finished with it, you’ll get it at the Smithsonian.” 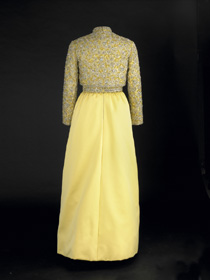 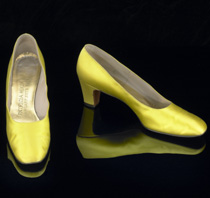 Pat Nixon’s inaugural shoes were made by Herbert Levine and were inscribed with her name and the date on the right instep. She carried a purse by Morris Moskowitz. 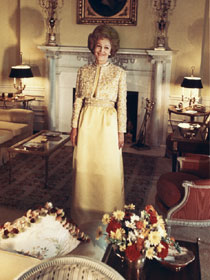 Pat Nixon in her inaugural gown, 1969 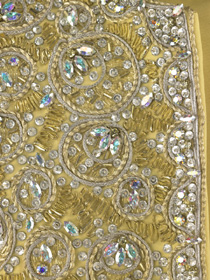 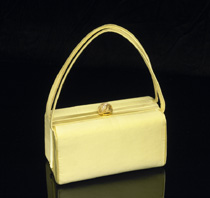