The Tradition of the Gowns (page 2 of 3)

The Tradition of the Gowns (page 2 of 3) 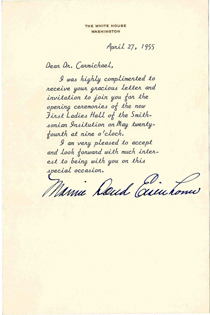 In the 1920s it became customary to add the first lady’s gown to the exhibition after she had left the White House. The public’s desire to see Mamie Eisenhower’s inaugural dress prompted the Smithsonian to reconsider that policy. When Mrs. Eisenhower formally opened the new First Ladies Hall in 1955, her famous pink ball gown was prominently displayed. 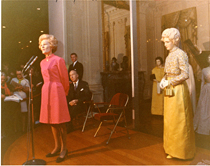 A formal gown presentation gives the Smithsonian the chance to thank the first lady publicly for her donation and, most important, is an opportunity for her to see her gown on display for the first time. Pat Nixon fondly recalled the inaugural ball held at the Museum and thought that her gown looked beautiful on its mannequin. 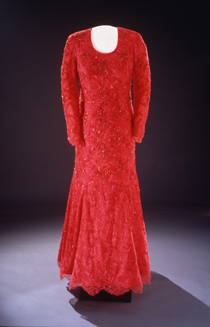 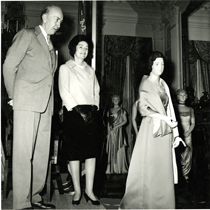 In 1964, Lady Bird Johnson started a tradition when she came to the Smithsonian’s new Museum of History and Technology (now the National Museum of American History) to present a gown to the collection in a formal ceremony. Originally, she was represented by the evening gown she wore at a White House state dinner for British prime minister Harold Wilson. Mrs. Johnson later donated her 1965 inaugural ball gown to the collection.

Gown presentations are media events that guarantee positive publicity for both the Smithsonian and the White House. They are also private events that can include receptions and special tours for the first lady and invited guests. In 1978, Rosalynn Carter opened a portion of the activities to the public when she presented her gown on the Mall terrace of the Smithsonian’s Museum of History and Technology (now the National Museum of American History). 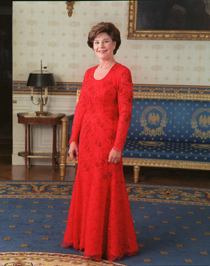