A Passion for Food

Julia Child experienced foreign and unfamiliar cuisines for the first time during World War II. Working for the OSS (Office of Strategic Services, the forerunner of the CIA), she traveled to Ceylon (Sri Lanka) and China. With her colleagues, including her future husband, Paul Cushing Child, Julia went out to eat in China as often as she could. She discovered that Paul’s interest in food was becoming an interest of hers as well.

After the war, in 1946, Julia and Paul married. Paul’s work took them to Paris in 1948, and Julia found, “As soon as we got over there and I tasted that food I just couldn’t get over it.”

In Paris, Paul suggested she go to the elite Cordon Bleu cooking school. Because of her war service, she was eligible for U.S. government–funded training. Along with several American GIs, she entered the professional course. The training she received there, with its emphasis on precise, hands-on technical knowledge and demonstrations by chefs, convinced her that she had found her life’s work. 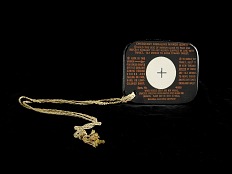 Julia kept this signaling mirror in her kitchen junk drawer as a reminder of her wartime service in the OSS. The mirror could be used to send messages in dangerous circumstances by reflecting sunlight. 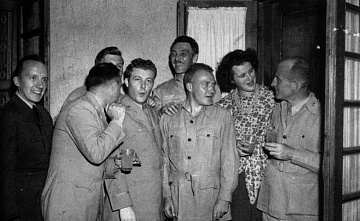 Julia in China with her OSS colleagues, including Paul Child, far right 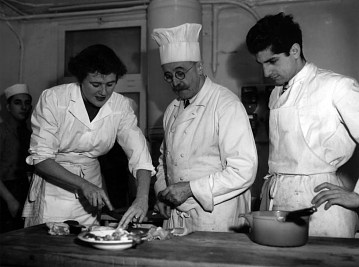 Julia Child with master chef Max Bugnard at the Cordon Bleu cooking school in Paris, around 1950 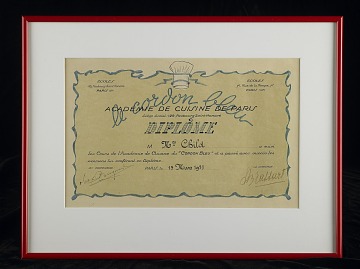 (reproduction, to protect original from overexposure to light)

Julia Child completed her course at the Cordon Bleu in 1950, but the head of the school, Élisabeth Brassart, delayed the exam, standing in the way of Julia receiving her diploma. After letters and testimonies from chef Max Bugnard, Brassart relented. Finally, a year later, Julia received this signed diploma. 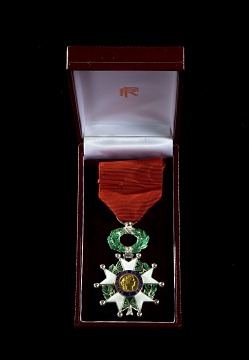 Julia Child was awarded the Légion d’honneur, France’s highest honor, for introducing Americans to French cuisine and cookery through her books and television shows.

Gift of the Cousins and McWilliams families