In the 1950s, public television programming consisted mainly of lectures, book discussions, science demonstrations, and classical music performances. Julia Child marched into this rarefied atmosphere in 1962 for a book review show on Boston’s WGBH-TV with her new book, Mastering the Art of French Cooking. She also brought her husband Paul and a copper bowl, balloon whisk, apron, and eggs. The enthusiastic response to her demonstration of how to make an omelette launched WGBH’s hit series, The French Chef.

During its ten-year run, The French Chef made Julia one of the best-known and most endearing figures in American popular culture. Her expert yet easygoing approach to cooking—along with the rueful good humor with which she quickly rescued herself from occasional slipups and inevitable kitchen errors—was unlike anything Americans had ever seen on television. Fans responded to her message: cooking is not a chore, but “an immense pleasure and a true creative outlet.”

In the 1980s, Julia hosted a series of new television programs that reflected the wider tastes and trends of the times. For her last three television series, produced between 1994 and 1999, when she was in her eighties she welcomed guest chefs into her home kitchen, showcasing many of the chefs who credit her for inspiring their passion for food and cooking.

Like all good teachers, Julia Child used a variety of methods on her television show to grab and hold her students’ attention. High drama and low comedy, sight gags, and the artful use of props—from tickling a live lobster to marking out cuts of meat on her own body—combined to make her cooking lessons memorable as well as fun to watch. 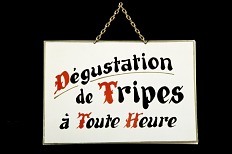 On her first shows, Julia hung signs advertising the plats du jour (daily specials), some of them offering things—like tripe—that she knew her American audience would find funny and strange. See additional signs. 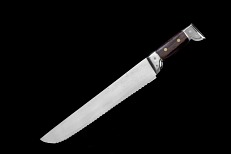 Julia delighted in oversized or exotic tools and ridiculous gear, wielding this enormous knife when introducing her audience to an episode on cooking monkfish. 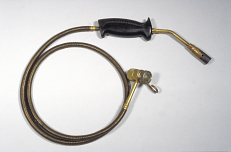 When Julia used this blowtorch to caramelize crème brûlée, women everywhere smiled as she quipped: “Every woman needs a blowtorch.”

When Julia Child introduced French cuisine and cooking techniques to Americans in the 1960s, she also introduced the European habit of drinking wine with meals.  She encouraged her readers and television viewers to see wine as a normal and natural complement to the table—in her words, as “part of the food chain.” 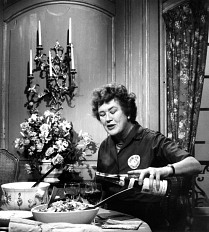 Julia Child pouring a glass of wine at the end of an episode of The French Chef, 1965

‹ A New Kind of Cookbook up Behind the Scenes ›