During the 1960s and 1970s, as cultural and political change swept through American society, food became a tool of resistance, consciousness-raising, and self-expression. Activists for many causes rejected mass-marketed, mass-produced food as symbols of the establishment. Young people, mostly white and middle class, made religious pilgrimages and volunteered for Peace Corps tours abroad. They sampled communal life at music festivals and peace marches and went on to create food co-ops, vegetarian and “natural food” restaurants, coffee bars, organic farms, and communes.

By debating the politics of food, grassroots movements vocalized concerns about diet, hunger, health, and the environment. They raised questions about food safety, justice, production, preparation, and consumption, and advocated new models of food production and new diets.

One example of countercultural food attitudes in action took place during the Woodstock Music & Art Fair in 1969. Photographer Lisa Law and Hugh Romney (aka Wavy Gravy) of the Hog Farm commune organized volunteers to feed granola, brown rice, and vegetables to thousands of hungry people stranded by rain, mud, and closed roads at the festival. News reports about the free kitchen at Woodstock raised the possibilities for alternative systems of food production and distribution operating outside of mainstream society. 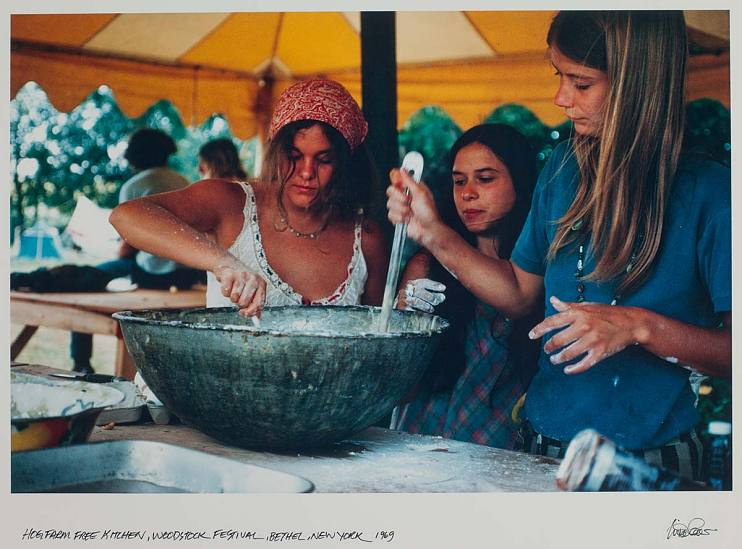 Preparing food in the free kitchen at Woodstock, 1969

In a large bowl, combine oats, nuts, coconut and brown sugar. Mix well.  In a separate bowl, combine maple syrup, oil and salt. Add this to the oat mixture and stir well until thoroughly blended. Pour onto two cookie sheets. Bake for about 75 minutes (stir every 20 minutes for an even color). Remove from oven and place in a large bowl and mix raisins in.

I was making this back in ’69 and still making it now. I used to pack it up and it went along to Big Sur with all of us. We had it for breakfast, as a snack in trails, dry or with soy milk. I hope you enjoy it as much as I have over the years. Now my niece makes it and she adds dried cranberries to hers, and my married nephew taught his wife how to make it for their daily bread. He adds cinnamon to his. It’s wonderful as an ice cream topper too. Peace, Donna.

‹ Frozen Margaritas! up Collective and Communal ›