You know Kermit, Bert and Ernie, Cookie Monster, and the rest of the Sesame Street gang. But you might be surprised to learn their backstories, their missions, and the inspiration for each of them.

Did you know that Kermit is considered Jim Henson’s alter ego?

Kermit made his debut in 1955 on Jim Henson’s first television program, Sam and Friends, which aired on Washington, D.C.’s NBC station WRC-TV until 1961. The original version of Kermit was made from an old spring coat belonging to Henson’s mother and a pair of Henson’s blue jeans.

Kermit appeared again in a brief promotional film for Sesame Street in 1969, followed by appearances on Sesame Street and starring roles in other Jim Henson productions.

He was originally performed by Jim Henson. Through Kermit, children learn about self-acceptance as they see the frog struggling with his green color but accepting himself in the end.

When the original Grover was created in 1967, he didn’t have a name, he was green, and his nose was orange. Grover first appeared on The Ed Sullivan Show, then joined the cast of Sesame Street, where his name was announced during the first season. During season two, Grover appeared with his now-familiar blue color and a pink nose. (Guess it wasn’t easy being green?) Grover was originally performed by Frank Oz, who was inspired by some of his dog’s mannerisms in portraying this monster. That’s why you can see Grover tilting his head sometimes.

Sesame Street’s writers wanted Grover’s character to represent the psychological age of a four-year-old. Grover likes to help, and he tries his hardest. He is loyal and loves to talk without using contractions in his words, saying things like, "I am Grover, I am your waiter, and I am here to serve you. What can I get you?”

Jim Henson and Jon Stone—a Sesame Street writer and producer—used to frequent a restaurant, Oscar’s Salt of the Sea. The owner, Oscar, was very rude, which is how Oscar got his name!

Oscar was originally purple in Jim Henson’s drawings for the character. He was then briefly orange, until 1970 when he became his signature green. Caroll Spinney, who originally performed Oscar, was inspired by a taxi driver to create his voice. Oscar teaches values such as tolerance, inclusion, and kindness. Eric Jacobson is currently performing this puppet.

The first appearance of these two puppets was in the first test episode of Sesame Street in 1969, where they taught the audience the number two. Bert is serious, while Ernie is more cheerful and innocent. Through their disagreements, they represent the importance of cooperation; they remain best friends despite their different personalities.

Big Bird is a six-year-old preschooler and has been since he was created in 1969. This role was originally offered to Frank Oz, who also plays Bert, but he did not feel comfortable in the costume, and Caroll Spinney took the role. Big Bird helps children understand basic reasoning skills and the importance of friendship.

Big Bird’s best friend, Snuffy, may look like a woolly mammoth, but he’s a Snuffleupagus. When Snuffy was first introduced, all the adults in the show thought that Snuffy was Big Bird’s imaginary friend. He didn’t appear when adults were around and seemed fantastical.

However, in the 1980s, the showrunners were concerned with accounts of unreported child abuse and worried that by portraying adults who didn’t believe their six-year-old protagonist, they were discouraging real children from speaking up. So Sesame Street finally revealed Snuffy was real. “At last! Joy! Joy! I told you there was a Snuffleupagus and at last you’ve seen him, and you’ve got to believe it," Big Bird exclaims. The adults apologize to our feathered friend and proclaim, “From now on, we’ll believe you whenever you tell us something.” The point is driven home, and Snuffy quips, “Maybe we should get that in writing.”

Cookie Monster was first created in 1966 for an unaired commercial in which hungry monsters devoured different types of General Foods snacks. However, Cookie Monster was repurposed on Sesame Street in 1969 and given a new favorite food—cookies! Originally performed by Frank Oz, Cookie Monster is able to feed himself because his hands are simply gloves over the performer’s hands. All the cookies that he eats go through a hole in his mouth leading to the puppeteer’s sleeve.

Gabriela Sama was a curatorial intern in the museum’s Division of the Culture and the Arts.

Please Note: Your favorite Muppet may not be on display when you visit. We rotate them frequently to provide the best care for them.

The Museum cares for the Henson collection with generous support from the Jane Henson Foundation. 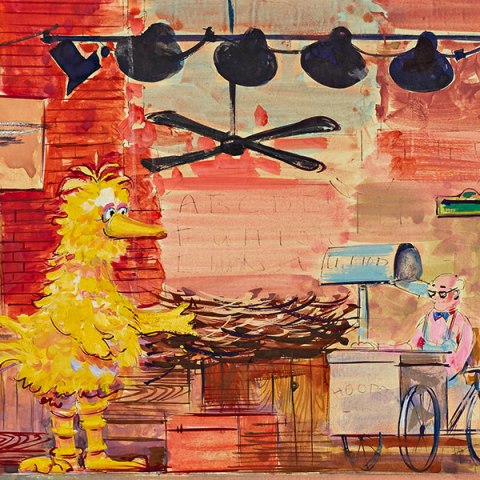 Can you tell me how to get to Sesame Street?
Sesame Street was an innovative and radical children's television program when it premiered in 1969. In the 1960s, many parents were...