Making a Modern Museum: Part One

Construction of the National Museum of American History began in the late 1950's
In the first of this two-part series, Hal Aber, manager of public spaces design and planning at the National Museum of American History, describes the architectural history of the Museum's 43-year-old building. When Aber began working at the Museum in 1991, he could tell that the interior of the building had undergone some interesting changes over the years. Because of his background in architecture and visual arts, the Museum's interior piqued his curiosity and inspired him to try to unravel what had transpired inside the building over the years.

Understanding the Museum's current building means going back to the beginning–before there was a National Museum of American History, known originally as the Museum of History and Technology. The Smithsonian Institution first acquired its role as a National Museum in 1858, with galleries in the distinct medieval revival style building known as "the Castle." For the next 50 years, this museum collected materials representing science, technology, and history. However, the collections had outgrown the original building's space by the 1870s. In 1881 The Smithsonian built the first museum dedicated to the display of collections—now known as the Arts and Industries building—next door to the Castle. And like the Castle, the new building quickly amassed a larger collection than it could handle. A third building, the National Museum of Natural History, opened in 1911 with the hope that it would alleviate the problems of space since it left only the history and technology collections at Arts and Industries.

In the 1930s the idea of an Engineering and Technology Museum was discussed, but it did not have a chance to be seriously considered as World War II drew closer. Following World War II, however, interest in the creation of a history museum grew rapidly. Many Americans who had been stationed in Europe saw the great museums there and both patriotism and pride made them want one at home in America. Aber explains that there was a belief that the advent of new technology had helped to win the war. All of these sentiments were conducive for garnering support to build a new museum on the National Mall.

The Museum of History and Technology, now known as the National Museum of American History, was many years in the making, and finally received the funding necessary to move forward in 1955. This was in part due to a pamphlet founding director Frank Taylor and other curators and exhibition specialists had published highlighting the perceived limitations of the Arts and Industries building and justifying the need for a new museum as well as considerable lobbying of the Smithsonian regents and other members of Congress. 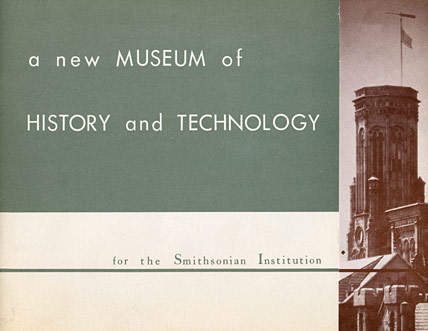 Pamphlet proposing the Museum of History and Technology, now known as the National Museum of American History
A key step to creating the new museum was to determine the style of the building. There were many classically designed buildings, particularly federal buildings, in the United States in the 1950s. The International Style of architecture began to gain popularity following World War II, when there was a great need for new construction across Europe. Architect Walker Cain, of McKim, Mead and White, focused on using international modernism with classical references for the design for the Museum of History and Technology. The blend of styles, Aber notes, can be seen in the marriage of classical and modern aesthetics: a symmetrical façade, cornice, and alternating recessed planes of marble façade that resemble a classical colonnade. The modern feel was created by abstracting the classical elements. This included using sheer marble planes and unornamented surfaces, the use of right angles and designing the building with a rectangular footprint. Clad in Tennessee pink limestone veneer, the same material used for the 1941 National Gallery of Art, just a few blocks away, the building was meant to evoke a similar classical elegance. The Kennedy Center, which opened in 1971, also has a similar feel.

Two icons were implemented in the center core design of the Museum of History and Technology to highlight its two subjects: history and technology. Aber notes that the Museum was intended to be a "better home" for the Star-Spangled Banner, which had previously been displayed at the Arts and Industries building in a glass case that was too small to show the entire flag. 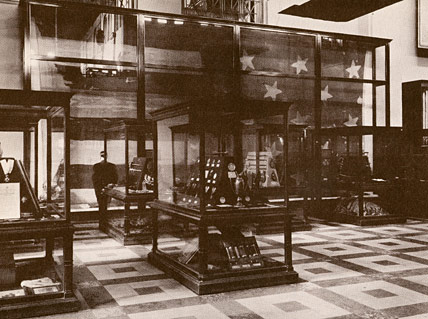 The Star-Spangled Banner on display in a case at the National Museum.
A central Flag Hall was incorporated into the design of the new museum to allow the entire flag to be displayed. The key element highlighting technology was a replica of Foucault's Pendulum. Hanging from the second-floor atrium, it swung over the inlaid compass rose on the first floor, through an opening between the first and second levels.

In August 1958 ground was broken for the Museum of History and Technology and the new museum opened to the public in January 1964. 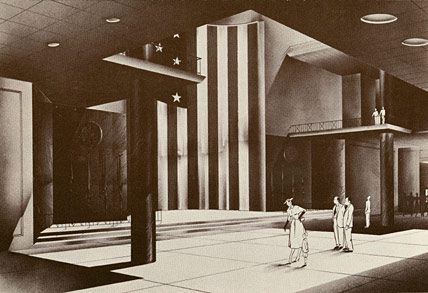 Rendering for the original Flag Hall.
As highlighted by the large, symbolic pieces—the pendulum and the flag—the first floor of the Museum focused on technology, while the second floor displayed objects relating to history. The third floor was comprised of changing galleries and displayed such items as stamps, money, and military history artifacts among other things. The Museum's plan called for modern methods and used escalators to transfer visitors between levels. These were seen as "innovative," says Aber, since they were the modern means of moving people in the 1960s and were far more efficient than elevators.

Part Two of "The Making of a Modern Museum," explores the ever-changing interior of the building and how current renovations will address issues that have been raised over the past 43 years of use. Read Transforming the Museum: Part Two.