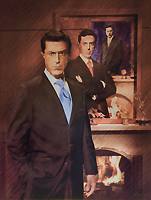 The portrait is not currently on display.

A series of segments on "The Colbert Report" in 2008 depicted comedian Stephen Colbert's quest to have his portrait accepted by one of the Smithsonian’s museums.  The portrait hung in the National Portrait Gallery through April 1, 2008.

More video clips:Stephen's search for a home for his portrait (January 2008)
Portrait goes on display in "Treasures of American History" (April 2008)
Director Brent Glass formally accepts the portrait into the Museum's collection (October 2008)