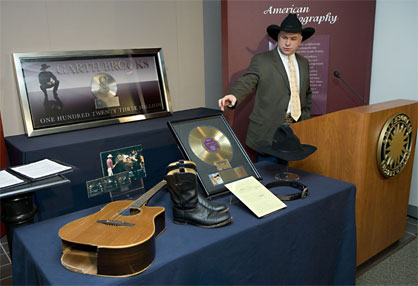 Brooks presented the museum with his first gold record and cassette he received for the 1989 album “Garth Brooks”; handwritten lyric sheets for the song “Beaches of Cheyenne,” which shows his revisions; a Takamine brand guitar, smashed by the artist during his first NBC television special, “This Is Garth Brooks,” filmed in Dallas in September 1991; elements of a typical stage outfit, consisting of a Mo' Betta shirt, black Wrangler jeans, black elephant-skin cowboy boots, a belt and a black Stetson Tyler cowboy hat with a label on the interior brim reading “made especially for Garth Brooks.” The donation also included the plaque for the special Career Award the Recording Industry Association America gave Brooks in recognition of his status as the new top-selling solo artist in recorded history with 123 million albums sold.

“Garth Brooks is a pivotal figure in contemporary music and his achievements, both commercial and artistic, are remarkable,” said museum director Brent D. Glass. “We are pleased to welcome his donation to the museum’s music and entertainment collections.”

Proof of Brooks’ legacy exists not only in his unprecedented record sales, but in his unique ability to cross musical boundaries. Successfully integrating rock elements into his recordings and live performances, Brooks rapidly dominated the country singles and country album charts and seamlessly crossed over into the mainstream pop arena, exposing a larger audience to country music than was previously thought possible. Brooks has enjoyed one of the most successful careers in popular music history, with some 70 hit singles, 15 charted albums, four albums exceeding 10 million in distribution sales and more than 123 million albums sold in the United States alone.

A selection from the new Garth Brooks collection will be on temporary display in the museum’s “Treasures of American History” exhibition at the Smithsonian’s National Air and Space Museum beginning in January 2008. “Treasures of American History” represents the breadth of American history, featuring an engaging mix of the famous and the familiar. The exhibition includes the Ruby Slippers, Kermit the Frog, Lincoln’s top hat, the Lewis and Clark compass, Custer’s jacket, the Greensboro lunch counter, Thomas Jefferson's bible and Edison’s light bulb.

The National Museum of American History collects, preserves and displays American heritage in the areas of social, political, cultural, scientific and military history. Documenting the American experience from Colonial times to the present, the museum looks at growth and change in the United States. The museum is closed for major renovations. For information about the museum, please visit https://americanhistory.si.edu or call Smithsonian Information at (202) 633-1000, (202) 633-5285 (TTY).