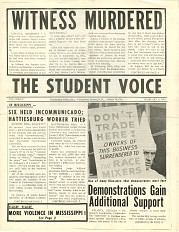 In the early 1960s, as the Civil Rights Movement swept across America bringing about massive changes in laws and in the way Americans thought about themselves and their nation, there was Mississippi. In 1955, the same year that Rosa Parks famously refused to give up her seat on a bus in Montgomery, Alabama, launching both the Montgomery Bus Boycott and the career of Martin Luther King Jr., a young boy, Emmett Till, was tortured, mutilated, and murdered for “talking fresh” to a white woman in the Mississippi Delta. In 1961, the same year that saw hundreds of Freedom Riders put their lives on the line to ride buses through the South and force the federal government to protect its citizens and enforce its laws, Mississippi farmer Herbert Lee was shot in the head in broad daylight by an elected Mississippi state representative for daring to persuade black people to vote.

The terrorism used to support white supremacy in Mississippi was as renowned as it was horrific. Many thought that racism and oppression in Mississippi were so deeply rooted that there was little reason to even try to enact change through nonviolent direct action. Many felt like Emmett Till’s uncle, Moses Wright, who, giving up hope for change after his nephew’s murder, declared that “they can have my part of Mississippi.”

Amazingly, not everyone was ready to give up. In 1964, thousands of Mississippians and college students from all across the country decided to attack the violence and hopelessness with peace, courage, and optimism. Freedom Summer planners and volunteers said they hoped the Mississippi Summer Project would “make Mississippi part of the United States.” They knew that simple and perfectly legal actions—helping people register to vote, teaching children and adults to read, or even sitting down and eating with someone of a different ethnicity—might get them killed.

They also believed that it might change the entire nation. If simple justice could be achieved in Mississippi just by young people organizing and volunteering for a summer, what did that suggest for the rest of the nation? Perhaps even more importantly, how would Freedom Summer affect the people involved in it? Taking on the daunting task of wading into nonviolent battle against unrestrained and brutal racial subjugation would forever change all who participated in Freedom Summer. Those experiences would be carried with Freedom Summer veterans and affect their work as the Civil Rights Movement continued, the conflict over the Vietnam War escalated, and as America struggled to decide what equality and democracy meant in the late 20th century. 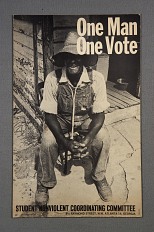 One Man, One Vote

How can we use the lessons from Freedom Summer to address today’s most intractable problems? In our National Youth Summit on Freedom Summer webcast, we revisited the history of Freedom Summer with Civil Rights Movement veterans, including Dr. Robert ‘Bob’ Moses and others, to discuss the Summer’s legacy and the lessons they see in the movement for young people today. Watch the archived webcast here.