Battle of the Sexes

While the male models engage in such sports or trade activities as hitting a baseball or hammering an anvil, the activities portrayed by women models are not always clearly related to the demands of work or “science.” Though women perform many of the same activities as the men, the female models’ movements are often accessorized with such narrative props as a fan, a bucket, or a cigarette. The props serve a storytelling purpose, helping to place the female models in an imaginative setting. These gendered studies, such as the series describing a woman dressing or dancing, suggest the broader context of the female nude in 19th-century art.

What can these activities show us about social attitudes toward gender?

Running, wrestling, boxing, baseball, tennis, weightlifting, and other sports are represented in Animal Locomotion. Muybridge often chose models for this study who had, in his words, a well-earned record in the particular feat selected for illustration.The model in the series below, dated July 6, 1885, is Percy C. Madeira. Detailed records regarding a models physical characteristics, as well as how much some models were paid, were kept in notebooks during the project.

Muybridge’s outdoor studio and a camera, seen in the cyanotypes, have been cropped in the final print. The circled laterals have been included in the print. Those crossed out have been omitted. 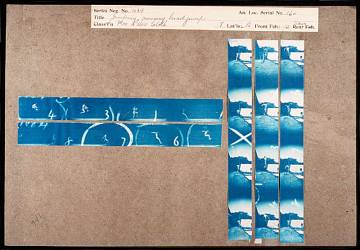 Here, a complete set of 36 views is divided into three final prints. Laterals, and front, and rear foreshortenings are separated. An odd arrangement of lateral views, not in chronological order, leaves frame 10 missing. 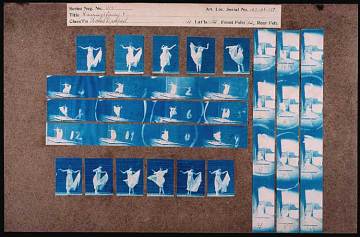 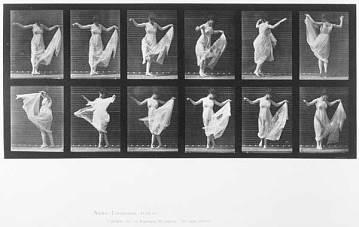 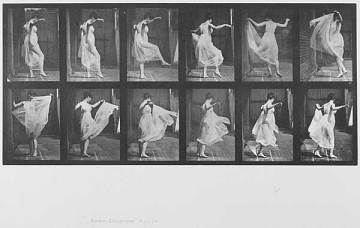 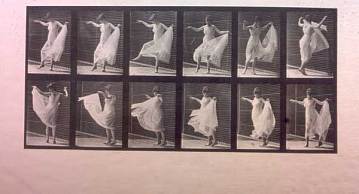 ‹ Sequences and Structures up Epilogue ›