y the 1860s, Eadweard Muybridge, born Edward James Muggeridge in Kingston-upon-Thames, England, had reinvented himself as Helios, one of San Francisco’s most important landscape photographers. His fame brought him to the attention of Leland Stanford, former governor of California, who hired Muybridge to get a picture that would settle a hotly debated issue: Is there a moment in a horse’s gait when all four hooves are off the ground at once? Muybridge took up the challenge in 1872. In 1878, he succeeded in taking a sequence of photographs with 12 cameras that captured the moment when the animal’s hooves were tucked under its belly. Publication of these photographs made Muybridge an international celebrity. 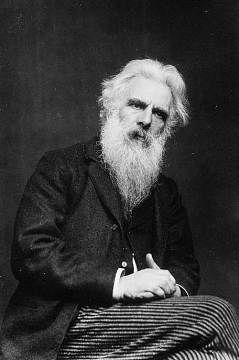 Muybridge’s five-month trip to the Yosemite Valley in 1867 yielded 260 published views, 160 of them stereographs. His were among the most celebrated images taken of the Valley. By the late 1860s, the widespread circulation of Yosemite images had made the region a mythic American landscape, redolent of the grandeur, expansiveness, and power Americans had come to associate with the West and, by extension, the nation as a whole. 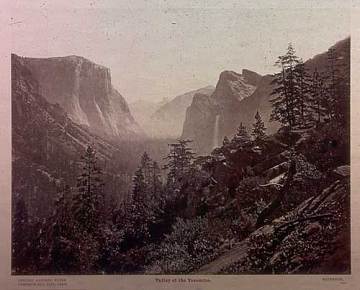 It took six years to produce the photographs Stanford sought. Muybridge’s experiments were interrupted in 1874 when he went on trial for the murder of his wife’s lover. Acquitted on grounds of justifiable homicide, he spent two years photographing in Central America before returning to Stanford’s farm. In 1878, Muybridge finally succeeded in photographing the horse in motion.

Muybridge used the wet plate process, a relatively slow method of photography. The resulting images were hardly more than silhouettes, but they showed what had never before been seen by the unaided eye.

Gaits of the Horse, by E. Muybridge Lantern slides from original photographs made for Leland Stanford, Palo Alto, California, 1878

Muybridge’s success in photographing the horse in motion brought him national and international fame. Scientific American, among other publications, ran articles acknowledging Muybridge’s accomplishment. However, when Leland Stanford asked his close friend and horseman Dr. J. B. D. Stillman to publish an analysis of the horse in motion, Stillman used Muybridge’s photography to illustrate the book without crediting the photographer. 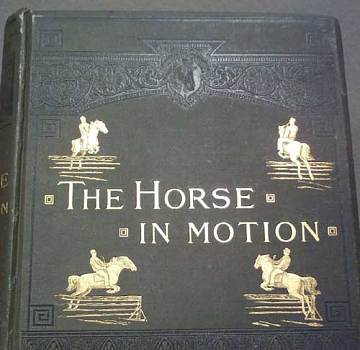 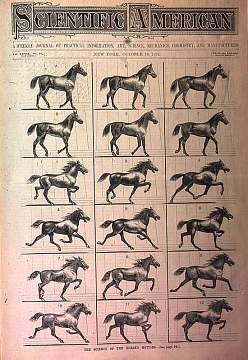 In the 19th century, the horse was as important to work and leisure as the automobile is today. Knowledge of the horse’s gaits, therefore, was especially valuable, particularly to racehorse owners like Leland Stanford. Many attempts had been made to capture the horse’s motion before Muybridge’s success. One such effort, in the form of graphs made by the French physiologist Etienne-Jules Marey, inspired Stanford’s project. Marey’s tracings showed that a galloping horse was suspended in the air for a moment. Stanford, however, wanted an image made by the camera—the machine that, some argued, could not lie. 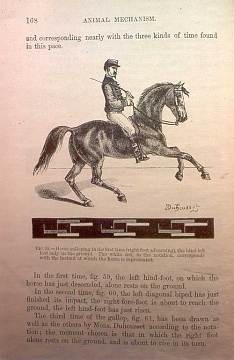 Designed by telegraphers from Leland Stanford’s railroad, this model is a prototype of the type of camera shutter and background used for Muybridge’s set-up at Stanford’s Palo Alto, California, horse farm. 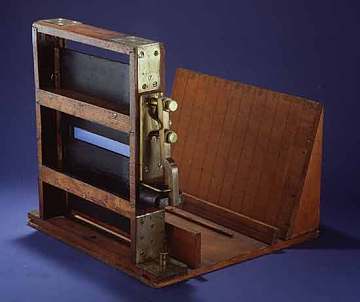 Muybridge patent model of method and apparatus for photographing objects in motion, March 4, 1879