We expect any sequence to be orderly, logical, and progressive. The sequence cues us to believe that the action represented is continuous and ongoing, and that it takes place exactly in the order in which we see it reproduced.

Our perception is so bound to our belief in the sequential structure that we can overlook the black borders marking off each individual frame and fill in parts that are missing, the inexplicable gaps between the separate phases of the movement.

The sequence directs us to cooperate in creating the illusion of motion even where there is none. These images were taken simultaneously by six cameras placed in a semicircle around the subject. The camera shutters were triggered at the same time. The result is the same action captured from six angles. No final print was made from this series.

Muybridge has compiled this collotype from four sets of cyanotypes, only one of which survives. Each of the four sequences shows a single frozen instant from six different angles. Muybridge has assembled the sequences to create a pleasing artistic effect. If you read the images vertically, you are aware of a sharp front-and-back rhythm, while the horizontal movement gives the sensation of time unfolding as the eye slowly moves around the figure with each frame. Typically, the female model is depicted with a prop. 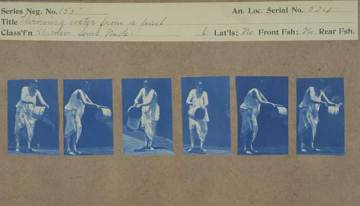 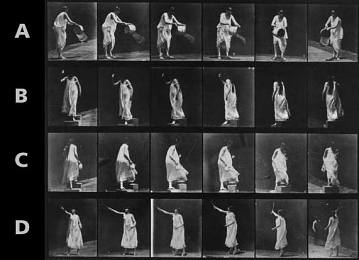 ‹ You Be the Detective up Battle of the Sexes ›