Girls get to go to school. That was revolutionary back in the 1700s, when the nation was founded. Until then only a few men were educated, if they were merchants, lawyers, or leaders. Democracy changed that. As future mothers, many believed that girls needed an education to raise the next generation of citizens.

But it's complicated. School was only available to those who could afford it.

At school, most girls sewed samplers to learn to read, write, and reason. Needlework also provided a valuable skill that gave women and girls a way to make a living. A seamstress could operate an independent business from her home. Women valued this work because it was safer than working in another person's home or business. Elizabeth Throckmorton was 10 when she made this sampler. 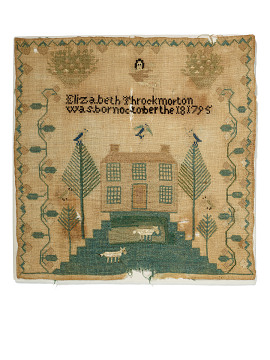