Who Pays for Education?

From the nation’s beginning, Americans have grappled with who gets educated and who pays for education. Both public and private schools have relied on a combination of public and private funding. Disparities in wealth and political influence have affected Americans’ ability to support schools. As a result, educational philanthropy has reflected inequalities in the American economy and society. Giving through contributions of time and money has both created opportunities for students and increased inequalities among them. In the case of the industrial schools explored here, some white reformers used their privileged positions in attempts to assimilate minorities to the dominant culture, while in other instances, communities used the industrial school model to meet their own needs. 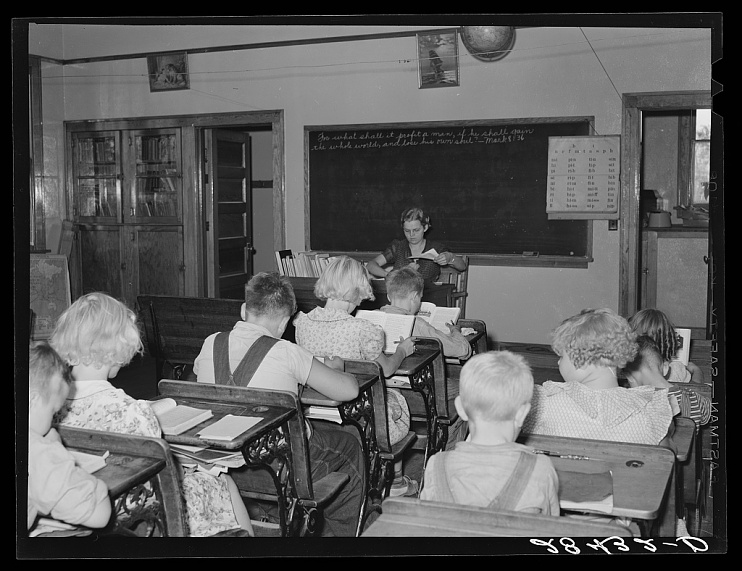 Americans have long levied taxes to fund education while attempting to keep costs down. White male voters in a growing Massachusetts town approved the construction of a new public school. The builder of this school was required to build it in a “plain but workmanlike” manner. Beyond paying taxes, communities have helped to fund schools through giving time, money, and supplies. This portable library is typical of one that hung on school walls in the 1800s. In some schools, a portable library was purchased through community donations, while in others, an individual donated one. Property taxes have been levied to help pay for public education since the colonial era. Property-tax-based school funding has contributed to educational inequality. Wealthier districts typically have more tax money to spend per student. This property tax receipt from Texas includes taxes that would have supported public education. Most public school teachers provide classroom supplies using their own funds or by raising money. Educator Teresa Danks Roark’s roadside fundraising in Tulsa, Oklahoma, went viral in the summer of 2017. 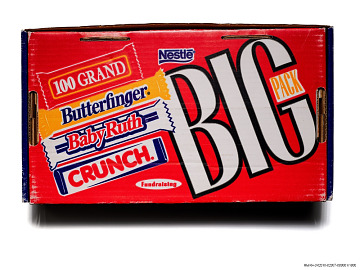 Schools have enlisted students in fundraising to support educational activities. Businesses have profited from developing fundraising products specifically for schools and youth activities. This portable box was used by a public school student to raise funds in Selma, California, in the early 2000s. 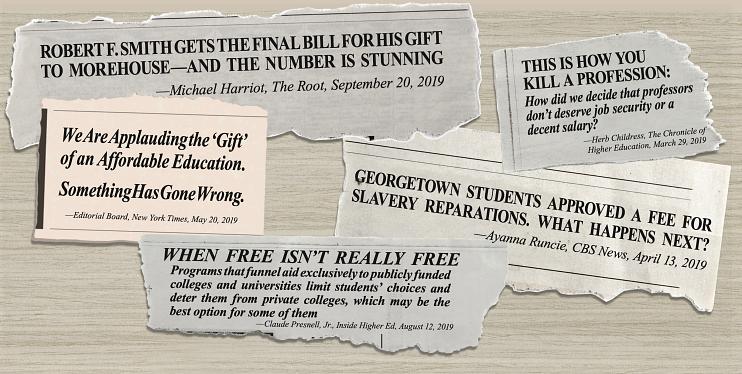 Student debt, underpaid adjunct faculty, the rising cost of higher education, and universities’ ties to American slavery were all topics of debate in media sources across the United States in 2019. These conversations have roots in earlier era’s debates and decisions about the economy, education, gender and racial equality, and more.

In the late 1800s, many Americans embraced industrial schools in efforts to train and reform children who were typically from immigrant or working-class backgrounds. Industrial schools offered vocational training intended for children to develop skills that would help them find jobs.

In some cases, communities supported industrial schools as a way to meet their own needs. In other cases, privileged white reformers from outside particular communities established schools in efforts to train and acculturate children based on their own paternalistic views of what was best. Reformers’ views were often at odds with those of the community that the reformers intended to serve.

The Wilson Industrial School for Girls was founded in the 1850s by white middle-class reformers who believed that the children of predominantly Irish, working-class immigrants living in New York City’s Lower East Side needed “intellectual and moral improvement.” These reformers described their work as saving children from the vices of their parents, whom they often depicted as destitute drunkards. Poverty was widespread, but reformers were quick to attribute poor living conditions to the moral failing of parents, rather than economic inequality.

Female students were taught housekeeping skills that would allow them to work as domestic servants, as well as dressmaking and other trades.

The school was funded through monetary contributions, the donation of material items that could be used by the school, and income from students’ work in dressmaking and tailoring. 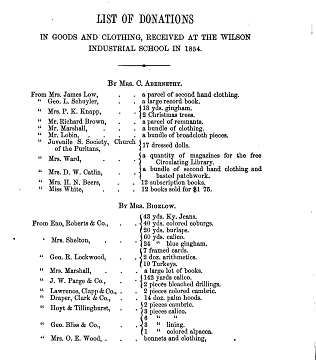 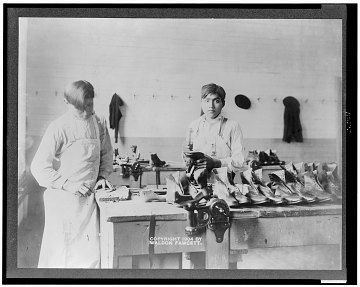 Founded in 1879, the Carlisle Indian School was the first federally funded off-reservation boarding school for indigenous children. Education at this school was intended to erase native culture. Vocational training at schools like Carlisle reinforced white gender roles and stereotypes. Girls were taught to cook, clean, sew, and do laundry, while boys were taught shoemaking, farming, blacksmithing, and other trades considered useful for assimilating into white society.

The erasure of native culture was extensive. Students were forced to adopt a new language (English) and religion (Christianity), wear Euro-American clothing, and change their everyday lives. They were not allowed to practice indigenous arts or trades. 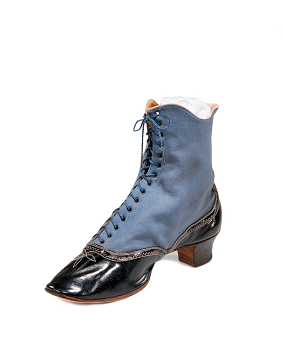 Shoe made at Carlisle Indian School, 1885

This woman’s shoe was made by Carlisle students who were taught to make and repair shoes in styles worn by most Euro-Americans. The school prided itself on the fact that it could repair all students’ shoes on the campus, thereby saving on operating costs. 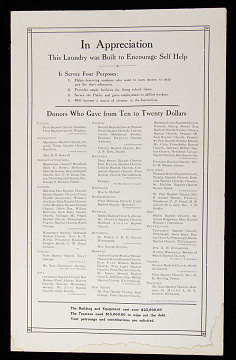 To promote independence for African American women and girls in the face of racist limitations on their opportunities, Nannie Helen Burroughs founded the National Training School for Women and Girls in 1909 in Washington, D.C. African American donors throughout the United States gave to support its expansion. The commercial laundry they helped fund was both a teaching space and a source of income to support the school. The National Training School for Women and Girls was part of the industrial school movement to teach employable skills. Classes included dressmaking, hairdressing, book-keeping, waitressing, typewriting, laundering, and missionary training, along with music, English, history, and science classes. This cup and saucer were used by students, many of whom boarded at the school.

Barred from schools for white children due to racist practices, African Americans in the late 1800s established and supported a wide variety of educational institutions of their own. In the early 1900s, Southern state and local governments funded white and black children’s public educations separately and unequally. (Many Northern schools were also segregated due to residential segregation and, in some cases, the law.) In the face of laws that enforced racial segregation and severe underfunding, African Americans contributed their own funds to support schools. In the 1870s the Fisk University Jubilee Singers began touring the United States and Europe to raise money for the African American school. Familiarizing white audiences with black spirituals, the group also advocated for African American rights and independence.

In the Paper Lab:
Conservation of the Fisk Diorama 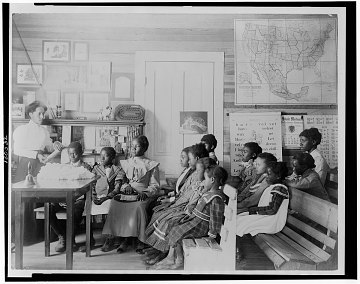 Washington’s racial-uplift philosophy was controversial within the African American community because he was reluctant to upset the racial hierarchy through political agitation and instead emphasized self-empowerment through vocational training as a means of advancement. Students learned agricultural work and trades, such as bricklaying, carpentry, and printing. In this photograph, students were learning about agricultural crops. 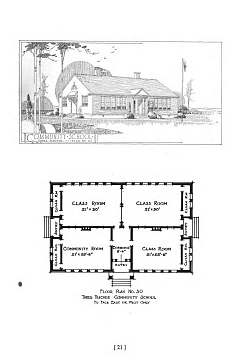 In 1912 Booker T. Washington initiated a partnership with philanthropist Julius Rosenwald to provide better education for black children. The Rosenwald Rural School Initiative worked with communities to award matching grants that resulted in the construction of over 5,000 schools in fifteen southern states by 1933. Although Rosenwald collaborated with African Americans, the Initiative accepted segregation and gained support from white Southern leaders.

The Rosenwald Fund issued plans for different school sizes. Lighting and ventilation were important aspects of these designs. The school in Jonesboro, Georgia, was similar to this “three-teacher” floor plan. 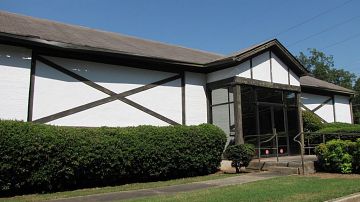 Eula and Lillian Arnold’s father, J. W. Arnold, helped to secure a Rosenwald School for Jonesboro’s black students in the early 1930s. The Rosenwald Fund required African Americans to contribute cash and in-kind donations of labor and building materials to match the organization’s grants. The school initially cost $5,325. The grant covered 20 percent of the costs. In addition to African Americans’ contributions, funds also came from the public treasury and white donors. 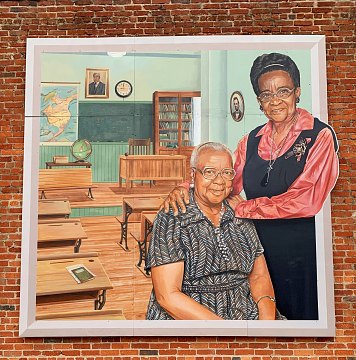 When they retired, the sisters volunteered in the community and taught for HeadStart, a federally-funded early childhood education program. A mural based on a photograph of the sisters was painted by Georgia artist Shannon Lake as one of four scenes of local history for the Arts Clayton Gallery.

‹ What Do We Give? up Giving and Health ›