Where the Stores Were

Where the Stores Were 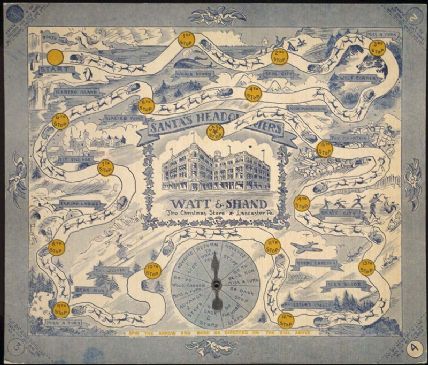 “Santa’s Headquarters,” souvenir board game, Watt & Shand, Lancaster, Pennsylvania, about 1928
Smaller department stores used holiday display to burnish their reputations and made the downtown shopping district the place to be. In cities large and small, Christmas displays became the goal of family outings, while reinforcing the store’s identity as a leading retail institution. 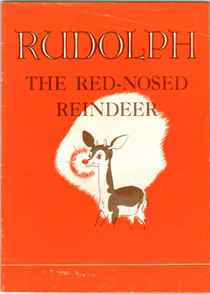 Souvenir children’s booklet, Rudolph the Red-Nosed Reindeer, Montgomery Ward & Co., Chicago, Illinois, 1939
The most popular character ever created by a store—with a story line to boot—is Rudolph the Red-Nosed Reindeer. Rudolph was created by Montgomery Ward advertising copywriter Robert L. May, who was employed to write product descriptions for the chain’s catalog. May’s endearing tale debuted as Ward’s children’s souvenir in 1939. 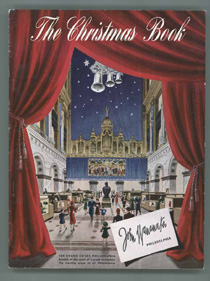 Catalog front cover, “The Christmas Book,” John Wanamaker Philadelphia, 1940
The Wanamaker stores emphasized high culture, offering displays of sculpture, painting, and tapestries, and daily organ concerts. Artistic themes were especially apparent at Christmas and Easter, when ornamentation in wood, stone, and plaster of Paris reflected the founder’s belief in quality and “the real thing.” After John Wanamaker’s death in 1922, the rules relaxed a little: the Christmas bells installed in the Philadelphia store in 1940 were made of papier-mâché.
The department store was the place where many Americans first encountered enchanting displays and special effects that became a memorable part of a city’s social fabric. While stores discovered that holiday display was a motivator of shoppers, the memory of those wonders became the most powerful motivator of all.
‹ Storybook Style up Holidays on Display is made possible by generous support from Macy’s ›