In honor of Veterans Day

I recently had the opportunity to head over to the Lincoln Memorial to take some photographs for the interactive that will be featured in the new Albert H. Small Documents Gallery when the museum opens. It has been quite some time since I’ve visited anywhere in D.C. with the opportunity to play tourist. I took advantage of my field trip and stopped briefly at the World War II Memorial, which I haven’t seen before, and is a beautiful tribute to our armed forces. 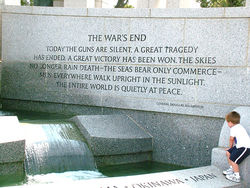 The most interesting thing, in my opinion, was not the stone and water that make up the memorial, but rather watching diverse generations interact. I saw elderly men dressed in coats or hats indicating their military backgrounds. They  were talking with their children and what I presumed were their children’s children. Our military is an integral part of who we are as a nation and has played a defining role in our history. Our exhibit honoring and preserving that memory, The Price of Freedom: Americans at War, tells the story of our armed servicemen from the French and Indian War to Operation Iraqi Freedom. This exhibition will reopen along with the museum on November 21 and is large enough to accommodate all the generations in your family!

And if you’d like another way to honor our nation’s veterans, you can make a tax-deductible donation to the museum in the name of your loved one.

Daniel Hoerr is an assistant in the New Media Department.