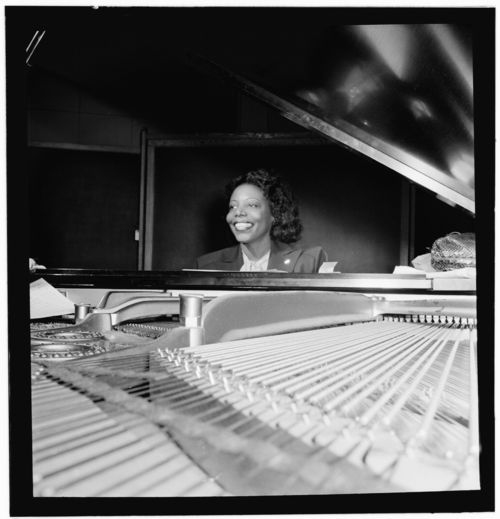 Mary Lou Williams was a jazz artist who articulated the history, culture, and heritage of a people and a nation through the music she composed and performed. An All About Jazz article by writer Teri Harllee highlights Ms. Williams as the only major jazz artist whose career spanned every musical era in jazz history. As shown by our collections, we have examples of her boogie woogie music as well as later compositions that were arranged for big bands, including “Scorpio,” which she arranged for the Duke Ellington Orchestra in 1946.

Listen to the Smithsonian Jazz Masterworks Orchestra perform this piece on Public Radio International’s “Jazz Smithsonian” program, which originally aired on May 23, 2000.

Her vision and jazz experience is succinctly captured in the Jazz Tree that Ms. Williams created with artist David Stone Martin in 1977. At the root of the tree is “Suffering” born of the slave trade and resulting legacies of slavery. The Blues frames the outer trunk. Spirituals, Ragtime, Kansas City Swing and Bop rise inside the tree trunk, and jazz luminaries sprout from the leaves like a bushy afro. The tree creates a jazz timeline that illuminates a musical genealogy of the African American experience in America.

This experience is also reflected in The Kinsey Collection, on view at the museum through May 1, and the slave shackles from the popular culture film Roots. Sheet music, contemporary to Ms. William’s early career, contained examples of stereotypical views of African Americans in popular culture, sometimes degraded by themselves: “Mammie’s Pickaninny Boy” and “All Coons Look a Alike to Me”.

Fr. Peter O’Brien, Society of Jesus, was Ms. Williams’ last business manager and continues to direct the Mary Lou Williams Foundation, where her musical and cultural legacy is extended through education programs. Recently Fr. O’Brien’s reflections on Mary Lou Williams appeared in a Smithsonian Folkways article, and in 1994, he participated in the Smithsonian’s Jazz Oral History Program where he discussed Ms. Williams and her impact on his life.

A catalyst for cultural understanding and transformation

According to Dr. Billy Taylor, the late jazz educator, composer, and musician, Mary Lou Williams remarked that “If we are to make progress in modern music, we must be willing and able to open our minds to new ideas and developments." In 1996, Dr. Taylor presented a bold, new idea to the Kennedy Center: let’s launch a Women in Jazz festival honoring Mary Lou Williams. The response was, “Will there be enough women to perform at the event?” No problem, Dr. Taylor assured skeptics.

Held every May at the Kennedy Center, the Mary Lou Williams Jazz Festival is an annual, seminal event presenting workshops and performances by veteran and emerging jazz women. These vocalists and instrumentalists pay tribute to an artist that most believe to be the greatest jazz woman who ever lived, and many, past and present, view her gender as irrelevant to her accomplishments. In the Joan Burke documentary on Mary Lou Williams, saxophonist Buddy Tate noted: “She was outplaying all those men. She didn’t think so but they thought so.”

In Ms. Williams’ later years, she became a teacher at Duke University, which also saw her legacy and creativity as emblematic of its social and educational changes. On March 8, 1961, Duke’s board of trustees announced that students would be admitted to its graduate and professional schools without regard to race, creed or national origin. Three African American students enrolled that September in the law and divinity schools.

The policy was extended to the undergraduate school about a year later and in September of 1963 the first black undergraduates were admitted. Civil rights advocacy lead to admission changes but Mary Lou Williams and jazz were selected to brand Duke’s new center for black history and intercultural engagement that emerged later.

The Mary Lou Williams Center for Black Culture was established in 1983, six years after Ms. Williams became the university’s first-ever “artist-in residence,” a position she held until her death in 1981. The Center promotes racial understanding, community building, and appreciation of the black experience in America by increasing and presenting knowledge about African American people, history, culture, and contributions of the African diaspora. Programs developed by the Center include regular jazz performances featuring local and guest jazz artists and students from the Duke University Jazz Studies Program; exhibitions such as “Women of the Blues”; and recognition of black achievement such as contemporary black inventors.

Through the Center, jazz and Mary Lou Williams are instruments of domestic cultural diplomacy and inclusion.

Check out a a podcast and teacher guide from the Smithsonian Jazz Masterworks Orchestra’s Executive Producer, Ken Kimery.

Mary Lou Williams recorded extensively for Folkways Records, and Smithsonian Folkways re-issued many of those recordings in recent years. In addition, a rare big-band rendition of “Virgo” from her “Zodiac Suite” is one of several Williams contributions included on Jazz: The Smithsonian Anthology. Hear a rehearsal of “Little Joe” by Mary Lou Williams and the Chosen Five, from the 1950 Folkways album Footnotes to Jazz, Vol. 3, Rehearsal, I.

Editor's Note: This year's Jazz Appreciation Month poster features Mary Lou Williams. The graceful portrait of Ms. Williams was developed for JAM by Keith Henry Brown, a young African American artist with a passion for jazz and a legacy as the former Creative Art Director for Jazz at Lincoln Center. To request a copy of the poster, write jazz@si.edu. Or, you can download it here it in PDF format.