During the 1970s the museum purchased a small collection of printing blocks purported to have been used to produce Civil War issues of Harper’s Weekly. I’ve been interested to research the history of the blocks for some time, and have hoped to find the images in print in order to catalog them properly and identify their subjects, titles, and artists (both original and graphic, such as the engraver). As the full run of Harper’s Weekly is now digitized and online I, with the help of more than one intern, was able to determine that none of the blocks in this collection were published in Harper’s Weekly.

So where did these printing blocks come from? Through more research, I did discover several of the printed images in a two-volume, post-War, 1885 publication, The Pictorial Battles of the Civil War…. by Benjamin La Bree. The title page of Volume II records that the La Bree’s volumes are “illustrated by upwards of 1000 engravings made during the War from sketches by artists….” The publisher of the 1885 volumes was The Sherman Publishing Company of New York, which could have retrieved the blocks from some local repository. New York City’s Lower Manhattan was a hub of wood engraving establishments during this period, with potential stockpiles of used engraved blocks. 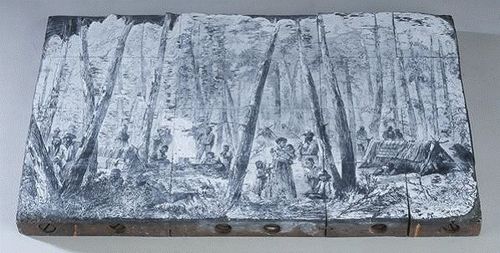 The 1885 printed title for the above chalk-filled engraved woodblock was “Refugee Negros Encamped Near Bergen Point, N.J. During the Riot in New York” The image was reproduced on page 232 of The Pictorial Battles of the Civil War, Vol. II, Sherman Publishing Co., New York, 1885. 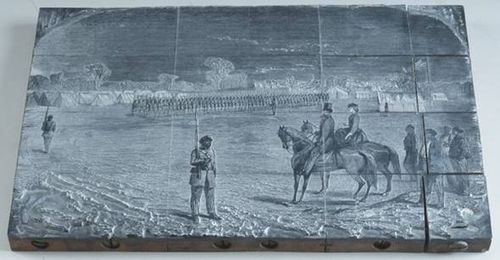 This chalk-filled engraved woodblock was title “Camp of the First District Negro Volunteers on Mason’s Island, Opposite Georgetown, D.C.” The image was reproduced on page 187 of The Pictorial Battles of the Civil War, Vol. II, Sherman Publishing Co., New York, 1885.

Beginning in the mid-19th century, imagery began to be a much used addition to the printed word. Earlier use of imagery was generally limited to a small number of simple line drawings used in books, or for newspaper headlines, almanac covers, and the like. The Civil War must certainly have been an incentive to journalistic efforts to produce as many images as possible, if for no other reason than to answer readers’ demands for more information about the events of the war and the activities which may have affected their loved ones.

Wood engravers were copyists and elaborators of imagery prepared in the field by illustrators and photographers who were sent out by newspapers and publishing houses to record the events of the war. The published paper engravings are often all that remain of the work of the original illustrators, photographers, and engravers.

By 1870, publishing establishments like Harper & Brothers, and their rival, Frank Leslie, are said to have together “employed approximately one hundred of the four hundred or so engravers in the country . . . In 1869, Harper and Brothers employed steadily thirty-five engravers, and the house of Frank Leslie an average of sixty.”* During the war, each issue of Harper’s Weekly, only one of the company’s many products, used about 40 engravings, some filling a full spread, others filling one page and many sharing a page with some ten others. Each full spread engraving could require a full day’s work by several individuals who prepared, at least for the Harper’s establishment, some of the finest wood engravings of the time.

What happened to all of those blocks? Traditionally, engraved blocks were kept for reprinted editions by either the publisher or the client, or thrown away. Why were our printing blocks kept, and by whom? It appears the imagery was considered important enough in the 1880s for The Sherman Publishing Company to reproduce in their set of large coffee table volumes. Perhaps the publication was a response to the slew of other pictorial Civil War volumes produced by other companies during this period. In any case, the republishing of the engravings seems to have been an impressive undertaking.

Three of the finer engraved wood blocks in our collection are reproduced here. Two of them were reproduced in the 1885 publication and we at least know their titles. The third, of the building marked “Howard House,” does not appear in the 1885 publication and does not quite fit other illustrations imaging what might be the Howard House in Elkton, Maryland, or the Howard House in Ellicott City, Maryland.

This chalk-filled engraved woodblock of the Civil War period may depict the (riots at) Howard House (in Ellicott City, Maryland). The location for a print of this block has yet to be discovered.

As for the original publisher of the engraved images, the research goes on. Logical next steps include researching other weekly or monthly illustrated newspapers of the period like Frank Leslie’s Illustrated Newspaper. An eye to the style of engraving and a modicum of patience should produce some results!

Joan Boudreau is Curator, Division of Culture and the Arts at the National Museum of American History.