"With great good nature": an unfamiliar portrait of George Washington

Two hundred and thirty years ago, on December 23, 1783, George Washington willingly resigned his commission as commander-in-chief of the Continental Army. This momentous act of leaving control of the United States to the civilian government helped to solidify Washington as an American icon. Washington's popularity soared, and his image has been the subject of many forms of art ever since. Intern Matthew Skic delves into the story behind a lesser-known portrait of our Founding Father.

I consider myself more than your average, run-of-the-mill George Washington fan. That fandom began at an early age when I read my first book about his achievements. I have traveled to many spots associated with him, walked in his footsteps, and even crossed the Delaware. The General is truly an inspiring figure to me and I encounter his legacy every day. His likeness travels everywhere with me, whether on the obverse of the quarter or by way of Gilbert Stuart's portrait of Washington on the one dollar bill. 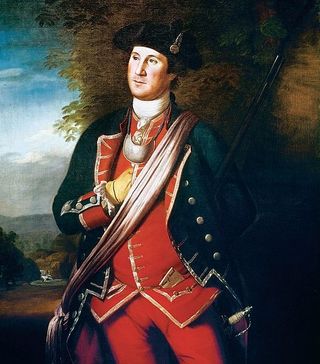 This oil painting by Charles Willson Peale is the only authenticated pre-Revolution portrait of Washington. It depicts him in 1772 in his Virginia Regiment colonel's uniform, which he wore during the French and Indian War. Image courtesy Lee Chapel & Museum, Washington & Lee University.

As I continue my ceramics cataloging project, I routinely see General Washington's face printed on many creamware examples. One depiction of the General, transfer printed onto a small tea caddy made by the Wedgwood Pottery Company, stood out to me when I saw it, not because of its size or color, but because of its unfamiliarity. I immediately wanted to know the specifics about this unfamiliar image. After some digging, I discovered the artist's name: Pierre Eugène Du Simitière.

This image of General Washington in his uniform as Commander-in-Chief of the Continental Army decorates creamware examples. Washington wears his hair clubbed and has epaulettes on his shoulders and a silk sash across his chest.

Pierre Eugène Du Simitière is certainly not a household name today. However, Du Simitière led an interesting life that, as it turns out, was deeply connected to museums. Born September 18, 1737, in Geneva, Switzerland, Du Simitière settled permanently in Philadelphia, Pennsylvania in 1774 and became a member of the American Philosophical Society, serving as one of its curators. In 1782, he even opened a small public museum out of his Philadelphia home displaying "natural and artificial curiosities," paintings, and other objects he owned. 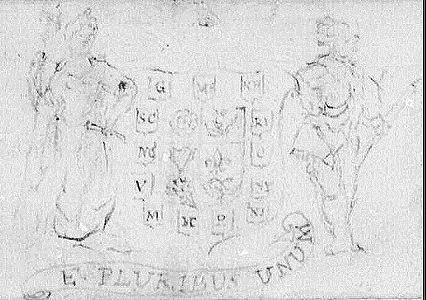 Du Simitière contributed to the design of the Great Seal of the United States. His early sketch includes the E Pluribus Unum motto, the Eye of Providence, and the outline of a shield, all of which were used in the final design. Image courtesy Library of Congress.

Du Simitière's talents as an artist precipitated his relationships with famous Americans of the Revolutionary War time period. For instance, in 1776 Du Simitière helped a congressional committee composed of Benjamin Franklin, Thomas Jefferson, and John Adams design a seal for the newly declared United States. Du Simitière's contemporaries certainly thought highly of his talents, and in 1779, General Washington came to Du Simitière's house to sit for a portrait at the request of John Jay. Pierre recorded this occasion in his notebook, "The general... came with [Jay] to my house this morning & condescended with great good nature to Sit about ¾ of an hour for the above likeness." 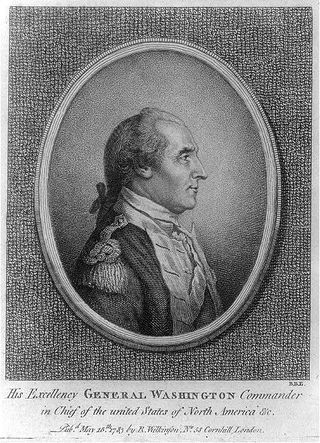 A series of problems prevented Du Simitière from making a profit from his artwork, but the portrait of Washington became popular in Great Britain following its inclusion in two separate sets of portraits of famous Americans published in 1783. As a result of these published sets, the Wedgwood Company chose to use this portrait of Washington on some of its creamware products to satiate the American enthusiasm for George Washington following the Revolutionary War. 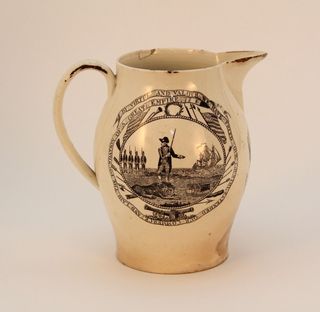 This print is based on a seal designed by William Duke Moore in 1783. Washington wrote a letter to Moore saying that he was "extremely flattered by this mark of attention."

Du Simitière's profile sketch, executed just seven years after Charles Willson Peale's 1772 painting of Washington in his Virginia Provincial uniform, represents one of the earliest portrayals of Washington from life. While a few portraits of Washington have become American icons, others have been overlooked by the modern viewer. The 1772 Peale painting is my favorite portrait of Washington. Which one is yours?

Matthew Skic is a curatorial intern in the division of Home and Community Life and is studying history at American University in Washington, D.C. He has previously blogged about other interesting examples of creamware in the museum's collection.